The Sackler family made billions from OxyContin. Will they face repercussions?

Purdue Pharma is going bankrupt. But the family that owns much of it has allegedly been slowly siphoning money 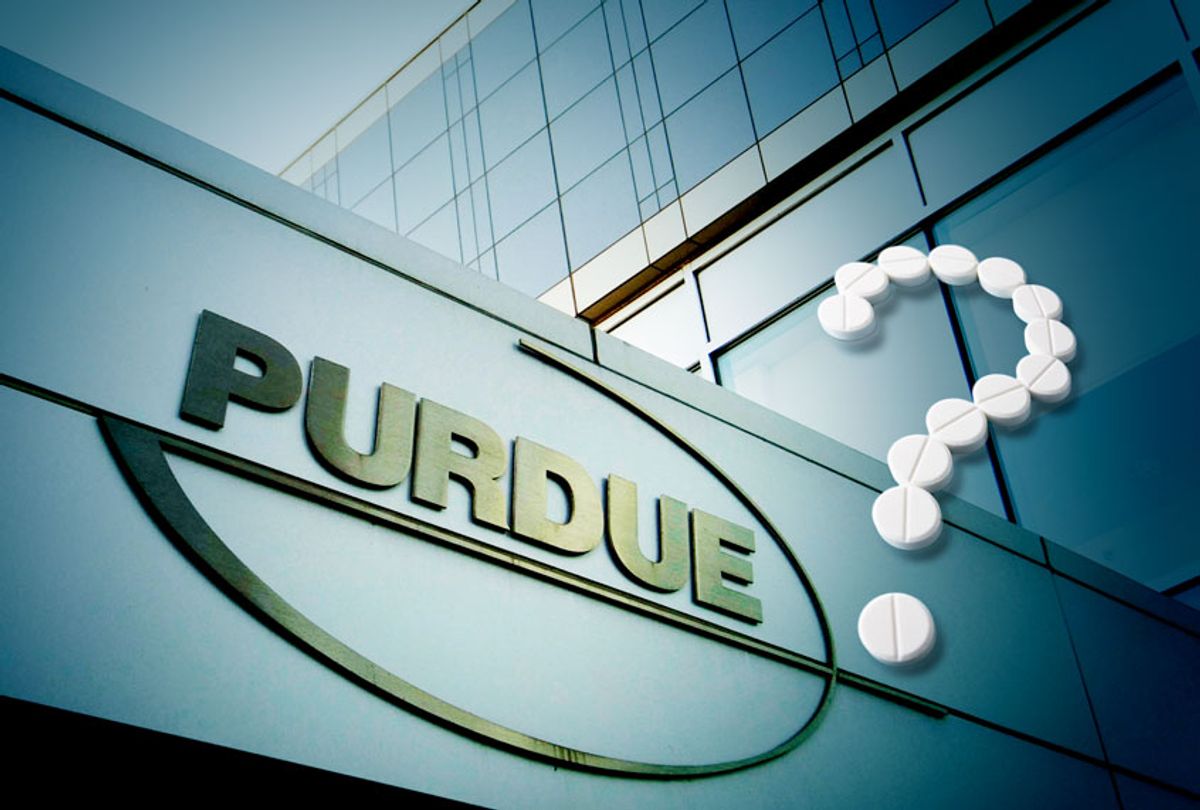 Purdue Pharma, makers of OxyContin, the highly-addictive drug widely seen as triggering the prescription opioid epidemic, filed for Chapter 11 bankruptcy last week in an effort to shield itself and its owners from more than 2,600 federal and state lawsuits.

The terms of the filing, which includes a proposal to resolve litigation, have been hotly contested by a group of states that have refused to settle with the pharmaceutical giant and have indicated they will continue to pursue the company's owners, the Sackler family, infamously one of the wealthiest families in the United States.

The company has been accused of fueling the nationwide opioid crisis that has claimed the lives of more than 400,000 people between 1997 and 2017, according to the latest data. States and local governments have alleged the company engaged in aggressive and deceptive marketing tactics that overstated the benefits of opioids and downplayed their risks. Purdue and the Sacklers have denied they are responsible for the public health crisis.

Purdue is seeking to restructure completely, with an exception that the settlement will protect the company from all litigation.

The pharmaceutical giant would pay roughly $3 billion cash over seven years to the plaintiffs and sell their Britain-based drug company, Mundipharma. The proceeds from that sale could add "substantial further monetary contributions" to the settlement agreement, the company said in a statement last week. In addition, future revenue from the company's sale of OxyContin and other drugs would go into the trust. The new entity would comply by restrictions on the marketing and sale of opioids. The whole deal is valued at $10 billion to $12 billion.

In turn, the Sacklers would relinquish control of the company, declare it and related corporate entities bankrupt, and convert it into a "public benefit trust" designed to produce addiction treatment and anti-overdose drugs. The anti-addiction drugs would be provided to the public at no or low cost.

Response to the proposed settlement

The worth of the settlement has emerged as a point of contention in negotiations with states and local governments. In its statement announcing the filing, the drug manufacturer listed as much as $10 billion in assets. But some states who have sued the company have cast doubt on those numbers.

The state of Massachusetts claims the Sacklers paid themselves and their family more than $4 billion between 2008 and 2016. Oregon said in a lawsuit the family may have siphoned as much as $11 billion from the company.

And, last week, New York Attorney General Letitia James claimed that her office uncovered wire transfers of about $1 billion by the Sackler family that fueled speculation that the family is trying to shield their money from litigation.

Purdue has rejected the charges, but the alleged multibillion dollar wire transfers have emerged as a major sticking point in the company's plan to settle thousands of lawsuits against it.

Two dozen states, including Connecticut, Massachusetts, New York, North Carolina, Pennsylvania, Virginia, as well as the District of Columbia, have not signed on to the agreement.

Many states have rejected the deal, arguing it does not provide enough money or adequately hold the company accountable for its alleged role in fueling the opioid epidemic. Pennsylvania Attorney General Josh Shapiro, for one, called the settlement a "slap in the face to everyone who has had to bury a loved one due to this family's destruction and greed."

Some of the opposing states objected the resolution because it offers payments generated in part from future sales of OxyContin in the United States and abroad — rather than all of it from the Sacklers themselves.

The 25 states that have signed onto the deal — including Florida, Michigan, Tennessee, Texas, West Virginia, as well as representatives for some 2,000 local governments — have said the proposed deal would provide billions in funding that governments could funnel into drug treatments and policing budgets.

Purdue settled with Kentucky for $40 million in 2015, and with Oklahoma for $270 million in March. It won a victory in May when a North Dakota judge tossed out the state's lawsuit against the company.

Would a bankruptcy protect the Sacklers?

It remains unclear whether the individual members of the Sackler family who have been sued would benefit from a bankruptcy.

Typically, as soon as a company files for Chapter 11 bankruptcy, all pending and future lawsuits against it are automatically halted. But in this case, Purdue also asked the court to extend bankruptcy protection to third parties, including the Sacklers.

On Wednesday, Purdue's lawyers asked a judge to pause all litigation against the company and the Sacklers for roughly nine months while settlement details are negotiated with plaintiffs who won't sign on to the deal the drugmaker has offered.

The company warned that the family could withdraw their pledge to pay $3 billion as part of the agreement if the bankruptcy judge, Robert Drain, does not block outstanding state lawsuits against them. Purdue's lawyers said the legal costs from the pending litigation — which it estimated is costing the company about $5 million a week — will "destroy hundreds of millions of dollars or more of value available for all claimants and for the public."

If the family must keep paying state judgments, they "may be unwilling — or unable — to make the billions of dollars of contributions" detailed in the settlement, the company's lawyers wrote in the complaint. Allowing the cases against "existing shareholders and their affiliates risks toppling" the agreement.

It also noted employee morale had decreased, top talent has been difficult to attract and retain (necessitating the payout of millions of dollars in bonuses to employees) and many executives were distracted by pending litigation. The value of the company and its ability to "maximize the benefits to all claimants" will "continue to be rapidly eroded" by pending litigation, the company's lawyers said. No members of the Sackler family are employees of the company.

Danielle D'Onfro, professor at Washington University School of Law and bankruptcy expert, told Salon that she expects there to be significant opposition over Purdue's request for a third-party release because  "it's not clear that bankruptcy courts have the power to give these kinds of releases. . . . If anything in this case were to eventually end up in the Supreme Court, it would probably surround a third-party release question."

Some states have already spoken out about the request. Massachusetts Attorney General Maura Healey, who has sued both the company and members of the Sackler family, said she would oppose it.

"This filing isn't a surprise. It's yet another effort by Purdue to avoid accountability and shield the Sackler family fortune," she said.

How would money from the settlement be divided?

D'Onfro, the law professor, said it remains unclear how the bankruptcy court will divide and determine the value of claims because the proposed settlement involves many entities who represent scores of other people.

"It's hard to know right now, at the moment of bankruptcy, what all the harm (of opioids) is going to be," she added. "Health officials have no idea what are the long effects of babies born dependent on opioids or the long term effects of having many parents with addiction problems or the need for additional social services in school."

Though health officials are going to do their best to estimate the value of those claims, "valuation is an art — not a science," D'Onfro said. She noted determining claim value is likely to be especially challenging in this case because health officials will be forced to ask questions like, "How much do I think New Jersey is going to have to spend in foster care because parents will be unable to take care for their kids?"

What happens if the bankruptcy is approved?

Under the proposed settlement, Purdue would continue to operate but with profits used to pay for the deal. Another option could be for a judge to order it to be sold. The tentative deal is set to go on trial in Cleveland on Oct. 21. If an agreement is reached, Purdue would likely not take part in the trial.

That trial and other trials will still take place because there are many other drug manufacturers and distributors that are defendants. Additionally, some states intend to continue litigation in other countries against the Sackler family.

Purdue employees 5,000 people worldwide. D'Onfro, the law professor, said there is no economic case that suggests Purdue would lay off workers at this time.

"In a case like this where there's no debt and there's no reason to think that part of this business is going to get liquited out to the creditors, it's hard to see why it has really any impact on the employees," she said.

However, she added, if there is "fat" in Perdue, "this is a good time for management to come in and start laying people off because the financial distress gives you a lot of cover."

Should we expect any decision to be subject to appeals?

"Yes, I would expect several appeals and probably several opinions from the Second Circuit Court of Appeals," D'Onfro said. "These kinds of large scale bankruptcies — getting everything worked out to everybody's satisfaction is very hard, so there are often several appeals up and down."