Why brunch can (and should) be the thing you do alone 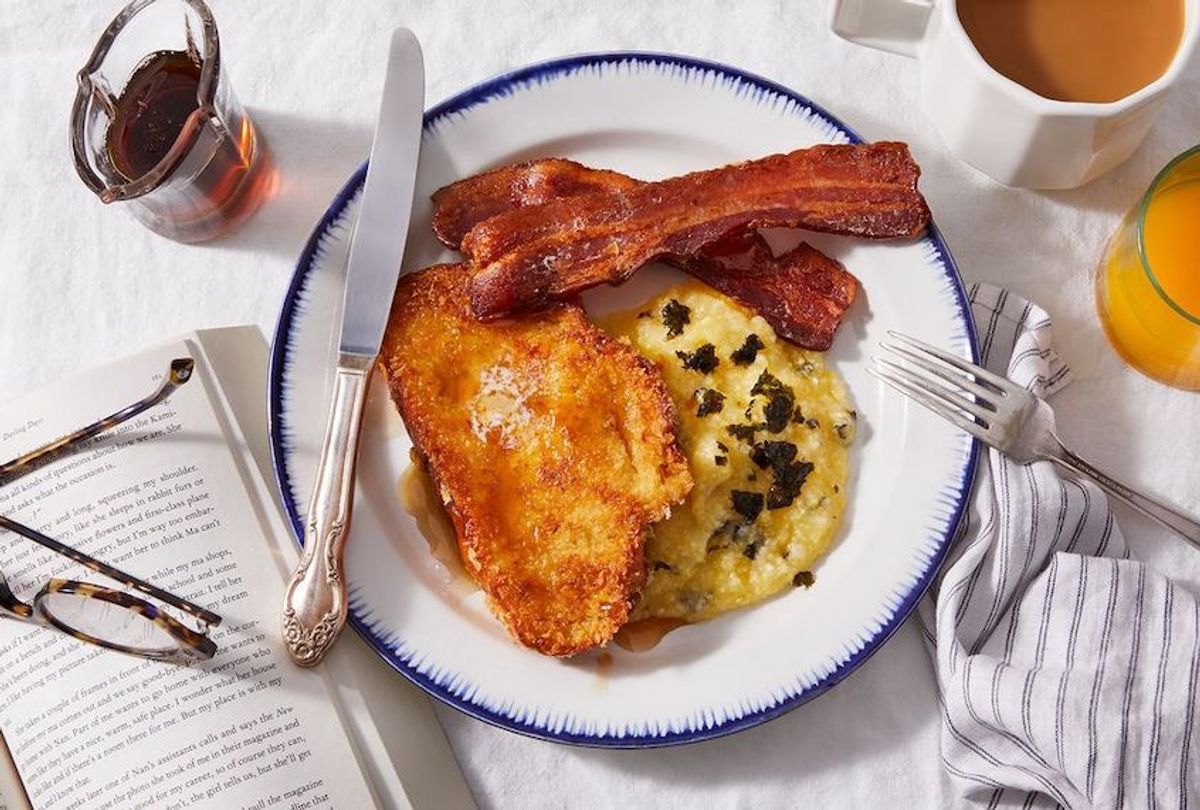 I have a proposition: Let’s cancel brunch. Or at least, what it’s become: waking up before noon on the weekend, followed by an hour-long wait for overpriced food and sugary cocktails at a crowded restaurant.

Who ever said this was a good idea?

There’s always that one friend who suggests it first. Let’s meet at 11 a.m. on a Sunday, 50 minutes outside of where we all live.

I’m always that friend who casually inches the meeting time closer to 2 to 3 p.m. Everyone agrees (for the most part).

The thing is, brunch was meant to be fun. Most sources concur that Guy Beringer coined the word first, in an 1895 Hunter’s Weekly essay titled “Brunch: A Plea,” as an antidote to having to wake up early for no reason. According to Beringer, the “world would be kinder and more charitable if” we all slept in on Sunday, skipping breakfast and opting instead for a late meal no sooner than noon.

Brunch is, he asserted, "cheerful, sociable, and inciting. It is talk-compelling. It puts you in a good temper; it makes you satisfied with yourself and your fellow-beings. It sweeps away the worries and cobwebs of the week.” Not only would such a meal allow for more revelry into Saturday evening, it would also omit the need for breakfast, which is, in Beringer’s words, “consoling, but not exhilarating.”

I’ve never been much of a breakfast person myself: I prefer a single six-minute eggmost mornings, if only to stave off the black coffee from burning a hole into my stomach, maybe a crunchy salad on the weekend (if I happen to wake up early enough).

But a late breakfast, early lunch? Blunch? I can get down with that.

This doesn’t solve the issue of going out for it, which is, I think, what makes brunch so terrible these days. The brunch menu at a restaurant is often the chef’s afterthought. As William Grimes reported for The New York Times, “Chefs hate brunch.”

According to celebrity chef Bobby Flay, “They hate cooking it and they hate thinking about it. Saturday night tends to be the busiest of the week, and they've probably gone out to have a few drinks afterwards. Suddenly it's Sunday morning and they have to come in and cook eggs.”

“Brunch is total garbage,” our test kitchen director Josh Cohen agrees. “There’s nothing more disappointing than going to a restaurant you’re excited about on a Sunday, only to realize they’ve switched out the menu for a selection of dumb eggs.”

“It’s rare that chefs put as much love into their brunch menu as they do their dinner menu,” food stylist and recipe developer Amelia Rampe tells me. “The servers are usually lower quality, too.” 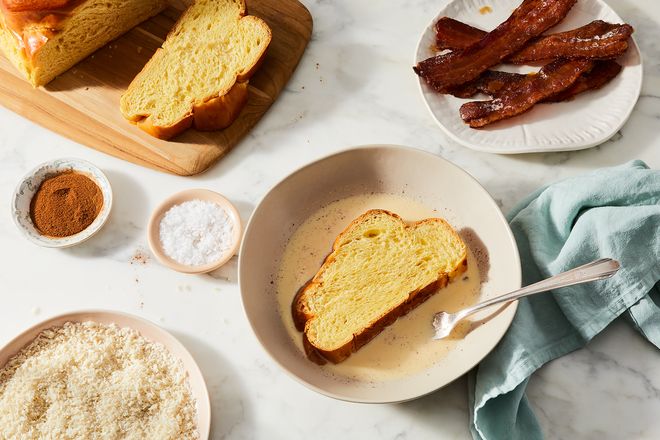 One way to solve this problem is to just cook your own brunch. For me, that’s the perfect medium: a way for me to enjoy the food — which is always varied and bountiful at brunch — without all the people, the commute, and most importantly, the cost.

"Brunch is just a reminder that I’m not rich or a model," food editor Jesse Szewczyk laments.⠀

On Sundays, anyway, I want nothing more than to sleep in as late as possible and, of course, to putter about my kitchen slowly and leisurely.

The keyword here is "leisurely": Eggs are for breakfast on the go. Brunch, on the other hand, is for the things you don’t have time to make Monday through Friday: French toast, grits, maple-candied bacon, etc.

There’s nothing more satisfying than composing a plate of your favorite foods, each part perfected exactly how you like — then taking it to bed to eat alone, curled up with a good book.

Directions
1. For the French toast, whisk together the egg, milk, cinnamon, vanilla, and salt in a shallow dish. Soak the bread slice in this custard, ensuring thorough soakage on both sides. Let this sit awhile as you prepare the bacon and grits.

2. Place the bacon on a foil-lined quarter sheet pan into a cold oven. Turn the heat on to 400°F and roast about 20 minutes. Take out of the oven, drizzle maple syrup over both slices, and place back into oven 5 more minutes to candy. (Watch carefully so it doesn’t burn.) Plate immediately, then set aside.

3. Meanwhile, in a small pot, bring the water and quick-cooking grits to a simmer (this will seem like too much water and too little grits, but trust me; the grits will swell up considerably, and all that water will make them nice and tender). Once brought to a simmer, cook 5 minutes, or until slightly thicker but still loose. Add butter, crumble in the roasted seaweed snack, season with salt and pepper, and stir. Keep covered until ready to eat. (Optional: Sometimes I add a dribble of sesame oil here to enhance the nutty flavor of the seaweed snack.)

4. Your bread slice should be thoroughly soaked now, even mushy. Place panko onto another plate or cutting board, then carefully add the bread to it, pressing gently to coat both sides with crumbs. You may have to flip a few times, but once generously covered, the toast should be sturdier and easier to handle.

5. To fry the French toast, heat a skillet over medium-low, then add the butter, allowing it to melt so you're left with a nice puddle in which the panko can properly fry. Add toast and cook until golden brown, about 3 to 4 minutes, then flip to cook the other side, 3 to 4 minutes again. Season with a final pinch of salt, if desired, and eat with maple syrup, bacon, and grits.