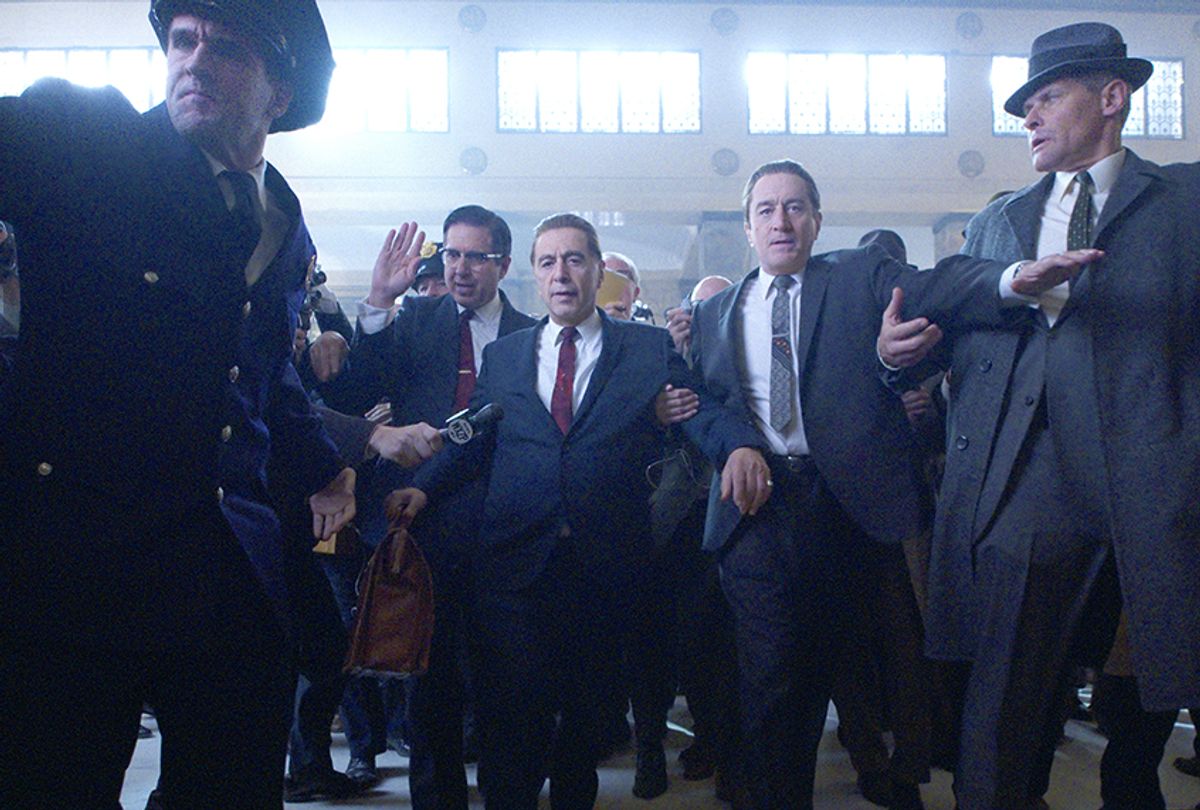 “The Irishman,” Martin Scorsese’s 209-minute gangster epic, is very, very good. It's also no “Goodfellas.” That is not a criticism; it is not trying to be that kind of mob movie. This adaptation of Charles Brandt’s book “I Heard You Paint Houses” is far more elegiac than bloody.

This is a slow burn film, with flashbacks within flashbacks recounted by Frank Sheeran (Robert De Niro), who is living out the tail-end of his life in a retirement home. Sheeran is a “house painter,” which is mafia slang for killer — as in, the blood he spatters in a shooting “paints” a house red. Frank gets into the business after meeting Russell Bufalino (Joe Pesci), a mob boss who hires him. Their relationship is cemented in part when Frank agrees to do a side job for a mobster named Whispers that leads back to Russ and his first hit. Scorsese leisurely films this sequence of Frank slowly casing the laundry service Whispers wants Frank to destroy, and it is a thing of beauty. The low-key approach to the crime culminates in a snap of violence; the focus here is more about respect and loyalty than action.

Whenever Frank and Russ talk, their words are freighted with (not so) hidden meanings. They never quite say what they are actually saying, but they both understand each other. The affinity between them is one of the strengths of this intimate film. And “The Irishman” is intimate. Yes, it can be enjoyed in a theater, but it will also play well on Netflix.

Scorsese certainly has style to burn here. His opening tracking shot is masterful — slowly moving into a close-up of Frank, after pausing briefly to admire his oversized ring, which he “earns” over the course of the film. Likewise, a bravura sequence late in the film, shot entirely without music, is a highlight. That said, the soundtrack of popular hits and Robbie Robertson’s score add dimension to the action. The period costumes, too, are sensational, and the much-discussed de-aging of the actors, while noticeable, is not overly distracting. The editing, by Scorsese stalwart Thelma Schoonmaker is unparalleled. (The film also sets many scenes in the venerable South Philadelphia gravy house, Villa Di Roma, but it is likely a name-only reference.)

The crux of the story develops when Jimmy Hoffa (Al Pacino) asks Frank, “I heard you paint houses.” “I also do carpentry,” Frank responds. Soon a friendship is born, and the film focuses on the bond Frank develops with Hoffa. “The Irishman” features several scenes of Frank and Hoffa sharing a hotel room — by not having Frank register, it is harder to prove he was there — and the scenes featuring these two old pros interacting (sometimes in their pajamas) are terrific. It is not just that Pacino and De Niro have chemistry together; their characters really play well off each other. Pacino is a brassy and foulmouthed Hoffa to De Niro's more reserved and calming Frank. These men puzzle out what to do about Hoffa’s rivals, Frank Fitzsimmons (Gary Basaraba) and Anthony (Tony “Pro”) Provenzano (Stephen Graham), and throughout the process, Frank and Hoffa are each sizing the other up in their own way, and viewers come to appreciate their relationship.

After Hoffa gets out of prison (where he has an altercation with fellow inmate Tony Pro), he enlists Frank’s help. A scene depicting a meeting between Hoffa and Tony Pro is wryly amusing as each insulted party wants an apology. Points are made about honor and respect, as well as the childish nature and fragile egos of these two men. Even if this episode probably goes on too long, it almost doesn’t matter; Scorsese and the actors seem to be having great fun, here, and viewers will too.

Much of “The Irishman” is enjoyable. The film never drags, even as its plot meanders, due to fabulous moments like Hoffa railing against the Kennedys, or a game of one-upmanship that includes Hoffa’s wife Jo (Welker White) afraid to start her car.

But Scorsese is not concerned with ratcheting up tension. The film is a memory piece. Frank is ruminating on his life, which includes estrangement from his adult daughter Peggy (Anna Paquin) after he commits a particular hit. This weighs on his conscience as the present day scenes (and De Niro’s internal performance) suggest, and they give “The Irishman” its gravitas.

The film may feel hollow at times because there is not much emotion on display. Moreover, parts can seem greater than the whole — the narrative digressions are diverting. But then Frank’s reflections cause a surge of emotion. His phone call to Jo after Hoffa goes missing is particularly moving. Likewise, an episode where Frank is honored at a dinner is a marvelous showcase: Frank asks Hoffa to present his award to him, and he does in a heartfelt moment, but then Hoffa mixes it up (verbally) with Russell and the tone of the scene changes, with Frank suddenly put in the position of acting as a go-between for the two people he is most loyal to — and ultimately only one can win out. However, Scorsese’s point very well may be that no one really wins here. “The Irishman” is painted less with victim’s blood and more with Frank’s regret. The film wistfully looks back on these men and their lives and deeds without celebration.

De Niro gives a very quiet, expressive performance as Frank. Pesci, returning to his first major role in nearly two decades, turns in a top-notch performance, playing Russ coolly and with just enough menace to show he means business. In contrast, Pacino is in “shouty Al” form here as Hoffa, but he is also absolutely pitch-perfect, stealing every scene and giving arguably the film’s best performance — he's a shoo-in for an Oscar nomination, if not the award itself. Pacino makes Hoffa likable and despicable at the same time, and he never comes across as histrionic even in his most outrageous moments.

In support, Anna Paquin is underused as Peggy, but the tension between father and daughter is palpable. Also noteworthy is Ray Romano's particularly impressive performance in the small role of Russell’s brother, a lawyer who helps Frank win a legal case early in the film. In addition, Bobby Cannavale and Harvey Keitel each have a few scenes playing gangsters. Their parts are key to the story, but ultimately minor.

“The Irishman” isn’t the last word on gangsters, but this long, involving, and extremely well-made epic seems to be an appropriate capstone for Scorsese — as well as De Niro, Pesci, and Pacino  — at this late stage in their careers.