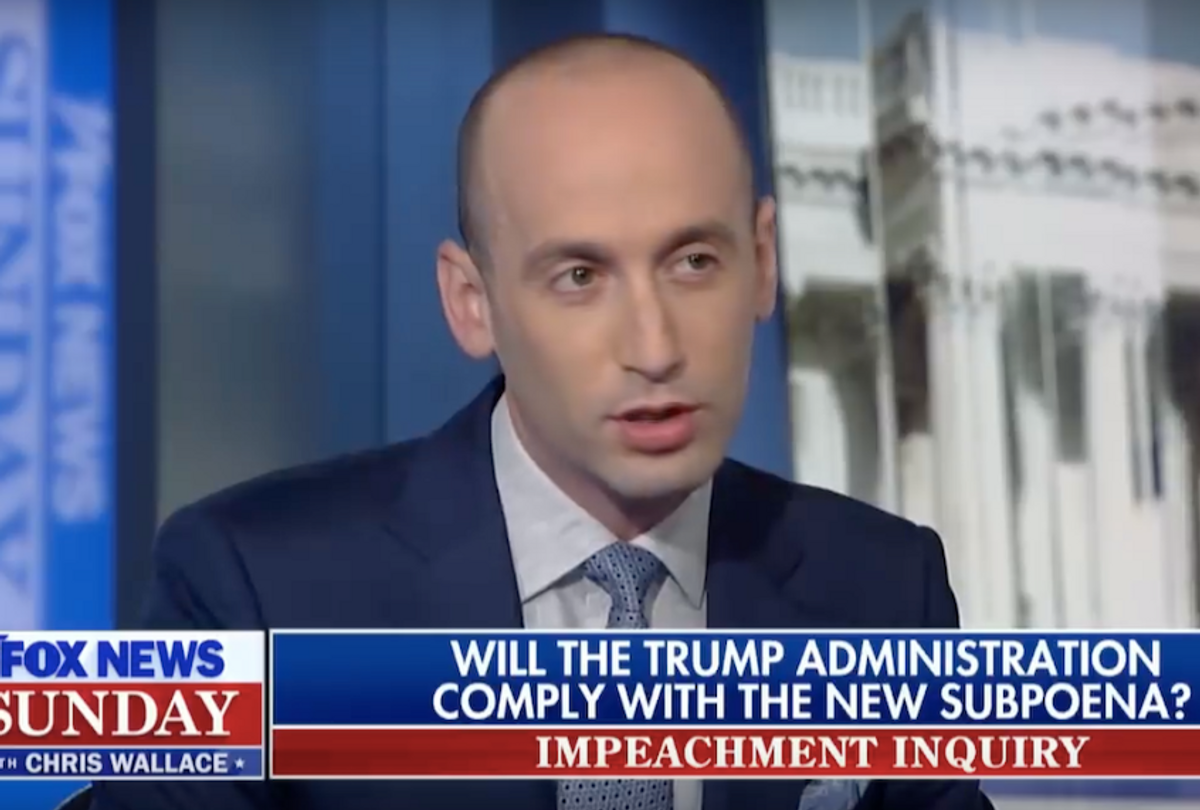 White House aid Stephen Miller went on "Fox News Sunday" with Chris Wallace and denounced the official whistleblower complaint filed against President Donald Trump and other administration officials as nothing but a "7-page Nancy Drew novel" written by a partisan "deep state operative" out to get the president.

While it was clear Miller was sent out to press the administration's case to a friendly, largely Republican audience on Fox, it did not go well once Wallace starting pressing him on key aspects of the case.

In his comments to Wallace, Miller said the whistleblower — yet to be publicly identified but who the New York Times reports is a CIA intelligence officer — does not deserve that "honorific," and argued "a partisan hit-job does not make you a whistleblower just because you go through the whistleblower protection act."

After Wallace pushed back, pointing out that even acting Director of National Intelligence Jospeh Maguire testified before Congress last week that the whistleblower appears to have acted in good faith and "followed the letter of the law" in using the proper whistleblower channels for agency officials, Miller went even further in his denunciations.

"If you read the seven-page Nancy Drew novel for the whistle-blower put together," Miller said, "it drips with condescension, righteous indignation and contempt for the president. It's also ludicrous on its face."

While a new poll out Sunday shows that nearly 2 in 3 Americans believe Trump's behavior regarding Ukraine is of "serious" concern, the president over the weekend continued to push "fabricated" stories about the situation, including the release of a new campaign ad Friday night which, as Common Dreams reported, is full of misleading and false statements.

Miller's characterization of the whistleblower on Sunday morning was immediately met with ridicule given the seriousness of the allegations found with the complaint(pdf) — a document that now sits at the center of an official impeachment inquiry launched by House Democrats last week.

Subsequently in the interview, when Wallace pressed Miller on why the president — who has at his disposal the State Department, the CIA, the Pentagon, and other agencies to collect information or pursue overseas corruption probes — instead used "three private attorneys" to ask Ukrainian officials to gather dirt on his political rival Joe Biden, Miller repeatedly dodged the direct question.

It didn't end there. Wallace continued to ask Miller to explain why President Trump — despite military aid for Ukraine being approved by Congress, the State Dept., and the Pentagon — ordered the money withheld, but again Miller deflected:

As the president has continued to claim that the "real scandal" is what Joe Biden and his son Hunter Biden did in Ukraine, Wallace asked Miller to directly explain what the alleged crimes were, but again Miller could not tie the thread:

Online, Miller was chastised for his inability to answer questions while Wallace received praised for the quality of his interview performance.

"This just keeps getting better," said one observer on Twitter. "Racist and neo-nazi #stephenmiller just got his shit handed to him by #ChrisWallace. All they can do is just throw out insane allegations and nonsense that makes absolutely no fuckin sense. Avoiding the questions. Pure corruption."

"Wow," said another. "Even Fox is starting to see the writing on the wall. This is something worth watching. Stephen Miller comes across as a complete eejit."