Impeachment and emotional whiplash: Can Americans rise up in hope and courage?

Fear is only natural: Trump has escaped before. But the tide is turning — and the hope you feel is important 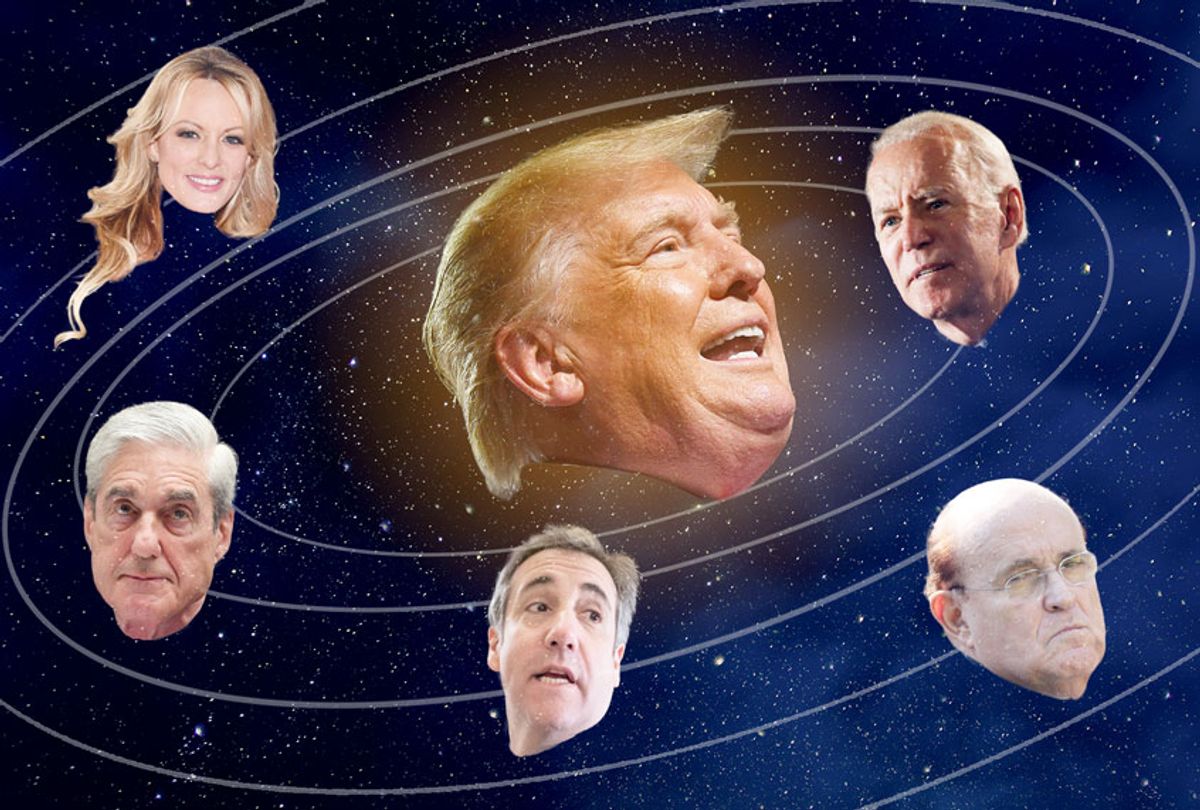 Novelist Jonathan Lethem told me in a recent interview that President Donald Trump is dreaming, and there's a whole industry committed to keeping him asleep. In the several months since Lethem offered that wisdom, I have kept on wondering what happens when Donald Trump is finally forced from his slumber?

We now know the answer.

Over the tumultuous last two weeks, it has become clear that a patriotic whistleblower had documented how Donald Trump abused his presidential power to extort and bribe Ukrainian President Volodymyr Zelensky to investigate 2020 Democratic presidential candidate Joe Biden for crimes the latter has not committed.

This is the second time that Donald Trump had colluded with a foreign country to interfere in an American presidential election on his behalf. The Trump administration’s own redacted summary of his phone conversation with Zelensky corroborates the whistleblower’s account. Trump and his representatives, in their bizarre efforts to manufacture a defense for their apparent crimes, have also verified the whistleblower’s account.

Last week, other high-level officials revealed that Trump told Russian diplomats and others during a 2017 private meeting that he was not concerned that Vladimir Putin’s agents subverted the 2016 presidential election on his behalf.

Trump’s efforts to collude with Ukraine against Joe Biden, the Democratic Party, Congress (which appropriates taxpayer money) and the American people is also a betrayal of America’s foreign policy: Aid and assistance were withheld for personal and political gain, in a way that benefited a hostile foreign power.

Given what is already known about Trump’s Ukraine scandal, and the highly inappropriate and unusual efforts to conceal the president’s communications with foreign leaders, this is a vast conspiracy that may involves dozens of people in the Trump White House.

In response to this newest “revelation” about Trump’s apparent and obvious corruption, general criminality and lack of respect for the rule of law and the United States Constitution, House Speaker Nancy Pelosi has finally decided to begin a formal impeachment inquiry against Trump.

Writing at the Atlantic, Adam Serwer offered this historical context for Pelosi’s decision in his essay “Why Republicans Aren't Turning on Trump”:

This is one reason that perceptions among Democrats shifted so fast. In a republic, the people are sovereign. The president used his authority to criminalize or suppress his political rivals, in violation of the people’s right to choose their leadership. His acts exemplify the scenario the Framers feared when they contemplated a corrupt president using executive power to keep himself in office, unaccountable to the people who elected him. Trump’s conduct here is not just impeachable; it is why the impeachment clause exists.

How has Donald Trump responded to the Democratic Party’s belated efforts to use the power granted to Congress by the Constitution to exercise “checks and balances” over his illegitimate regime?

Predictably, Trump is raging like an adult baby who in seven decades of life has never been told “no.”

During a private meeting last Thursday, Trump reportedly threatened the lives of the whistleblower and whoever provided that person information about the president’s conversation with Zelensky.

On Saturday, Trump launched (another) racist and anti-Semitic attack against the Democrats  he believes are “conspiring” against him in some sort of “coup d’état” or “uprising.” (Reps. Jerry Nadler and Adam Schiff, the chairs of important committees, are both Jewish. Reps. Alexandria Ocasio-Cortez, Rashida Tlaib, Ayanna Pressley and Ilhan Omar, persistent Trump critics on the Democratic left, are women of color.)

How are Donald Trump’s enablers, protectors and supporters reacting to what appears to be his inevitable impeachment by the House of Representatives?

Trump lies in the arms of Fox News and the broader right-wing echo chamber. Its hosts and guests are like fairies who play with Trump’s hair and stroke him to sleep.

But while the Mad King’s court is trying to lull Trump back to sleep,  there are hushed murmurs from the shadows. At some point, the instinct for self-preservation will kick in.

The ground has shifted fast, and as is usually true for any politician, most Republicans are ultimately concerned with self-preservation. Historically, they’ve been more afraid of the response of Trump’s base than of aligning with racism, oppression and corruption. But Trump has cause for concern, as cracks in the GOP’s previously united defense of Trump emerged throughout the week.

Trump’s public are possessed by steely loyalty. To decry or condemn Trump would be the same as to condemn themselves. Trump’s cultists will be loyal to the Great Leader until the end. They are the guardians of his sleep.

Collectively, Donald Trump, his advisers and other minions, rank-and-file supporters, the Republican Party, and Fox News and the right-wing media are like a mating ball of fascist authoritarian snakes.

What of other, better Americans? The age of Trump has been very difficult.

Trumpism has revealed that our country’s political traditions and institutions were not designed to confront the enemies within — in this case, a president and political party who have utter contempt for democracy and the rule of law.

American fascism and the enduring power of white supremacy, nativism and other social pathologies can no longer be denied. Most nonwhites already knew this to be true, as a matter of survival. But too many white Americans were still lying to themselves about the hypnotic power of white supremacy, and about how many of their fellow white citizens (and a small, pathetic number of nonwhites) would embrace racial authoritarianism and fascism if it were presented to them by the right messenger.

Many millions of Americans will protest “This is not who we are!” when confronted with another example of the Trump regime’s boundless and inexhaustible cruelty. They are stuck in infantile naiveté about the true character of their own country — and, by implication, the true character of many of its people.

Truth and empirical reality itself have been debased, twisted, and corrupted by the Trump movement and the global New Right.

Trump and his allies’ shock doctrine assault on American democracy and society has put the American people, with relatively few exceptions, in a state of learned helplessness.

Ironically, Trump’s overreach in the Ukraine scandal has begun to force at least some Americans out of their pitiable state of weakness.

As these "Good Americans" rise from their state of learned helplessness, they are experiencing hope and fear, exhilaration and worry, exhaustion and rejuvenation, highs and lows, smiles and cries. Because Donald Trump and his authoritarian movement have subjected the American people to so much abuse, there is great fear of disappointment — the reasonable worry that one can never really escape the abuser. Such an emotional dynamic holds true if the abuser is a parent or intimate partner — or, in this case, is president of the United States.

This is a condition of emotional whiplash.

It is natural for those in such an emotional state to fear being too hopeful. Disappointment is always so close, and so seemingly inevitable.

To escape learned helplessness, a person must go from a passive and reactive mindset to one of lived agency and action.

Yes, we must always acknowledge that hope is a dangerous thing. Yes, there is a looming sense of potential anticlimax: Donald Trump has repeatedly escaped any accountability for his vile behavior. Yes, the hope we feel may be temporarily beaten down by the reality that even if Donald Trump is impeached in the House of Representatives, his Republican minions in the Senate will acquit him promptly — or may never hold a trial leading to a formal vote on his guilt or innocence.

But despots, tyrants, authoritarians and demagogues such as Donald Trump are universally afraid of hope. They know that when a people embrace hope and then act upon it, their regime will be torn down. Whatever form it may take, authoritarianism is raw hegemonic power that is hyper-aware of its own vulnerability. Trump and his Republican Party  know this to be true. That is why they fear and hate "We the People" democracy.

To fully purge America of Trumpism (and all that caused it) will require a national reckoning. This will be painful. It will also be joyous. Hope is a necessary precondition for that resistance, that struggle, and the building of a new and better America after Donald Trump.