PFAS are “forever chemicals”: They take thousands of years to break down — and can remain in our bodies for decades 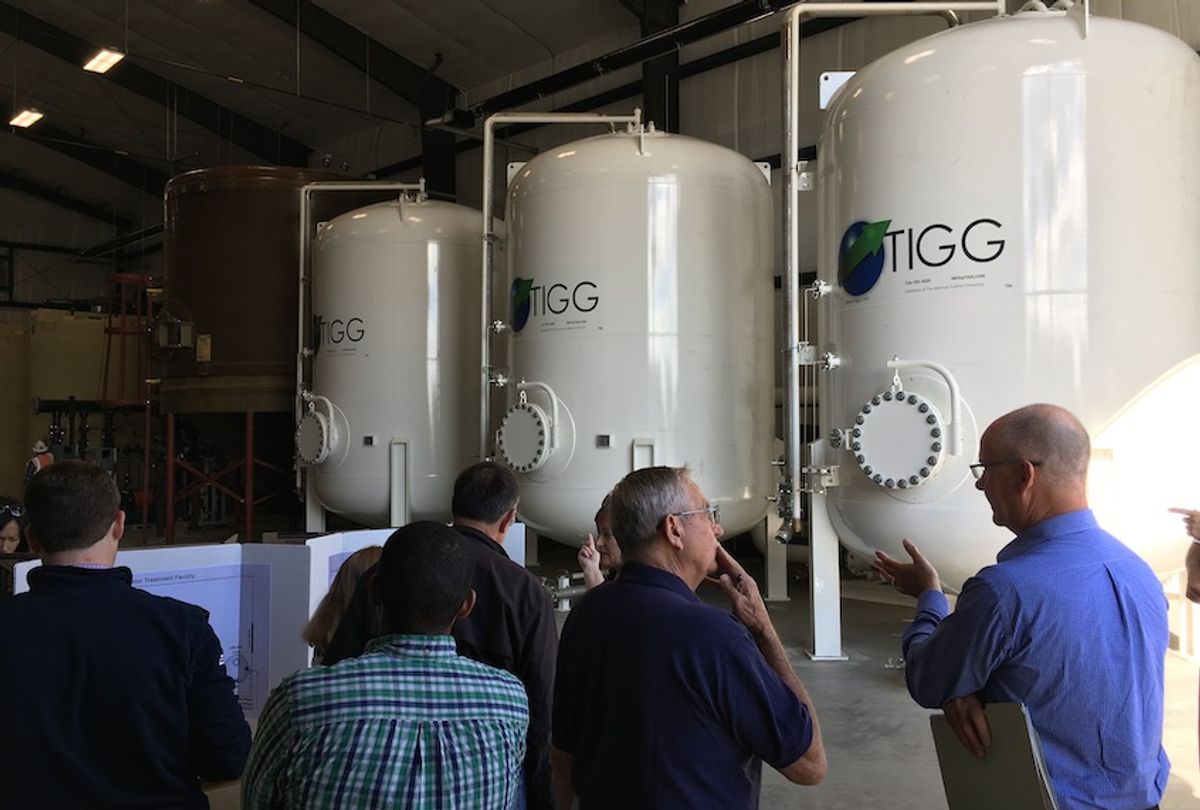 Cleaning up: On August 31, 2018, the Michigan Department of Environmental Quality (DEQ) announced that the United States Air Force has started up an additional granular activated carbon filtration system to capture historic per- and polyfluoroalkyl substances (PFAS) contamination caused by the use of firefighting foam at the former Wurtsmith Air Force Base near Oscoda. (Michigan Department of Environment, Great Lakes, and Energy)
--

This article first appeared on Truthout and was produced in partnership with Earth | Food | Life, a project of the Independent Media Institute. (delete copyright at the bottom)

A handful of multibillion-dollar chemical companies have waged war on our bodies and our environment for nearly 70 years without our knowledge or consent. Although the federal government — tasked with protecting the public and upholding the law — became aware of this chemical assault 20 years ago, it chose to conceal the truth, downplay the threat, and expand the use of a class of chemicals known to endanger the health of present and future generations.

PFAS are a class of nearly 5,000 synthetic chemicals that make products water- and grease-resistant. They are in non-stick cookware, water-repellent clothing, stain-resistant carpets, lubricants, firefighting foams, paints, cosmetics and paper plates our kids eat off at schools. Humans are exposed to PFAS through contaminated food, air, dust, rain, soil and drinking water.

Termed “forever chemicals,” PFAS can take thousands of years to break down in the environment and can remain in our bodies for decades. PFAS are now in the blood of 99 percent of Americans and have contaminated the drinking water of as many as 110 million Americans — particularly those living near chemical manufacturing facilities, airports and military bases. Even the smallest exposure to PFAS can cause a variety of cancers, thyroid disease, hormone disruption, decreased fertility and other serious health issues.

But there are signs of hope. Health-ravaged communities are fighting back against those that poisoned them — and winning. Schools and businesses are increasingly seeking out foodware, carpets, couches and other items that are PFAS-free. The Home Depot, the world’s largest home improvement retailer, just announced that it will phase out the sale of all carpets and rugs containing PFAS chemicals. More and more states are taking matters into their own hands, leading a national movement to combat exposure to PFAS.

"Dark Waters," an upcoming film starring Mark Ruffalo, Anne Hathaway and Tim Robbins, will tell the story of corporate lawyer Robert Bilott, who helped expose one of the most appalling environmental crimes in our nation’s history. And Congress is finally moving to action on behalf of the people they serve, not the corporations making them sick. Action to protect public health is being taken abroad as well, with Denmark recently becoming the first country to ban PFAS in food packaging. But much more must be done.

In the chemical industry’s secret war, communities are fighting back

In 1947, manufacturing company 3M developed perfluorooctanoic acid (PFOA) — a member of the PFAS family. DuPont purchased PFOA in 1951 to make Teflon, which quickly made its way into the kitchens of millions of American households.

In 1999, a West Virginia farmer whose cattle were suffering unexplained illnesses sued DuPont. The company was forced to release internal documents showing its PFOA-producing factory had contaminated the local water supply, and that it had hidden evidence showing that the chemical was hazardous to human health. Tens of thousands of local residents paid the price, including DuPont’s own workers, suffering elevated risks of cancer and greater incidences of low infant birth weights.

This landmark legal victory by one small farmer against a multibillion-dollar chemical company sparked a nationwide uprising of PFAS-poisoned communities filing and winning a series of class-action lawsuits against DuPont, 3M and Chemours (a spinoff of DuPont), resulting in billions of dollars in legal settlements. These courageous communities forced the release of damaging internal documentsshowing these companies had known since the 1970s their two most widely used PFAS — PFOA in Teflon and perfluorooctanesulfonic acid (PFOS) in Scotchgard — were linked to cancer, thyroid disease and other adverse health impacts.

In response, the Environmental Protection Agency (EPA) rightfully determined PFOS and PFOA were too great a risk to human health, and DuPont and 3M voluntarily phased them out. But instead of getting out of the PFAS business, these companies simply replaced them with slightly altered substitutions, renamed and rebranded as safe, yet equally persistent and no less hazardous.

For example, Chemours replaced PFOA with a new PFAS called GenX. Now, eastern North Carolina is reeling from GenX contamination in the Cape Fear River as a result of discharge from the manufacturing process that allows for the creation of Teflon and firefighting foam. Consequently, this recurring chemical onslaught continues unabated, increasing the number of unaware and unprepared communities being decimated by companies that will lie and kill for money.

It’s all about class: The key to reducing human exposure to PFAS

This game of chemical “whack-a-mole” must end. Thanks to weak laws and undue chemical industry influence, PFAS remain in an endless number of products and industrial applications, continue to spread across the globe, and pollute our drinking water, food, bodies and environment.

All PFAS are similar in structure and use and contain properties known to be toxic. To even begin to address this crisis, PFAS must be properly regulated as a “class” of chemicals and included on the EPA’s Toxics Release Inventory(TRI), just as what was done to Monsanto’s cancer-causing class of polychlorinated biphenyls chemicals.

Once on the TRI, one of the nation’s premier right-to-know initiatives, chemical manufacturers will have to report where, when and the amount of PFAS they are releasing into our air, water and soil annually. This would better inform unknowingly exposed communities, incentivize companies to reduce PFAS pollution, prioritize the elimination of the most hazardous PFAS and more effectively hold polluters accountable.

Yet, Trump’s EPA and Department of Defense (DoD) remain dependable PFAS defenders. The EPA has yet to set a safe, enforceable drinking water standard for PFAS, has colluded with the chemical industry to keep health risks secret, and has approved the use of more than 600 new PFAS chemicals in the last 10 years.

The DoD has long been aware that PFAS in firefighting foam endangers the health of soldiers, their families and surrounding communities. But again, the life of U.S. soldiers are not as valued as the chemicals that kill them.

As of August 2017, there are more than 400 known or suspected military sites contaminated with PFAS. A recent report found PFAS water contamination at 130 military bases across the country — nearly two-thirds had more than 100 times levels considered safe. Nonetheless, the DoD supports the continued use of PFAS despite the availability of safer alternatives, opposes spending the $2 billion in PFAS cleanup costs needed on and around military bases and has pressured the EPA to weaken cleanup standards.

The Trump administration recently attempted to suppress a major environmental health study that showed exposure limits for PFAS should be 7 to 10 times lower than current EPA safety standards. Last February, Trump’s EPA, a wholly owned subsidiary of the chemical industry, released its long-awaited “PFAS Action Plan” that actually makes it easier for the continued, secret and unregulated use of chemicals that threaten our future survival without fear of repercussion.

After decades of inaction, Congress has recently introduced more than 20 PFAS-related bills, as well as dozens of amendments to the House and Senate versions of the National Defense Authorization Act (NDAA) that would reduce PFAS pollution and help identify the extent of the crisis we face — including increasing the cleanup of PFAS waste using the Superfund program and requiring the EPA to set a science-based standard for PFAS in drinking water.

Notably, President Trump has threatened to veto the NDAA if it contains current amendments that would protect soldiers — and surrounding communities — impacted by the U.S. military’s use of PFAS-laden firefighting foam. Congress has until early October to submit an agreed-upon, merged bill to the president.

A clash on class: We must get this right

Despite Trump’s threatened veto, my organization, the Center for Environmental Health, applauds these historic and long overdue congressional actions. However, there are significantly different approaches being taken on the most important action of all.

The Senate has proposed an amendment to the NDAA that only adds 200 of the nearly 5,000 PFAS currently in existence to the Toxics Release Inventory. Such a limited scope will only open the door for companies like DuPont, Chemours and 3M to continue to perpetually spawn new PFAS chemicals, allowing this cycle of corporate profit at the expense of human life to continue, perhaps forever.

The better approach is a bipartisan, stand-alone bill proposed by Rep. Antonio Delgado of New York that includes all 5,000 PFAS on the TRI. Twenty-two state attorneys general support this approach, as they’ve seen firsthand the futility of eliminating one PFAS chemical, only to see another toxic copycat take its place.

Congress should reject the Senate’s feckless TRI amendment, support Representative Delgado’s bill, and support an NDAA bill only if it includes the PFAS amendments.

We face one of the most serious environmental health crises in our history. All communities deserve the right to know if toxic chemicals are being released into their air, water, food and soil. It’s time to embrace scientific reality as our guide to overcoming this challenge and start prioritizing peoples’ health over corporate.

What you can do to help avoid PFAS exposure

Find out if your tap water has been properly tested. If you are concerned, consider installing an in-home filter on your tap. Avoid “nonstick” or “waterproof” products and disposable foodware and carryout items (see the Center for Environmental Health’s database for safer options). Avoid microwave popcorn (and make your own instead). Don’t use beauty products with ingredients containing the term “fluoro.”

Tell your representatives to include PFAS as a class on the TRI today.

Michael Green is the chief executive officer of the Center for Environmental Health, which he founded in 1996. The Center works with parents, communities, businesses, workers, and government to protect children and families from toxic chemicals in homes, workplaces, schools and neighborhoods.