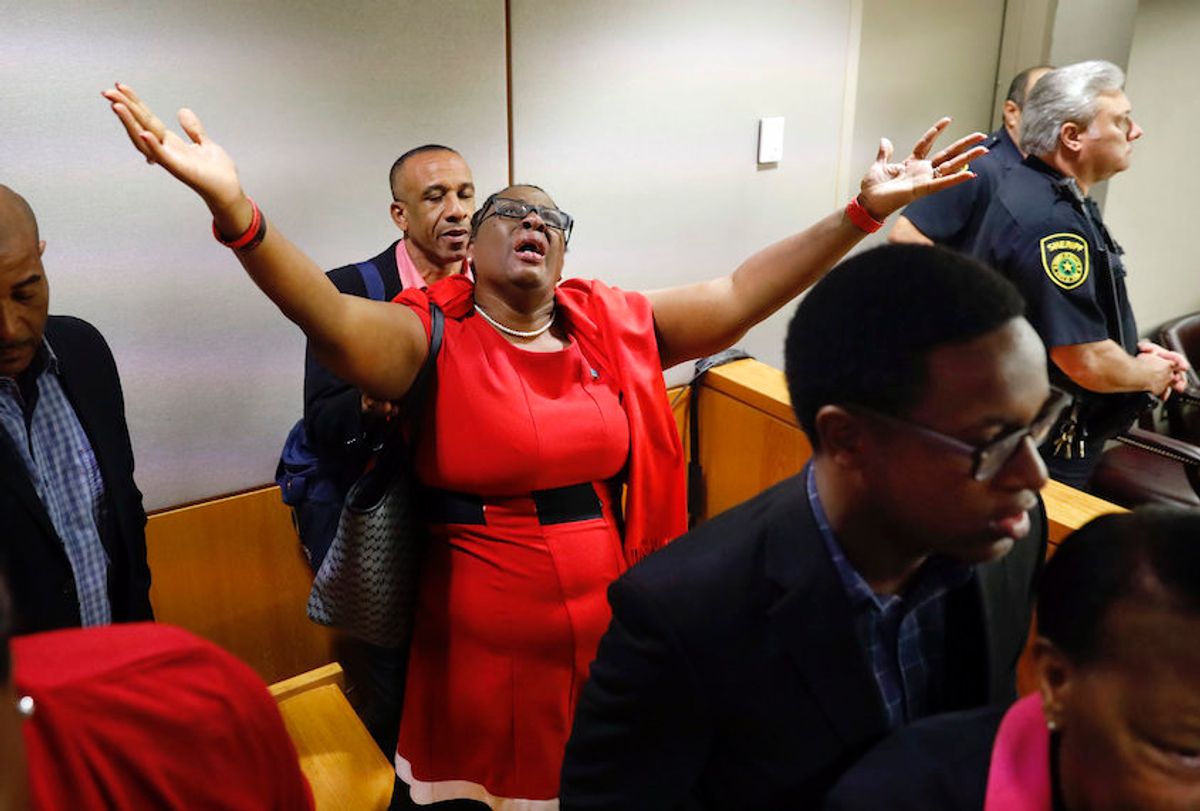 The guilty verdict shocked me, and not because I’m used to being let down by the juries, grand juries, prosecutors and judges presiding over cops' cases. It shocked me because Guyger had a weapon stronger than the law on her side; even more powerful than the gun she carried. Guyger was armed with white tears. And in America, white tears are a source of ultimate power.

White tears helped kill Emmett Till, the 14-year-old black boy accused of whistling at a white woman in Mississippi back in 1955. White tears almost allowed Susan Smith to get away with killing her own kids after claiming that an African American man was the culprit. And white tears could have ruined the life of an innocent black man in Quincy, Mass, when a white woman said she was assaulted by a black male in his early 20s and only after police reviewed surveillance footage admitted she had made it up. Guyger invoked that power of white tears in court: "I was scared he was going to kill me," she said to the jury. This time the outcome was justice.

Guyger, 31, lived in the same apartment complex as Jean. On September 6, 2018, she entered Jean's apartment, which is on a different floor from hers. She says she thought she was in her apartment. There she saw Jean eating ice cream, and she says she thought he was an intruder, so she shot him. Jean died from his injuries in a nearby hospital. Three days later, Guyger was arrested by Texas Rangers who took over the investigation.

Guyger was initially charged with manslaughter and terminated from the police force. After a series of protests, public outrage, and a sorry attempt by the Dallas police department to smear Jean’s reputation as a Christian man, Guyger was charged with murder by a Dallas grand jury.

The disgraced Guyger faced a multiracial and multiethnic jury during her week-long trial that ended Tuesday in that shocking verdict. Even though it seems like it would have been an open-and-shut case, African Americans know better. We have seen how often cops continue to enjoy freedom after killing black people, even when the victims posed no threat, had no weapons, and the incidents were even caught on tape. Freddie Gray, Eric Garner and Michael Brown — just to name a few — had no firearms on them. They should be alive today and are not. All of their killers walked.

How does this happen? Cops who kill too often earn a get-out-of-jail-free card when they say “I feared for my life and the lives of my fellow officers.” And Guyger tried it as well, claiming she was afraid Jean was going to kill her — even though by her logic he would have been more justified in shooting, because she had intruded into his apartment.

Guyger got the verdict she deserves, but I'd hold off on celebrating this turn of justice until she's sentenced. Her conviction carries a sentence from five to 99 years, and she could easily receive a lesser penalty and be home soon. And even if she is made to serve decades in prison, an innocent man is dead. What will Dallas do to prevent another Amber Guyger incident?

Police officers have enormous powers — to take someone's freedom, to take their lives even. Those powers were granted to Guyger, who then made a colossal, life-ending error in judgment while wielding those powers, with no checks in place to prevent those powers from killing a man. According to Guyger, she was too tired to recognize her own home that night. And yet she had enough cognitive control to fire deadly shots at a living being. Jean had no weapon and, once again, was in his own home; and yet Guyger felt shooting him was her only option. That's a serious issue — of training, of recruitment, of assessment — that goes deeper than one man's killing, and needs to be aggressively handled by the Dallas Police Department.