"Both sides" fever strikes again: Why does New York Times insist on doing favors for Trump?

Oops, they did it again: New York Times nourishes another Trump conspiracy theory that has no basis in fact 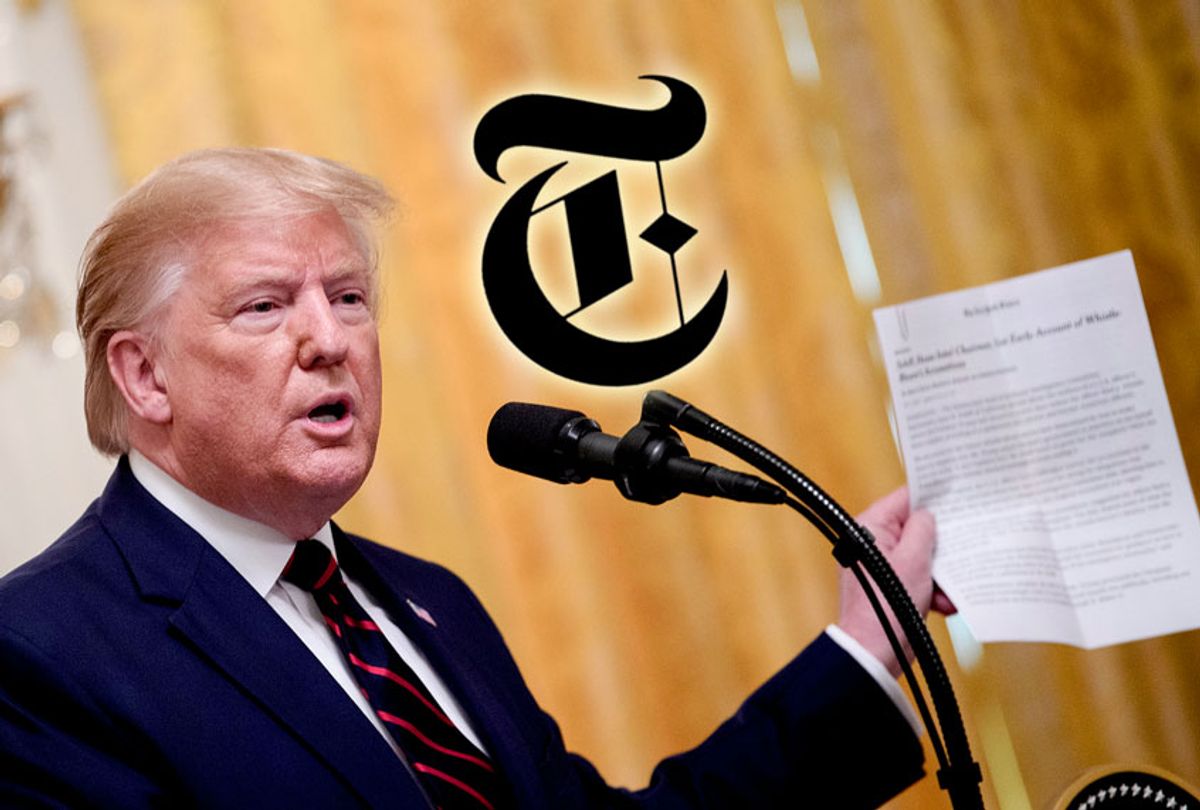 US President Donald Trump speaks during a joint press conference with Finnish President Sauli Niinisto (not shown) in the East Room of the White House in Washington, DC, on October 2, 2019. (BRENDAN SMIALOWSKI/AFP via Getty Images)
--

The New York Times has yet again taken a story that should, objectively speaking, be damaging to Donald Trump and found a way to put some spin on the ball so it looks like a problem for the Democrats. This time, it came in the form of a breathless headline designed to make House Intelligence Committee chair Adam Schiff, D-Calif., a man whose sense of moral rectitude would put Captain America to shame, look look like a scofflaw.

This headline gives life to accusations coming from the notoriously dishonest Trump, who is spinning a wild story about Schiff plotting "a scam" with the whistleblower to bring down his presidency.

But if one reads past the headline to absorb the actual article — written by reporters who have been covering the Ukraine scandal from a national security perspective — they will soon realize that the actual story debunks Trump's claims, and that neither Schiff nor the whistleblower did anything wrong.

"The C.I.A. officer approached a House Intelligence Committee aide with his concerns about Mr. Trump only after he had had a colleague first convey them to the C.I.A.’s top lawyer," the article explains. "Concerned about how that initial avenue for airing his allegations through the C.I.A. was unfolding, the officer then approached the House aide."

This story should, by any normal human standard, be more evidence of Trump's corruption and likely criminality. For one thing, the whistleblower went to the House aides because he had reasonable concerns that Trump would try to cover up his possible crimes, a concern the whistleblower also outlined in his complaint. That's exactly what the Trump White House tried to do, which suggests the whistleblower's concerns were justified.

Second, as the article makes clear, Trump is trying to use false claims that Schiff did something wrong in the same way he uses so many other false accusations, as a way to muddy the waters with a "both sides are equally corrupt" narrative that the facts simply do not support.

It was entirely predictable that Trump would run with this misleading headline, as if it vindicated him, while ignoring the substance of the underlying story.

The point of journalism, at least in theory, is to shed light on the truth. With, this headline, the Times gave Trump more fuel for his engine of lies. Which is the exact opposite of our profession's supposed goal.

"This is framed so as to sound sinister and conspiratorial, the better to win traffic from Trumpists looking to prove the president is the target of the deep state, but it’s actually a story about how everyone involved followed proper procedure," Adam Serwer of the Atlantic pointed out on Twitter.

If this was a one-off situation with the Times, it would be easy to shrug off as a mistake. But it's only the latest in a series of choices that are clearly compelled by a desire, by some in management at the paper of record, to find ways to "balance" the stories of off-the-charts corruption coming out of Trump World, either by minimizing Trump's awfulness or elevating Republican smears to give them a semblance of mainstream credibility.

Anger about this goes back to the Times' editorial decision, during the 2016 campaign, to treat substance-free "scandals" about Hillary Clinton — often fed directly by conservative operatives — as major stories, while giving the real and serious stories of Trump's long history of fraud and corruption relatively light coverage. Rather than learn a lesson about valuing truth over "balance," the Times has continued to handicap its Trump coverage, at least in headlines: It has blamed Democrats for a government shutdown literally caused by Republicans, and portrayed Trump as a spokesman for anti-racism shortly after a terrorist shooting inspired by his hateful rhetoric.

Why does this keep happening? There's no great mystery. Times leadership is touchy about conservative accusations that they're running a "liberal" paper, and will do everything possible to discourage that narrative.

“What I’m saying is that our readers and some of our staff cheer us when we take on Donald Trump, but they jeer at us when we take on Joe Biden,” executive editor Dean Baquet said during a recent staff meeting, according to a recording obtained by Slate.

“There are a number of people who believe the media’s job is to be the opposition party, and that is just not our job," said White House reporter Maggie Haberman, who is frequently accused of fluffing Trump whenever possible, said in her own defense last October.

Of course, that's the problem: Trump is so terrible that simply reporting the facts about what he says and does can make someone sound like a stalwart member of the Resistance. So to create an artificial appearance of balance, the Times thumb is forever on the Trump side of the scales.

Never was this more evident than in early reporting on the Ukraine scandal that has finally led to an impeachment inquiry. As the whistleblower's revelations detail, Trump and his lawyer, Rudy Giuliani, have tried to build out a conspiracy theory involving Hunter Biden, the ne'er-do-well son of former Vice President Joe Biden, and the Ukranian government. They've hoped to seed claims — which appear to be entirely false — that Biden interceded in Ukrainian politics to benefit his son, who then sat on the board of a Ukrainian energy company, by planting stories about "questions" regarding the father and son's interactions with Ukrainian leaders.

Trump and Giuliani found their mark in the New York Times, leveraging that paper's hunger for Democratic scandals, no matter how unsubstantiated, to balance out all the coverage of very real Trump scandals. In May, the paper ran a story, using the "questions" framing, that advanced Trump's conspiracy theory about the Bidens. (To be clear, Hunter Biden has had a checkered career and personal life, and trades on his name for cash. But the timeline shows his father was not involved in any attempt to protect his activities in Ukraine.) Reporter Ken Vogel didn't even notice the real story: Trump was likely committing crimes in his eagerness to push this conspiracy theory into the mainstream media.

"The reporter, Ken Vogel, was too wrapped up in trying to nail the story he set out to cover to notice that the actions of his sources, rather than the information they were promoting, was the real story," Jonathan Chait observed in the wake of the whistleblower story.

Being so preoccupied with finding thin-gruel "scandals" to pin on Democrats that you miss the president committing another impeachable offense is ... something. It's not a sign that robust, truth-oriented journalism is going on.

The good news is that this attempt to smear Schiff is weak even by Trump's standards, especially in the light of an actual impeachment inquiry that has taken much of the wind out of the "both sides do it" narrative so beloved by the New York Times. But this offers yet more evidence that the Times, despite its fine roster of reporters, is so committed to carrying Trump's water in the name of "balance," that they're undermining their fundamental journalistic mission.

This may be an unpleasant truth for Beltway journalists to hear, but it is a truth nonetheless: Maybe it would make your jobs easier if "both sides" were even close to equally bad, but the fact of the matter is, they're not. You owe it to your readers to be honest about that. Isn't facing up to the truth, whether it conforms to your own desires and beliefs or not, supposed to be the job?