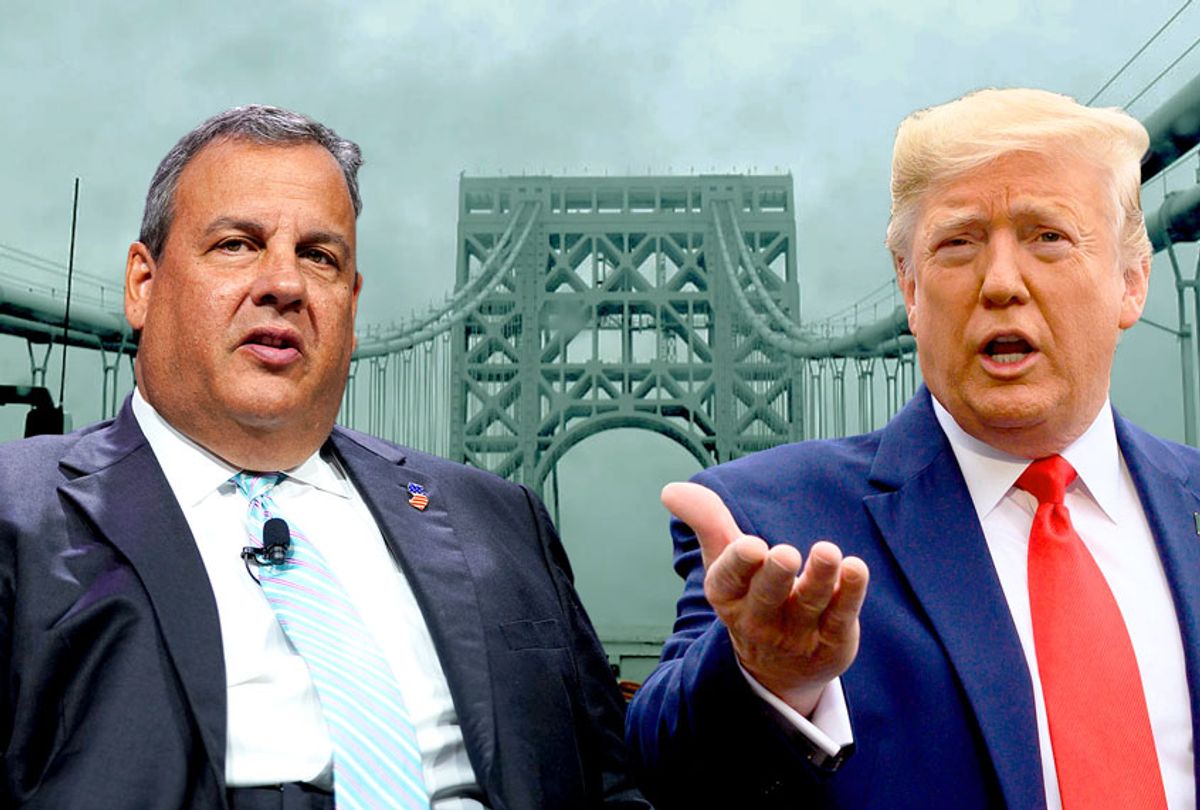 Our country is in the throes of a governing crisis unlike any in our history and the rule of law is at stake.

A narcissistic racist despot is President of the United States and has enlisted the upper echelons of the executive branch into an ongoing criminal enterprise which has as its goal his re-election and destruction of his political enemies.

It remains an open question whether or not the theoretically two co-equal branches of the federal government are up to the task of holding Donald Trump and his posse of rogues, accountable for their international crime wave.

If it goes the way of Bridgegate, Mr. Trump and his avenging minions have absolutely nothing to worry about.

In Donald Trump and Chris Christie, we have two men who have cashed in on the affinity that so many Americans have for their brand of smash mouth bully politics. This sort of brute force personality draws the source of its power from a cult of personality that provides followers with the sense of agency that’s lacking in their own lives.

In a nation poised to move from being dominated by a white male patriarchy that asserts its dominion with such phrases as “because I said so” this cohort of the body politic is having trouble adjusting to power sharing with the rest of humanity.

It is worth noting that at a key point in Donald Trump’s race for the nomination, it was Gov. Christie’s endorsement that tossed the Republican contender a lifeline of political legitimacy.

The silhouette of this current crisis should be familiar to the residents of New Jersey who were around for Gov. Chris Christie’s Bridgegate gambit when his minions subverted the Port Authority and some number of that bi-state agency’s police force to tie up traffic at the George Washington Bridge for a four day period which included the anniversary of the Sept. 11 attack.

In that quid pro quo floated in the call between the Ukrainian president and Mr. Trump there was that crass Machiavellian transactional self-dealing quality that’s reminiscent of the way Gov. Christie ran his governorship.

Just as Trump has corruptly enlisted officials at the DOJ and the Department of State, the Christie team subjugated the Port Authority of New York and New Jersey, which by virtue of the 1921 Congressionally approved compact that created it, became a sovereign entity.

The fact that the Department of Justice prosecution of the Bridgegate caper ignored the reality that the bi-state agency’s armed police force was enlisted to execute  a political payback scheme using the GWB,  one of the nation’s top potential terrorist targets,  on the very anniversary of the 9/11 terrorist attack when it could have been attacked, tells you all you need to know.

Former U.S. Attorney Paul Fishman brought a case that kept the political power structure intact that was presided over by heavy hitters Governors Christie and Andrew Cuomo who are ultimately responsible for how the bistate duchy is run.

So, no Port Authority police officers were prosecuted, even though they offered a false cover story and actually helped execute the lane closures. And then-Port Authority Executive Director Pat Foye, who admitted under oath to issuing a false press release advancing the false GWB traffic study cover story, went on to be promoted by Mr. Cuomo to be Chairman of the Metropolitan Transportation Authority.

In the case of the Christie Bridgegate posse that captured the Port Authority, the weight of the sprawling criminal enterprise would fall on a single mother of four and two male co-conspirators, while the much larger ring of “unindicted co-conspirators”  avoided jail, were not even called to testify, and went on to prosper.

Former U.S. Attorney Paul Fishman’s prosecution of the case was like a precision drone missile that surgically hit just a handful of bad actors but left wholly intact the bi-partisan and bi-state agency that’s been a law unto itself for as long as anybody alive can remember.

Consider just how gently the legal system treated former Port Authority Chair and former New Jersey Attorney General David Samson who presided over the agency during the entire sordid affair. Why even his law partners had sufficient time to remove his name from their marquee before things got really messy.

Mr. Samson avoided breaking a sweat over Bridgegate.  Represented by former Department of Homeland Security Secretary Michael Chertoff, he pled guilty to shaking down United Airlines CEO Jeff Smisek and was given home confinement for his transgression that cost the airline millions in fines.

Meanwhile, down on earth Bridget Anne Kelly and Bill Baroni were both sentenced to eighteen months in federal prison and have an appeal pending before the U.S. Supreme Court. David Wildstein, the plot’s mastermind and the prosecution’s star witness got probation.

“When all was said and done with former U.S. Attorney Paul Fishman’s prosecution of the Bridgegate case, the public was left with more questions than answers about the conduct of not just public employees but law enforcement officers as well,” he wrote.

Kelly continued, “A list of  ‘un-indicted conspirators’ that was assembled by the Department of Justice as part of the prosecution was never publicly released. Then Fishman fought such a release in court and one of the conspirators who had not been indicted sued to block a Federal judge from releasing the list to the news media, who had gone to court to make the names public.”

Mr. Stepien, Mr. Christie’s top political advisor was enmeshed in the tick tock of the events that make up the Bridgegate scandal but through his lawyers steadfastly maintained his innocence.

Yet,  at one point he invoked the fifth amendment when the state legislature sought to get documents from him. From his perch at the Office of Intergovernmental Affairs, funded by taxpayers, he used the trappings of the Governorship to reward partisans and punish enemies instructing his colleagues to use private email so as to cover their tracks.

As WNYC reported, while Mr. Stepien has never had to tell his side of the story on the record, his name came up “almost every day, 351 times in all” at the criminal trial of his former girlfriend Ms. Kelly.

Many central players in the scheme, including Mr. Christie, were never called to testify at the federal criminal trial.

And so, that Jersey ‘I am the law’ despotic culture, cultivated by Mr. Christie during his Trenton tenure, lives on in the White House West Wing and on the Trump 2020 campaign where  Mr. Stepien is a top Trump political advisor.