How the U.S. could afford "Medicare for all"

Several Democrats running for president in 2020 support some version of Medicare for all. 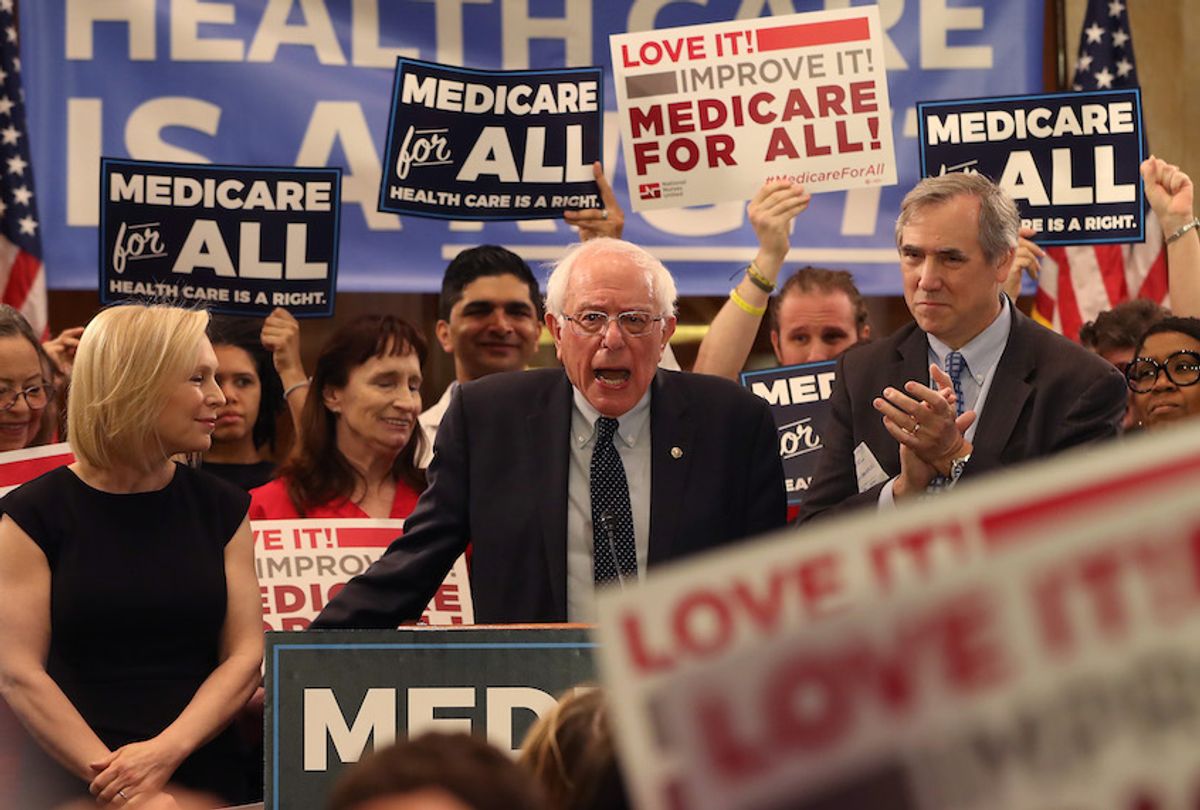 Health care is Americans’ number-one priority, based on recent polls, so it’s no wonder it’s been a hot topic in the Democratic primary.

Every candidate is offering a plan, ranging from Joe Biden’s Affordable Care Act upgrade to Bernie Sanders’ “Medicare for all” that would abolish private health insurance. Even the president is joining the bandwagon and unveiled his own Medicare plan.

On the high end, a full-scale single-payer heath care system would come at a steep price: I estimate about US$40 trillion over 10 years.

There is, however, a simpler and less costly path toward single-payer, and it may have a better chance of success: simply strike the words “who are age 65 or over” from the 1965 amendments to the Social Security Act that created Medicare, which would mean virtually everyone would be covered by the existing Medicare program.

I have been researching health care for over four decades. While this idea wouldn’t be single-payer — in which the government covers all health care costs — and private insurers would continue to operate alongside Medicare, I believe it would be a substantial improvement over the current system. And it might even be politically possible.

Medicare and what it was meant to be

Striking the words “over 65” from the Medicare statutes was an idea championed by the late Sen. Daniel Patrick Moynihan.

Moynihan, who held several roles in the Kennedy and Johnson administrations, was an original architect of the War on Poverty and a central figure in the evolution of health care policy in the latter half of the 20th century.

Many original Medicare advocates intended it to be the basis for universal health insurance. A key reason it serves so well as the foundation is that it includes a funding mechanism — the 2.9% Medicare payroll tax paid by you and your employer, alongside modest monthly premiums.

For example, Medicare covers hospitalization only after a person has paid the $1,364 deductible, and there’s a copay of $341 per day after 60 days and double that beyond 90. It also covers only 80% of the cost of doctor visits and the use of medical equipment — though only after a $185 deductible and the monthly $136 premium.

Still, it provides meaningful protection against the potentially crippling cost of accident or illness.

Giving Medicare to everyone

This is the way health insurance is provided in the United Kingdom and Canada. Sanders’ plan would follow this framework, even extending it to cover long-term care.

A simple expansion of Medicare would be more like a hybrid system in which the government program exists alongside private insurers, with residents free to use any combination of the two.

One of the reasons single-payer health care has failed in the United States is that even though it might eventually lower costs, it would require substantial new taxes up front. Sanders’ plan, as I noted earlier, would cost around $4 trillion a year. But because of its lower benefit levels and built-in revenue stream, a simple Medicare expansion would cost substantially less, maybe only half that.

In 2018, the last year with complete data, nearly 60 million Americans received Medicare benefits — including most elderly Americans and 9 million who were disabled. Total spending was over $700 billion that year, or an average of $11,800 per recipient.

A simple expansion would add the nondisabled population under age 65 to Medicare: 28 million without insurance, 66 million covered by Medicaid or the Children’s Health Insurance Plan and 176 million with private insurance. For the purposes of my calculations, which I last conducted earlier this year, I assume everyone eligible for Medicare would take advantage of the program.

Because the vast majority of the new enrollees would be younger and healthier than current Medicare participants, the cost per person would be much less, or about $5,527 for the once uninsured and $3,593 for everyone else. With a few other calculations, the total annual price tag of an expansion would tally around $836 billion.

Something that often gets lost in the debate over the cost of single-payer is that its implementation would lead to a host of savings that make the bill to taxpayers a lot less than the sticker price.

I estimate that a full single-payer system would likely save about 20% of current spending, or nearly $700 billion in 2019. A simple Medicare expansion — the kind I’m suggesting here — wouldn’t save quite as much, but it’d still be significant.

So where would the savings come from?

To begin with, studies show that medical billing is more expensive in the U.S. than in many countries.

The U.S. health care system spends twice as much as Canada, for example, because more “payers” means more complexity. Savings from a simple Medicare expansion could reduce this waste by about $89 billion a year.

Another source of savings is on insurance administration. Private insurers spend more than 20% of total expenditures on overhead, compared with around 2% for traditional Medicare. Savings from moving everyone to Medicare would approach around $200 billion because of economies of scale, lower managerial salaries and more meager marketing expenses.

A third way a simple Medicare expansion would yield savings is by reducing the ability of hospital networks with market power to overcharge private insurers. By using its market power to negotiate lower prices, Medicare pays prices barely half as high and is able to pay 22% less for the same services as do private health insurers. If we all paid Medicare prices, we would save nearly $400 billion on hospital overcharging.

Making conservative estimates, and assuming that the expanded Medicare would only cover services it already does, these three areas then would save $220 billion, bringing the cost down to $618 billion.

While $618 billion still seems like a hefty price tag, taxes wouldn’t have to be raised much to pay for it.

For starters, most everyone would pay the premiums already charged by Medicare. This would generate an additional $210 billion in revenue.

In addition, a Medicare expansion would reduce the need for two current insurance subsidies: one for employer-provided insurance plans and another that the ACA provides insurers. This would save about $161 billion.

This leaves about $246 billion that would still need to be raised through additional taxes. This could be done with an increase in the Medicare tax that gets deducted from your paycheck. The tax, which is split evenly between employee and employer, would need to rise to 5.9% from 2.9% today. This would amount to just under $15 a week for the typical employee.

Campaigns for universal health insurance coverage have failed in the United States when they run up against the cost of providing coverage. Medicare, America’s greatest success in advancing health care, succeeded precisely because it was limited and had its own dedicated funding streams.

We might learn from this example. Rather than jump all the way to a comprehensive single-payer system like the one Sanders favors, we could take a step along the way at a fraction of the cost by simply expanding Medicare to everyone who wants it.