Inspired by the Marcella Hazan recipe that once won me a cooking contest. 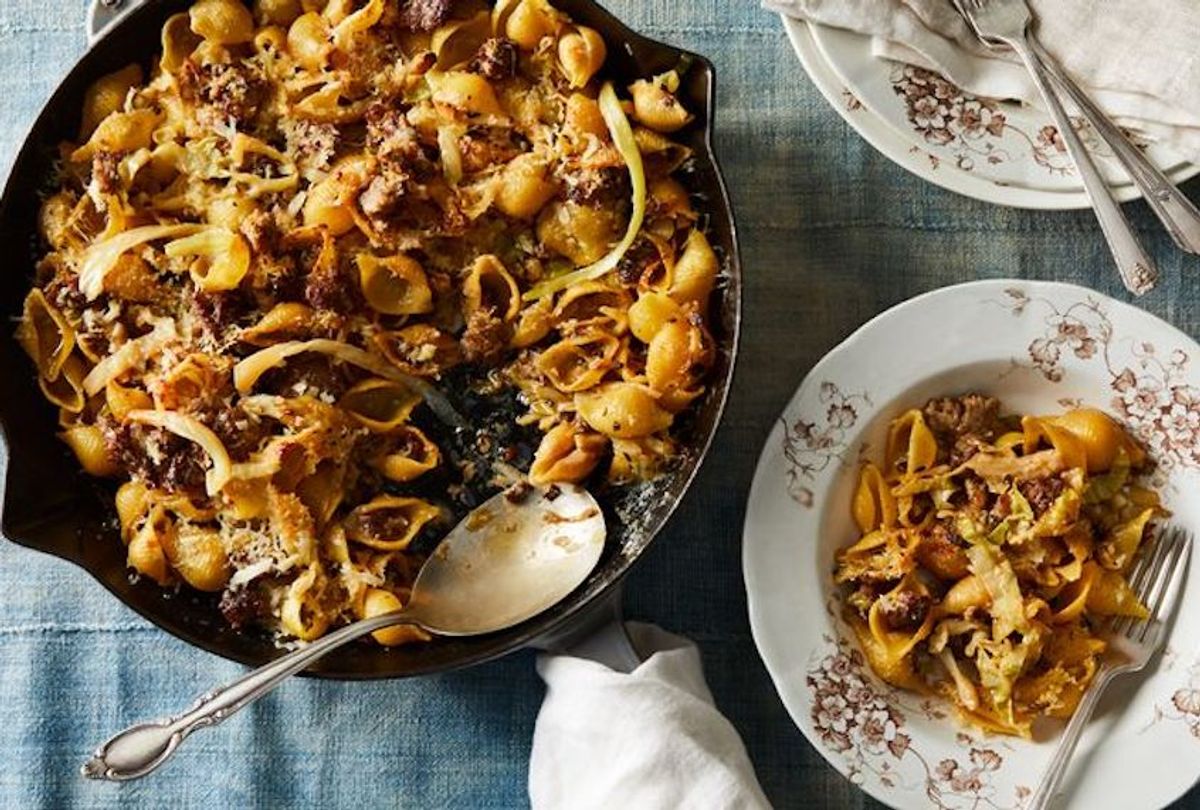 Sure, I was only competing against one other chef, and, okay, okay, both "judges" were my best friends, but it's still a crowning achievement in my dinner party career.

If only he'd known he couldn't have stood a chance—I had Marcella Hazan in my corner. In particular, her recipe for tegame di verza e maiale al forno, or baked layered savoy cabbage and pork. It's a dish my mom would make on special occasions (the ones that called for homemade béchamel) when I was growing up, and fighting with my sisters over the corner slices armed me with some of my most important life skills.

"Think of this dish as a sort of lasagne," Hazan writes in the headnote. "Parboiled and flattened savoy cabbage leaves replace the pasta, and sautéed ground pork takes the place of the meat sauce."

The night of the face-off, my ambitious rival paused, mid–final Parmesan sprinkle, to poke at a cabbage leaf in my baking pan.

"Think of this dish as a sort of lasagne," I said, and placed it under the broiler to finish.

In the years that've passed since my victory, it's no surprise that I've combined pork, cabbage, and creamy sauces of varying types in more ways than one might think reasonably practicable.

That — plus a leftover half-head of green cabbage — is how I ended up with a skillet pasta that I can't stop making in the colder months.

It calls on sweet Italian sausages, uncased and deeply browned, and cabbage cooked allll the way down until tender and caramelized. Like the creamy sauce in Hazan's tegame al forno, this one has a pinch of nutmeg, but you should consider it more of a cheater's béchamel: There's no careful thickening, just starchy pasta water, heavy cream, and melted Parm. Al dente conchiglie (shells!) get tossed in, before the whole thing hits the broiler for browning on top. (After some earlier iterations of this dish, I learned that Hazan has another, similar savoy cabbage and pork sausage stovetop pasta recipe, in which she advocates for a noodle shape with ridges or crevices for the best possible sauce coating.)

The result is somewhere between the Hazan lasagne I'll never stop talking about, a stovetop mac and cheese, and baked pasta. Think of it as a sort of hybrid—and don't forget to serve it with extra Parm.

Ingredients
2 tablespoons olive oil, plus more as needed
1 pound sweet Italian sausage (about 4 to 6 sausages depending on size), uncased
1 big pinch of kosher salt, plus 1 1/2 teaspoons, plus more as needed
1/2 large head of green cabbage, cored and cut in two pieces, then sliced into roughly 1 1/2-inch ribbons (this will yield about 5 to 6 cups)
3/4 pound conchiglie (small shell) dried pasta
1/8 teaspoon ground nutmeg
1 cup heavy cream
1/4 teaspoon freshly ground black pepper, plus more to taste
4 ounces Parmesan, Microplaned or very finely grated, divided in two (each will be about 1/2 cup packed)

Directions
1. In a 12-inch oven-safe skillet, heat olive oil over a medium-high flame. Add the uncased sausages and brown thoroughly, breaking up with a wooden spoon so they’re in small, half-teaspoon-sized pieces. Once deeply browned and just cooked through, use a slotted spoon to remove the browned meat, leaving behind the oil, and set aside (season it with the big pinch of salt as you do).

2. Add the chopped cabbage and 1 1/2 teaspoons salt to the skillet. Turn the flame down to medium-low. If things are looking dry at this stage, add another splash of olive oil with the cabbage. Cook about 20 to 25 minutes, stirring every so often, until cabbage is very tender, with a sweet and savory concentrated flavor, and browned in some spots.

3. While the cabbage is cooking, bring a big pot of well-salted water to a boil (figure about 1 tablespoon per quart), and cook the pasta for 2 minutes less than the box suggests, so it’s quite al dente. (It’ll cook more in the next steps.) Before draining, reserve 1 cup starchy cooking water.

4. When the cabbage is tender and browned, turn on broiler to preheat. Meanwhile, back on the stovetop, make a well in the center of the cabbage and add the nutmeg. Heat about 30 seconds, then add the heavy cream, 1/2 cup reserved pasta water, pepper, half the Parmesan, and stir until cheese is melted and cream has just barely come to a simmer. Use your spoon to scrape up any browned bits from the bottom of the skillet. Add the pasta and about 2/3 of the reserved sausage (keep the rest set aside), and toss. If you need to loosen up the sauce more, add another splash of pasta water and keep tossing.

5. Turn off the flame, and adjust seasoning to taste as needed. Top with the remainder of the browned sausage and Parmesan. Carefully, place under broiler. Watching closely, broil for about 2 minutes, until top is bubbly and browned.