What sleazy deal did Trump make with Erdogan? We don't know — but the mind reels 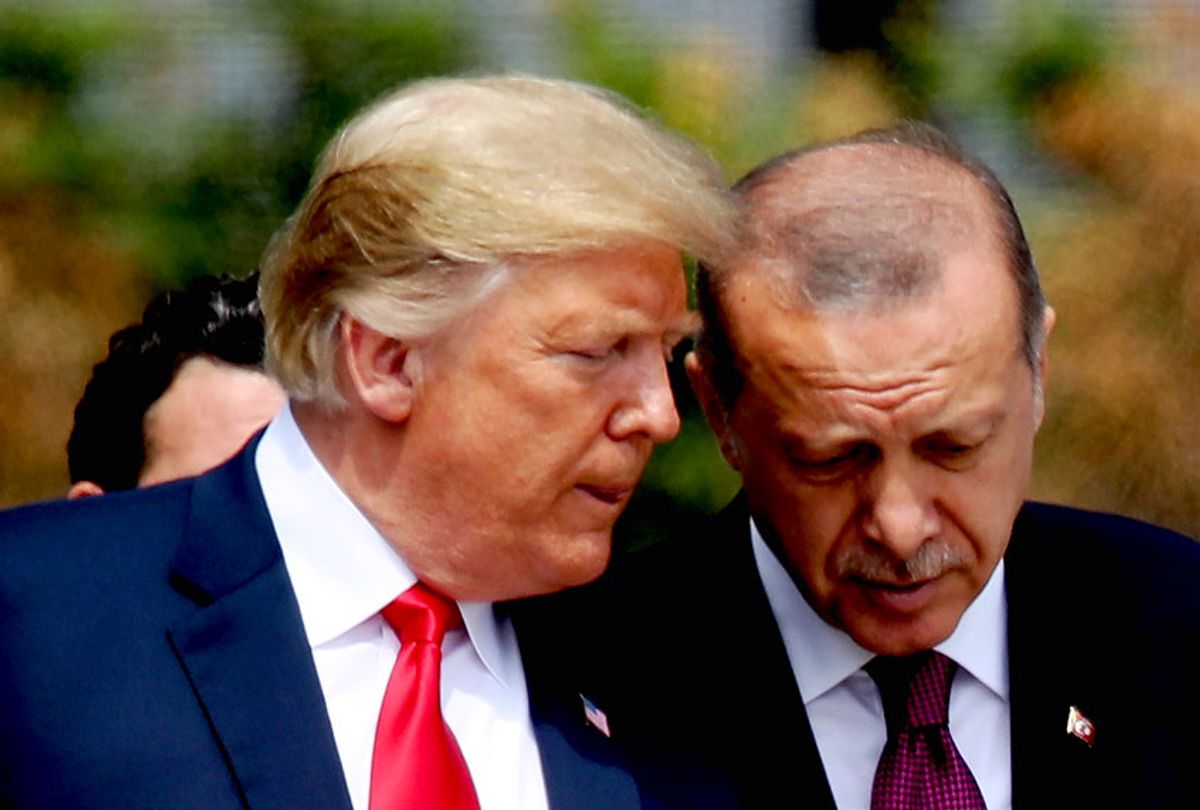 U.S. President Donald Trump (L) and Turkish President Recep Tayyip Erdogan attend the opening ceremony at the 2018 NATO Summit at NATO headquarters on July 11, 2018 in Brussels, Belgium. Leaders from NATO member and partner states are meeting for a two-day summit, which is being overshadowed by strong demands by U.S. President Trump for most NATO member countries to spend more on defense. (Sean Gallup/Getty Images)
--

Extraordinary times demand extraordinary measures. If you value Salon's original reporting and commentary, please take a moment to support our writers directly. Right here, right now, you can make a direct contribution to Bob Cesca to help make his work possible. All donations go directly to our writers.

There are countless possible explanations, but it wouldn’t surprise me to learn that Donald Trump decided to allow Turkey to attack the Kurds in northern Syria in order to crowbar the news cycle away from his impeachment. But as I’ve been writing from the beginning, Trump always makes things worse for Trump. Instead of tamping down the impeachment story, he’s merely augmenting the justifications for his constitutional removal from office.

Apart from the bloody foolishness of his snap decision, which I’ll cover here presently, my first reaction was this: What did Turkish President Recep Tayyip Erdogan, a fellow autocrat, offer Trump in return for abandoning U.S. allies in the region, both the Kurds and the Syrian Democratic Forces (SDF)? What kind of election interference did Erdogan pledge to Trump? Or did Trump cave because his beloved Trump Tower Istanbul was threatened with demolition? Here’s a big one: What if Trump made this decision without all of his marbles in attendance?

Normally, such assumptions would be regarded as ridiculously conspiratorial, but after three years of this firehose of madness, they’re mainstream. Trump derped his way into all this, propelled by his unearned hubris as well as his defiant incompetence, by attempting to pull similar self-dealing agreements with Ukraine, China, Russia and possibly others. We’d be naive not to leap to that conclusion, among others. In fact, knowing that Trump claims it’s legal and proper behavior to cut these personal deals, as emphasized by both his public confessions and his interview with George Stephanopoulos earlier this year, when he defended the use of dirt attained from foreign governments, there’s no way he did this as part of a legitimate foreign policy agenda.

An insider source who claims to sit on the National Security Council told Newsweek, "President Trump was definitely out-negotiated and only endorsed the troop withdraw to make it look like we are getting something — but we are not getting something." The official didn’t say whether Trump was getting something personally, and it could be the case that separate conversations took place, with deal points spread around mob-style.

There’s simply no legitimate reason for Trump to do this.

Surely, Trump’s been told what the short- and long-term ramifications are, but based on his statements since Sunday he doesn’t seem to care. Former Defense Secretary Jim Mattis resigned over Trump’s earlier attempt at a precipitous withdrawal from the region, so I refuse to believe no one’s explained to the president what the long term blowback will be, which will likely include an upswing in anti-U.S. terrorism, the further scrambling of the power balance in Syria, heightened distrust of U.S. alliances, and a possible Kurdish genocide at the hands of Turkey, a nation with some experience in that area — plus an array of unforeseeable consequences too.

Yes, in a perfect world, we shouldn’t get inextricably tangled up in Middle East wars, but as we learned with great pain in Iraq last decade, entering, staying and withdrawing from these excursions requires careful planning and consideration — not kneejerk choices by a transactional, mentally unstable game show host.

Again, how else are we supposed to peg this? The only explanation the president has given so far came during remarks about a tech deal with Japan on Monday at the White House. The president seemed to suggest he pulled the trigger because withdrawing from “endless wars” received applause during one of his Red Hat rallies. In other words, he’s conducting foreign policy based on screeching throngs of sycophants who’d cheer for Trump if he made fart noises with his armpit.

They’ll likely cheer, too, for his threat to “totally destroy and obliterate the economy of Turkey” if Erdogan pulls something he doesn’t like. You know, like he’s “done before,” he added. This is about as realistic as insisting that he’s bionic and if anyone tries anything hinky, he’ll totally kick Bigfoot’s ass.

That said, Trump seldom makes good on his hollow Twitter threats. I’ve taken to categorizing his most atrocious blurts as either “Space Force” or “Nuking Hurricanes.” The former, Space Force, was a crazy blurt that became a real thing, while the latter, nuking hurricanes, was a crazy blurt that was abandoned as quickly as it was reported. Similarly, Trump’s been threatening to have House Intelligence Committee chairAdam Schiff arrested for treason for daring to paraphrase the president’s call with Ukrainian President Volodymyr Zelensky. He has also called for the impeachments of Mitt Romney, Schiff and Nancy Pelosi — even though there’s no constitutional mechanism for impeaching members of Congress. All of that falls under the nuking hurricanes category. But this business with Turkey and the Kurds? Space Force, only bloody, destructive and breathtakingly foolish.

"The U.S. national security has entered a state of increased danger for decades to come because the president has no spine and that's the bottom line,” the NSC official said to Newsweek. Thank you. It’s about time someone emphasized the reality that Trump is a paper tiger. His bark is far worse than his bite. He’s a weak and feeble man who, despite his ludicrously exaggerated bragging, isn’t anywhere close to being as popular, mighty or smart as he insists over and over and over again. Worse, his odds of losing the election must be terrifying to him, given how he’s desperately thumbing through his Rolodex to recruit outside help from friendly and frenemy regimes alike.

Now his myriad weaknesses are getting him into trouble with some of his only allies in the news media and Congress. Nearly everyone, from Sen. Lindsey Graham to "Fox & Friends" co-host Brian Kilmeade to Mitch McConnell, condemned Trump for abandoning the Kurds, right in the midst of his impeachment. Toss into the mix his name calling and Twitter flaming of Romney, and we can only conclude he wants to lose every procedural vote during his inevitable impeachment trial in the Senate — procedural votes that are designed to help his defense but will fail without a simple majority. In such cases, Trump could lose three Republican votes, no more; the perfect time for Trump to go around pissing off Senate Republicans. Turns out, Trump doesn’t have allies, only future targets and scapegoats.

The presidential removal mechanisms of the 25th Amendment are there for a reason, and we’re observing one of those reasons right now. A president who says in public, in writing, that he possesses “great and unmatched wisdom,” is what “generalissimo” strongmen say just before being deposed and incarcerated. Trump's public statements in recent weeks, including his confessions, his outlandish threats and his inability to discern right from wrong all serve as confirmation that he’s mentally incompetent and therefore incapable of making decisions more complicated than choosing the shade of clown makeup he applies to his face in the morning. And yet there he is, defying the advice from his national security advisers, allowing the possible decimation of the Kurds because of Trump Tower Istanbul or some other compromising McGuffin.

Ultimately, we don’t yet know whether Trump’s withdrawal from Syria had a quid pro quo component, despite so many reports of similar agreements. Lacking any other decent explanation, the possibilities are harrowing. The only thing we can ascertain for sure is that Trump’s cheese is quickly sliding off his cracker in the face of his likely impeachment. We also know that Trump clearly didn’t make this decision based on a nuanced understanding of Middle East policy, nor was it the result of advice from career foreign policy experts. What else could it be — and what new devilry is waiting for us tomorrow? We need real answers, and soon.