Why over 130,000 new voting machines could lead to more distrust in U.S. elections

The divide over ballot-marking devices is not merely philosophical 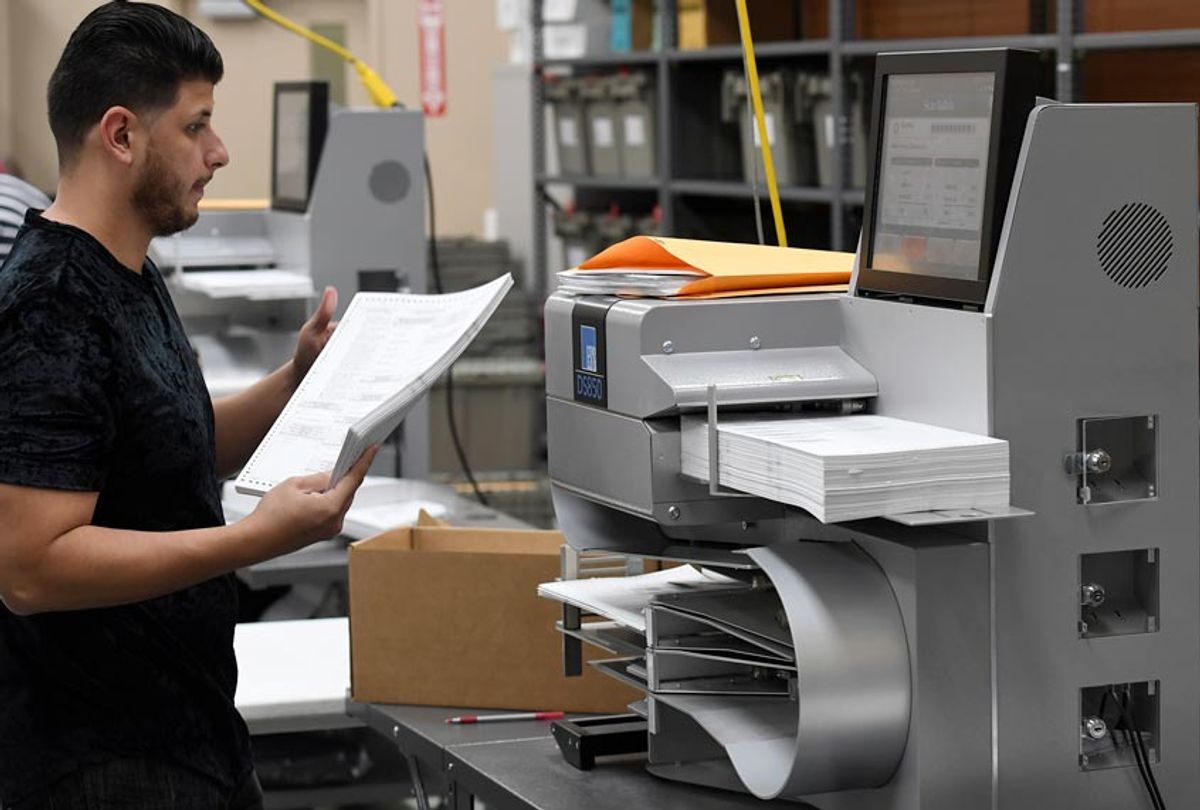 Across America, counties and states have acquired at least 130,000 new precinct voting machines that will debut in 2020’s primaries — including areas that can sway national elections. But the machines are controversial, splitting independent experts and election activists on issues that will likely affect public trust and confidence.

Those key issues concern the transparency of voting and counting votes, whether reported election results can be double-checked and what role local election boards should play after Election Day to judge voter intent on ballots during challenges and recounts.

“Recount lawyers love hand-marked paper ballots and we are eliminating that [scrutiny] with this system,” said Mac Beeson, a regional vice president with Election Systems and Software (ES&S), at a recent demo in North Carolina. ES&S is the U.S.’s largest election vendor and has sold 67,000 new BMDs. “That’s a much bigger deal than [using] bar codes [on the ballot summary cards], I can promise you that… Voter intent is a major, major issue.”

But BMDs have serious critics at the starting and finish lines of voting. Some counter that this system replaces indisputable human acts (hand-marking ballots) and judgments (post-voting reviews) that build public trust, but contend that BMD counting software cannot be shielded from manipulation by bad actors. The newest auditing tools won’t catch such hacking if it occurs, they say.

“Everybody is saying, ‘Oh, just do a risk-limiting audit, that will take care of it,’” said Philip Stark, a UC Berkeley mathematician who created that statistical process a dozen years ago (which some states are piloting and requiring in new laws). Outside experts have cited similar methodologies to verify election results on BMDs.

In other words, Stark is saying that these new systems might report that all of their records and counting were consistent, “but you will still have zero evidence of whether the printout reflects voter intent. You don’t have what the voter did to look at it.”

These diverging views are not a mere clash of priorities. Access, efficiency, observable and verifiable outcomes are all issues that impact how elections are run and seen — including what evidence can be shown to winning and losing sides to legitimize results.

This summer, Georgia, South Carolina and Delaware chose new ballot-marking device systems for their entire states. Georgia will buy 30,000 machines. Pennsylvania’s biggest cities, Philadelphia and Pittsburgh, might soon have them. Los Angeles replaced its countywide system with 31,000customized BMDs. A quarter of North Carolina’s counties must select a new system for 2020’s primaries, and most appear to be picking BMDs.

Most of the opposition to BMDs has come from election integrity and civil rights activists who say these systems are not sufficiently trustworthy, which is their bottom line. Printing a ballot summary card with bar codes or a QR code to record votes is not transparent, even if there also is a readable printed text of the voter’s choices below. Voters might review the readable text, but scanners analyze the bar or QR codes to tally votes, which is not the same baseline.

Critics also cite academics like Stark and computer scientists who say that hackers could secretively re-program the software running the new systems to print one set of votes on paper summary cards, but present another set of votes when submitting its totals.

“Have you heard of the expression ‘software-independence’ in voting systems?” Stark said. “The idea is that if there is a problem with the software, even if you don’t detect the problem, you can know that there is a problem with the [reported] outcome. Using BMDs basically makes voting systems not software independent, because as a practical matter, altering the software in a way that allows votes and the outcome to be altered cannot be detected. There is no mechanism to detect it.”

As expected, BMD vendors say hacking scenarios are unrealistic. Meanwhile, some nationally known independent election policy experts in non-profit circles and academia, who have no financial stake in BMD sales, have recently been saying that these systems can be audited and have other benefits — namely enlarging turnout among infrequent voters and unrepresented communities. These experts have begun to work with states buying BMDs to create new policies and procedures surrounding this technology.

Notably, these independent experts say that the most frequent anti-BMD argument is based on a “mistaken” premise. They say that there is no difference between the way a precinct scanner reads a paper ballot that has been hand-marked or printed by a computer. In short, they contend there’s no difference in these records.

“A hand-marked paper ballot is just a hand-drawn bar code,” said David Becker, executive director of the Washington-based Center for Election Innovation and Research, a non-partisan non-profit. “A voter might see a mark next to a vote, but that mark means nothing until a computer, which has been programmed to do so, associates the coordinates of that mark on a piece of paper with a vote for a particular candidate.”

In other words, the vote-counting process begins with a scanner creating a digital image of the ballot. Software then analyzes that image as a grid—to associate the location of marks on the page (by pens or via bar codes) with candidates and ballot measures.

“This is how a ballot is tallied whether it uses a bar code or not,” Becker continued. “We use systems like these because we demand fast and accurate vote tallies, as we should. And machines can count ballots more accurately and quickly than people.”

Becker is an ex-Justice Department voting rights litigator who then created a non-profit that has helped states to register around 10 million new voters nationally. He said the anti-BMD activists “are mistaken in thinking that if they mark something by hand then that is the vote, when, in fact, that hand-marked ballot is machine counted using computer code, just like a machine-marked ballot.”

Becker does not oppose hand-marked paper ballots, but said they are “more likely to have errors or mismarks, and are more likely to make voting difficult for people with disabilities and [for people primarily speaking foreign] languages.”

Another pro-BMD argument concerns infrequent voters. Whitney Quesenbery, co-director of the non-profit, non-partisan Center for Civic Design and a ballot design expert, is finishing a soon-to-be-published report that will conclude key cohorts of infrequent voters are more confident using BMDs than hand-marking ballots.

“What do people trust?” Quesenbery asked. “They trust that they know how to hand mark a ballot. This turns out to be quite inaccurate if you look at the residual vote rate [voting more than once in a race or skipping it]. It’s one or two percent. And then if you look at when there’s a particular usability problem [confusing voters], it shoots up to percentages that affect election results. So people shouldn’t trust themselves so much.”

This divide over BMDs is not merely philosophical. While opponents have been trying to stop states and counties from buying these devices and instead acquire systems built around hand-marked ballots, a different cadre — including Becker, Quesenbery and the national advocacy group Verified Voting — has been working with officials buying BMD-based systems to create new protocols to attest to their results.

Another expert supporting BMDs is Rice University’s Dan Wallach, a computer scientist specializing in voting systems. In August, he wrote a paper criticizing Stark’s opposition to BMDs and suggested that a variation of the auditing approach that Stark pioneered — called risk-limited audits — could verify BMD results. Becker said he expected Wallach’s method to be tested in 2020.

“My essay considered a new sort of audit I called a ‘live audit,’ where trained auditors will exercise a BMD, selected randomly, with a pre-made script of choices, and will then examine the output of the machine,” Wallach said. “They would examine the human-readable parts as well as the bar codes, to ensure that both match up to what the script had them enter in the machine. Even one counter-example is evidence of a serious problem and would set off suitable alarm bells and emergency procedures.”

Stark called this approach “wishful thinking” on many levels, which he enumerated in a recent scholarly article.

“Yes, you can do a risk-limiting audit on the [ballot summary card] paper,” he said, referring to statistically sampling randomly pulled printouts and comparing their votes to larger electronic tallies.

“The question is: What does that show?” Stark asked. “That shows that the paper was tabulated correctly. It doesn’t show that the [election] outcome was right. The whole point of all of this is to correct the outcome if the outcome is wrong. But once you have separated the evidence from what the voter [physically] did, it can no longer offer that guarantee.”

These diverging views will not be reconciled. Moreover, they are likely to split election advocates who focus on verifying votes into two camps. This debate not only affects whether voter’s choices can or cannot be double-checked at the starting line of voting — at the precinct level — but what evidence local election officials can evaluate at the finish line, in challenges and recounts.

Chris Sautter, an adjunct professor of election law at Washington’s American University and a longtime experton post-Election Day procedures, said the arguments over BMDs are not new, but will likely lead to doubts about outcomes in very close contests.

“These arguments for BMDs are the same arguments that were used first for computer punch cards [which caused problems in Florida’s 2000 presidential election] and then for DREs,” he said, referring to the entirely paperless systems now being replaced.

“Each time when these systems crash — and inevitably they do—and there is an election outcome in doubt, there is no way to figure out what really happened — who the true winner is,” Sautter said. “That happened in numerous instances with DREs and it will occur again with BMDs further undercutting confidence in elections.”

The opponents of recounts exaggerate the number of genuinely disputed ballots, he said, adding that some states, like Virginia and Minnesota, have established standards to review disputed ballots. In contrast, he said there is no obligation for states to undertake audits, which is a different process and often is not done until after winners are certified — making their findings academic.

“Our entire system of jurisprudence is based on the right to review and the right to appeal an adverse decision,” he said. “BMDs, just as their predecessor the DRE, eliminate a fundamental American right to meaningful review.”

Debate and controversy over election technology, election results and proof of unpopular outcomes are as old as America itself. No matter what any faction or interest says, they are not disappearing as the newest generation of voting machinery debuts in 2020.