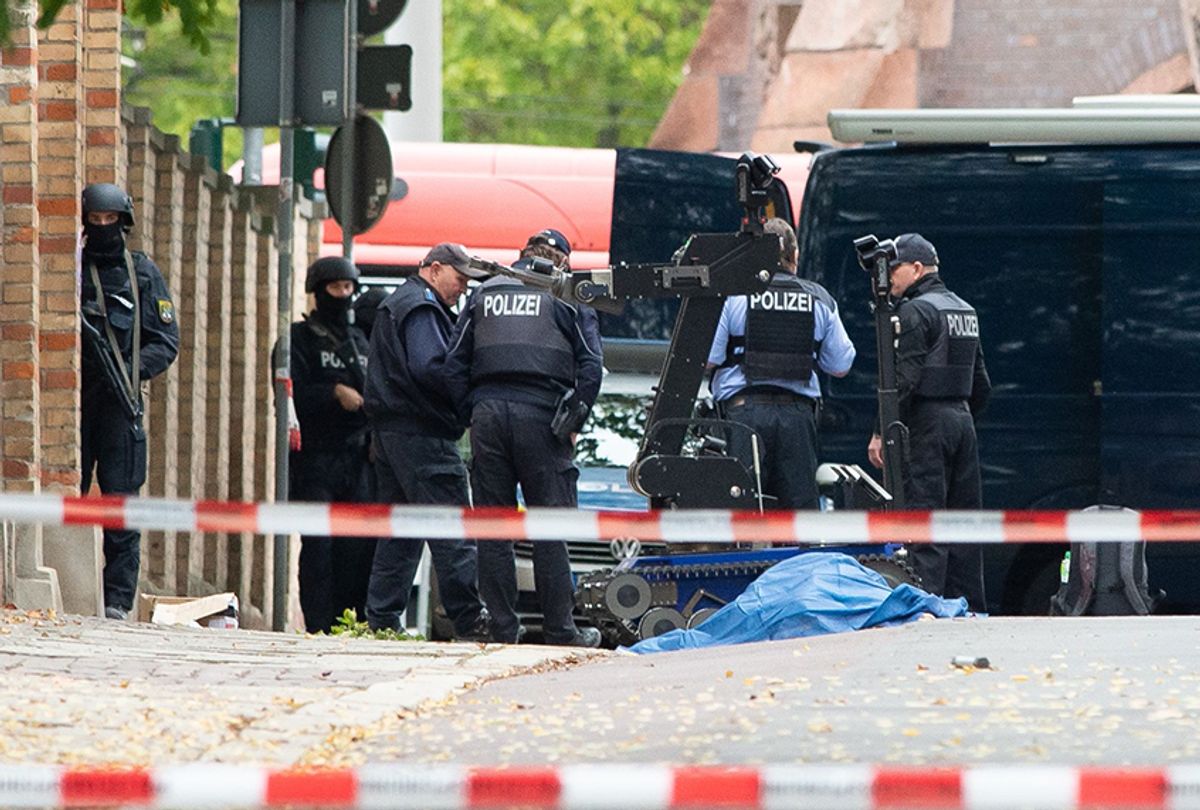 At least two people were fatally shot on Wednesday near a synagogue in Halle, Germany, during prayer services for Yom Kippur, the holiest day on the Jewish calendar.

Police in Halle said in a statement that two people were killed. Police later said they arrested one person, though an earlier tweet suggested there may have been multiple “perpetrators” who fired “several shots.” Police warned people to stay in their homes while they searched for other potential suspects in Halle, a city in eastern central Germany with  a population of about 240,000.

Germany’s federal prosecutor is leading the investigation, suggesting that officials are treating the shooting as a “politically motivated” attack,” The New York Times reported.

German public broadcaster MDR aired a video showing a man wearing a helmet and an olive-colored jacket getting out of a car and firing four shots with a long-barreled gun. A witness told the outlet that the gunman was dressed in military gear and armed with multiple weapons. Local news outlets also reported that a hand grenade was lobbed into a Jewish cemetery nearby, according to the Times. Police also told MDR that more shots had been fired in the Halle suburb of Landsberg, but those reports have not been confirmed.

According to unconfirmed reports on Twitter, the apparent gunman live-streamed the attack using a head-mounted camera, as did the mosque shooter in New Zealand last March. The video footage allegedly includes anti-Semitic comments in English.

Max Privorotzki, a local Jewish leader, told the German news outlet Der Spiegel that the gunman or gunmen appeared to try to enter the synagogue but were repelled by police officers posted outside.

“At the moment, there are 70 to 80 people inside the synagogue,” Privorotzki said, according to the Times.

Images aired by German news outlets showed a body lying about 30 yards away from the synagogue, according to the Associated Press. Der Spiegel reported that one attacker was believed to have tried to flee in a taxi before being arrested by police.

Witnesses said the gunman also fired at a nearby kebab shop, killing a male customer inside, The Guardian reported.

Police increased their presence outside synagogues in Halle and nearby areas after the attack, according to the report. All Jewish synagogues, schools and cultural centers in the region are being guarded around the clock by police.

A spokesman for German Chancellor Angela Merkel said the shooting was “terrible news” but government officials did not have any further information on the attack, according to the AP.

"Together with you, I would like to express my sympathies to the German police forces, the German people and the German Jewish community," European Parliament President David Sassoli told lawmakers in Brussels Wednesday. "Our thoughts are with the families and friends of the victims and the citizens of Germany."

Earlier this year, the country’s top official responsible for efforts to combat anti-Semitism suggested that Jews should not wear their skullcaps everywhere in public.

Michael Friedman, the former president of the European Jewish Congress, told the Times in May that ”when a representative of the federal government officially tells the Jewish community that ‘you are not safe against anti-Jewish hate everywhere in Germany,’ then that is a pathetic display for the rule of law and political reality.”