Elizabeth Warren makes a major appeal to the left — but will her fundraising flip-flop backfire? 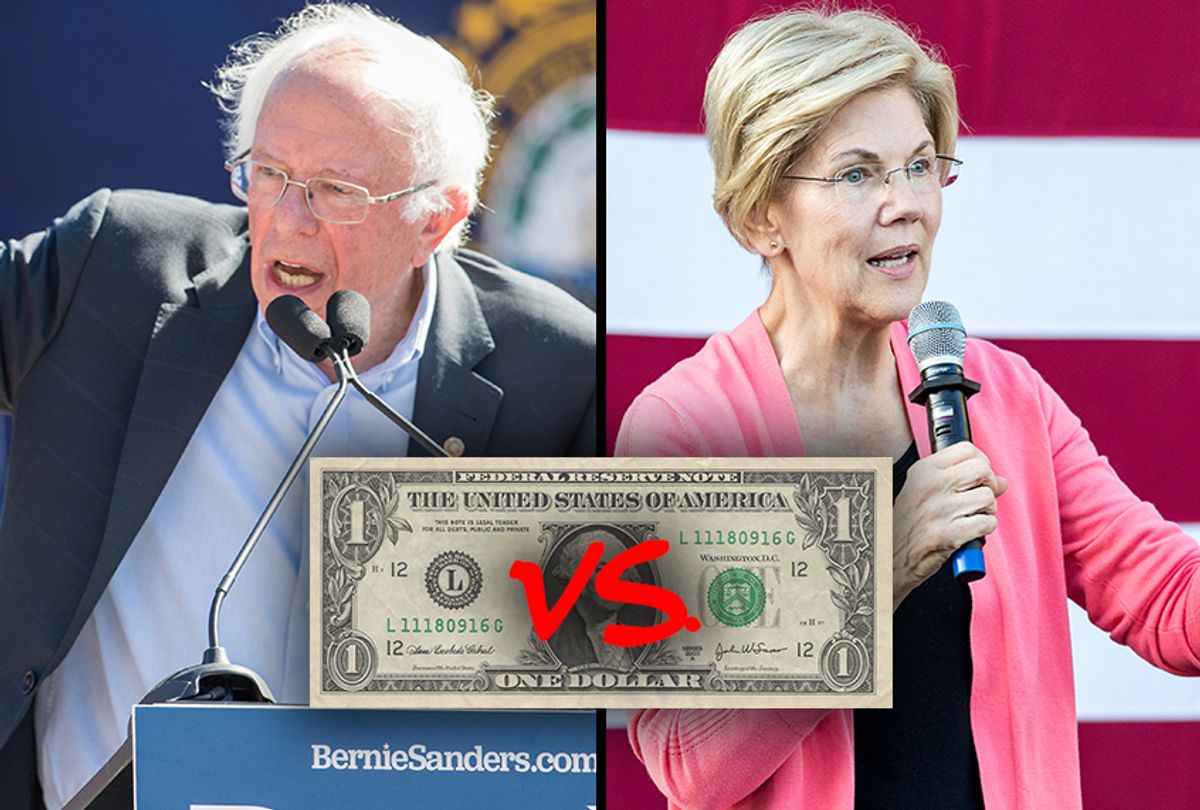 President Trump has been running for re-election since the day he first took office, and he is already breaking fundraising records this go-round. But while Trump’s massive war chest continues to grow, one of his leading potential Democratic opponents has suddenly decided to make a major money move which could seriously imperil Democrats’ chances at winning back the White House.

In a shift from her prior stance, Elizabeth Warren announced Tuesday that her campaign would commit to not taking campaign cash from big-dollar fundraisers — even in a general election match-up against Trump.

“I’m not going to do the big-dollar fundraisers. I’m just not going to do it,” the Massachusetts senator told CBS News. "The whole notion behind this campaign is that we build this together, and that’s exactly what we’re doing."

Warren had initially made a primary-only pledge to avoid mega-donors but expanded her promise in an obvious attempt to win over skeptical Democratic primary voters. One of Warren’s leading competitors, Sen. Bernie Sanders of Vermont, is the field’s top fundraiser and already vowed off such fundraisers. Raising $24.6 million in her most recent fundraising quarter, Warren is right behind Sanders in total dollars raised and hopes to boost her appeal by adopting yet another plank of Sanders’ progressive platform.

Although this is not exactly a flip-flop — Warren never committed to take major funds in a general election — it does appear as though she was slightly strong-armed into making this announcement. Warren initially defended her hesitance to commit Sanders’ pledge by describing it as “unilateral disarmament” against Trump, who does not discriminates against any donor — no matter how scrupulous. Her change makes clear just how untenable it became to run as an anti-corruption candidate in the primary only to perhaps turn around and accept corporate PAC money in the general.

Warren told CBS News, "I will not be forced to make changes in how I raise money.” And she plans on sticking with her grassroots message to fight the "bazillionaires and corporate executives and lobbyists."

To be clear, no matter who wins the primary, there will still be hundreds of millions of dollars from wealthy donors which will help the Democratic nominee. The key, of course, is that this is not actually "unilateral disarmament." Warren is smartly avoiding the appearance of corruption over the marginal benefit of big fundraisers. But rich donors are still free to donate to her campaign — Warren’s just not going to sit down with rich people and listen to their interests at the expense of the little guy.

One of the thousand cuts against former Secretary of State Hillary Clinton during her 2016 campaign was that her "tough on Wall Street" stance was undermined when she held closed-door speeches with executives from corporate Wall Street firms such as Goldman Sachs. Her campaign was forced to fight tooth and nail to hide the transcripts of those speeches for appearance, and when they were released they were relatively innocuous.

Of course, Hillary Clinton raised more money than Trump — proof that money alone is not sufficient to win a national election. Warren understands that she will need a committed and energized base of support. Her money pledge is more of a move to cultivate that base than it is an idea inspired by principle. However, as it is meant to appeal to Sanders’ voters, it could backfire.

As the primaries heat up and the relatively small differences between the progressive frontrunners is debated, Warren will undoubtedly be knocked for copying Sanders’ platform. If she succeeds and moves on the general, Warren's pledge will be scrutinized and cast as a broken promise if she so much as hosts a wealthy donor at any campaign event, while Trump will remain free to fundraise as he pleases.