The all-new "Nancy Drew" is progressive and hooking up, y'all

The CW brings the classic teen sleuth into 2019, and guess what? She bangs, she bangs! And solves crimes 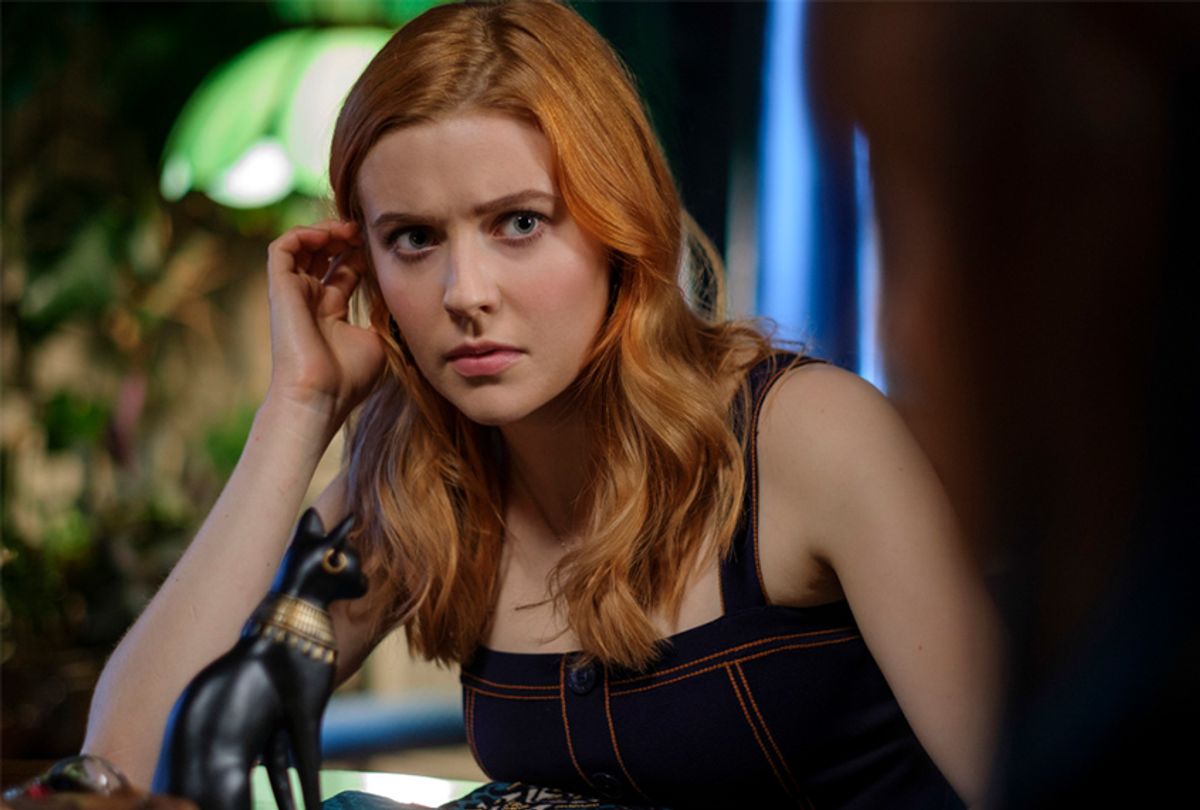 When first tuning into The CW's adaptation of "Nancy Drew," it takes a second to register what we’re witnessing, this being the classic teen sleuth that our parents loved and all. Following a brisk table-setting monologue and a flashback montage of the life events that made our girl detective the woman she is today, the scene briskly cuts to a close up of shelves shaking, making the metal cans and other objects shudder as a loud thunk! thunk! thunk! sounds in the vicinity.

Is the culprit an unbalanced load in a nearby washing machine? Is somebody struggling with a heavy object that refuses to budge? Nope. The culprit we soon see, is some furious ham-smacking taking place on a nearby mattress between a dude and...holy cow, it’s Nancy.

That’s Nancy Drew, the teen detective shown on scores of 1960s book jackets wearing skirts that hit her just below the knee and blouses locked down to the top button. Maybe if the mystery takes place in warm weather she shows a little arm or a slight bit of décolletage.

Generation Xers know her as a late-'70s adventuress played by Pamela Sue Martin who wore pantsuits and high-necked baggy coats. Somehow despite being buried in synthetic fabrics, Nancy catches the eye of Parker Stevenson’s Frank Hardy, although they’re all too devoted to their job to act upon their hormones. Anyway, she disappears in Season 3 because in 1979, ABC assumed that everybody was hot for Shaun Cassidy and his fabulously feathered mane.

Today’s Nancy Drew, however, is all about eating her cake near the ocean, and you know what? Good for her. But you can’t blame viewers who remember ye olde Nancy for clutching their pearls at the sight of this thoroughly modern “Nancy Drew,” premiering Wednesday at 9 p.m. on The CW.

This updated iteration of “Nancy Drew,” as re-imagined by “Gossip Girl” executive producers Stephanie Savage and Josh Schwartz alongside executive producer Noga Landau, is intentionally diverse. As played by Kennedy McMann, Nancy remains the brave, intelligent, resourceful and irrepressibly curious person people expect her to be. She also has a knack for breaking and entering, and that’s OK because she’s doing it for all the right reasons.

Nancy Drew's core traits could not change without fundamentally transforming what the character has always been. The milieu of Nancy Drew has shifted with the times over its many years. The title's earliest mysteries could be casually racist and sexist — what wasn't, honestly? — and when those critiques were pointed out to its publisher during the 1960s the brand responded by removing the presence of minorities entirely.

She’s lived in small towns and big cities. This new version makes her a 19-year-old stuck in the seaside town of Horseshoe Bay, Maine, where she’s healing from the untimely death of her mother, putting college and freelance crime-solving on hold. To pass the time and help out her widower father Carson (Scott Wolf), she works at the local diner.

Her co-workers include the surly George Fan (Leah Lewis); Bess Marvin (Maddison Jaizani), who is the new girl in town presumed to be wealthy; and Ace (Alex Saxon), the local burnout. Oh, and Nancy’s mattress partner? Why, it’s none other than Ned Nickerson (Tunji Kasim), who goes by Nick.

George and Bess are familiar characters from the novels, as is Nick, but in name only. In the books and the ‘70s TV series Nancy and George are best friends. In this version George hates Nancy due to some initially unspecified trespass that occurred in high school. Nick, Nancy’s college sweetheart in early novels, has a criminal past here which, of course, is sexy.

Nancy herself, meanwhile, is suffering and lost and hesitant to be hurt again, hence the ugly-bumping. Her arrangement with Nick is a strings-free kind of deal, even though he’s obvious caught feelings and she’s fighting fuzzies of her own. To feel goes against her instinct to detach and shut down and whatever. But then, of course, a socialite’s murder happens conveniently outside the diner during Nancy’s shift, making her – along with her co-workers and not-a-boyfriend – prime suspects. Although she’d prefer not to sleuth, sleuth she must, if only to clear her name.

To the average TV viewer, the sight of a female lead entwining with a dude is commonplace. It would be weird if a CW heroine weren’t at some point seen enjoying carnal pleasure on her terms, because it's fun. Even “Jane the Virgin” eventually had its heroine relinquish her V-card, and the writers handled that pivotal moment realistically and honestly.

We’re not prudes. But Nancy Drew is, or rather she was written that way for most of the previous century. Generations of readers, mostly women, were raised on very chaste versions of the girl sleuth’s exploits, which were penned by various people under the pseudonym Carolyn Keene.

Then again, we’re now in a TV landscape where Archie rammed Veronica in the shower and Betty broke her virginity on Jughead. Hell, even Sabrina the Teenage Witch straight-up worships Satan. It’s doubtful that watching Nancy Drew get busy will be a deal-breaker for most people; a slap of cognitive dissonance for some, definitely. Imagine what it would be like if Hulu decided that Holly Hobbie, circa 2019, would save her grandmother’s café by applying her baking skills to meth manufacturing, because progress and also, a tough economy. (To be honest, I’d watch that.)

So if it’s not that much of a deal, why are we crowing about Nancy Drew doing the nasty? Because it is the very first significant thing we learn about present-moment Nancy Drew, that she bangs. Kind of a conventional way of announcing “this is not your mother’s Nancy Drew,” don’t you think?

Even more disappointing is that this detail is quite possibly the most interesting and modern thing about her, yet it fails to distract from how basic this cookie-cutter "Nancy Drew"  feels. There are good reasons why a number of television creators have attempted to revive “Nancy Drew” and failed, including an attempt by CBS a few seasons ago that would have presented Nancy as a woman in her 30s. Some characters are such throwbacks to a different time that they defy modernization. Nothing is impossible, of course, and a premiere episode is not necessarily indicative of how a series might eventually shape up to be.

However, this “Nancy Drew” is part of a TV subgenre very much defined by “Veronica Mars,” which made its own return to only a couple of months ago, as well as Schwartz’s other teen shows and “Pretty Little Liars.” Launching this classic (if not nearly antique) title in the wake of those other series demands a bolder take than “Nancy Drew, but noir and also DTF!” Weirder, one of the mystery arcs has a such a creakiness to it that “Scooby Doo” seems edgy in comparison.

The praiseworthy elements of “Nancy Drew” are entirely aesthetic: the diverse cast is a plus, although McMann and Kasim have very little chemistry. McMann gives a fine performance as Nancy, although Lewis and Jaizani are sparks in comparison. Martin, the original TV Nancy Drew, has a cameo. It’s also laudable that the writers acknowledge Nancy’s mourning for mother in a real, human way and not merely as a tool to explain her resourcefulness, as seemed to be the case in the books.

What makes Nancy Drew's appeal span generations, however, aren’t her relationships. It’s the mysteries themselves and the determined creativity she demonstrates as she untangles them. The first two episodes provided for review do not yet prove that this new drama has captured that very crucial aspect of the "Nancy Drew" legacy quite yet.

On the other hand, it does make a dirty bird wonder what might happen if the Hardy Boys swing by for a visit.