"Jane the Virgin," satisfied at last: TV gets real about first-time sex 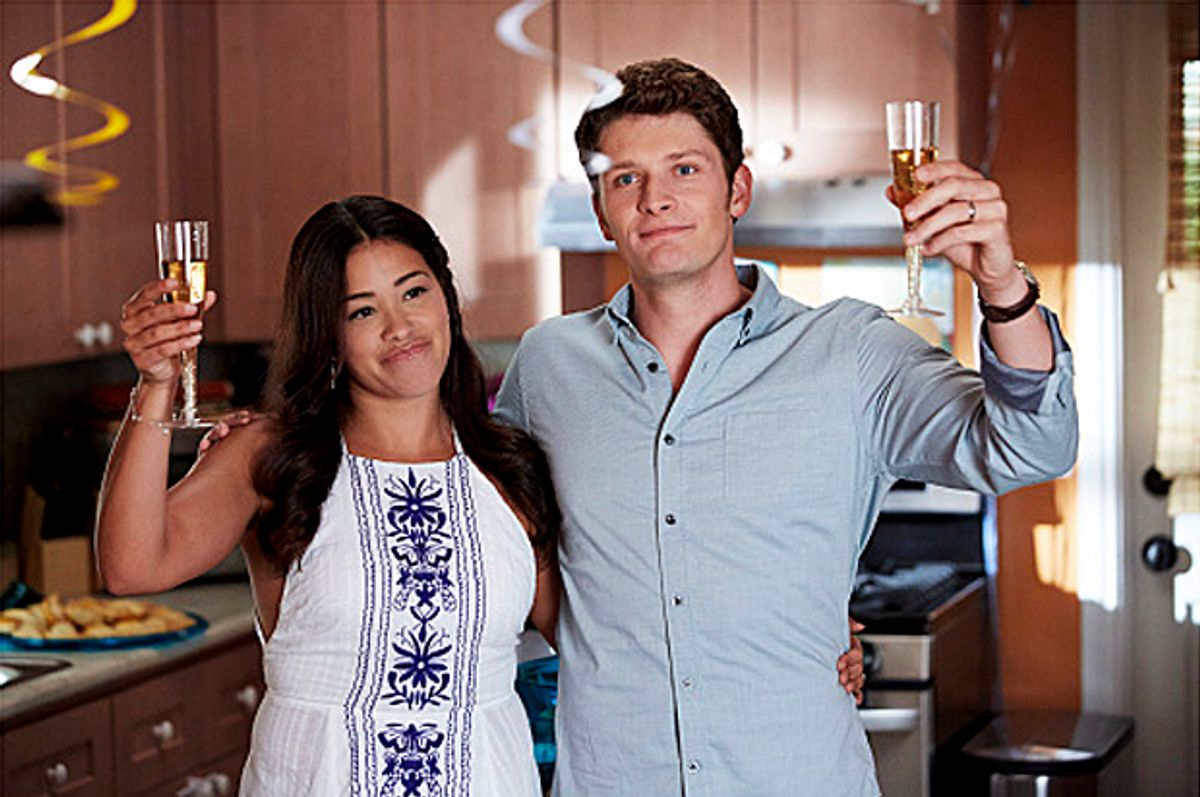 After more than two years, one accidental artificial insemination, childbirth, a suspenseful love triangle, a wedding, a shooting and just a touch of post-traumatic stress, on Monday night, the CW's beloved Jane, a virgin, became a virgin no more. And what was her verdict on the long-postponed deflowering, when she finally bedded her new husband Michael? Kinda meh. Not so good for Jane, but great for sex on television.

Even before Jane and her soul mate got down to business at last, this final frontier was being heralded as a television event. And at first, we seem to know exactly what we're in for. On Monday's episode, right before they hit the sheets, Michael tenderly admits he's a little nervous, too, and that, "I want it to be good for you." Jane assures him, "It's going to be perfect because it's you." Then it's not.

Our discreet narrator guides us away from the action to an animated rocket launch and returns us to the afterglow, where a satisfied Michael beams, "Wow. You and me, finishing at the same time, about as good a first time as I could have wanted." Turns out, however, that Jane's finish was faked.

The rest of the episode cleverly explores Jane's shocked confusion and shame. Could all those years of her grandmother's scolding warnings that losing your virginity is like crumpling up a beautiful flower have gotten in Jane's head a little? Yeah, maybe. Could her impulse to please her partner have overridden her own desires? Absolutely.

Jane later confides to her friend Lina that she "panicked" and could tell Michael was ready to wrap it up, so she pretended she was, too. "Faking orgasms are for nights when you're trying to get some rando out your apartment," Lina chides, "not for the guy your'e supposed to have sex with for the rest of your life."

Jane wisely soon fesses up to Michael, who asks "Have you faked it before, when we did . . . other things?" It's a smart way for the show to make it clear that virginity exists on a continuum of activities, and that Jane is no stranger to the O zone.

Michael then  gamely — and bravely for network television — tries to attend to her "other things"  first. Now, however, too self-conscious and filled with performance anxiety, Jane can't get her groove on, prompting a hearty "BOOOOOOO" from the narrator.

The couple have a few more failed attempts, until finally, in a heart-to-heart with her mother Xo, Jane weepingly confesses that she feels like she's now lost a part of her identity. "I've been dying to get rid of this for so long," she sobs. "This is so stupid!"

Yet she had also been tenaciously hanging on to "this" for her entire life, and she's not sure who she is anymore. She also fears that she and Michael aren't compatible. With her mom's reassurance that sexual confidence and satisfaction take time and trust, Jane and Michael go back to the drawing board. And to the strains of Jackie Wilson's ecstatic "(Your Love Keeps Lifting Me) Higher and Higher," this time the rocket achieves full, explosively joyful liftoff.

Jane's transition from pregnant virgin to sexually vibrant married mother has been a long time in coming (PUN INTENDED) and, as always, Gina Rodriguez's sweet, funny, sexy performance captures all Jane's sexual confusion and courage. Every step of the way, Jane's story —  in which it turns out that the journey hasn't been toward a single  sexual act but a healthy, sexually satisfying relationship — has been entertaining as well as instructive.

Sex and pleasure aren't interchangeable notions. And now Jane, like plenty of other men and women who have likewise figured this out along the way, knows the difference.