In Vince Gilligan's occasionally bleak yet empathetic follow-up, Jesse Pinkman gets his day in the brutal sun 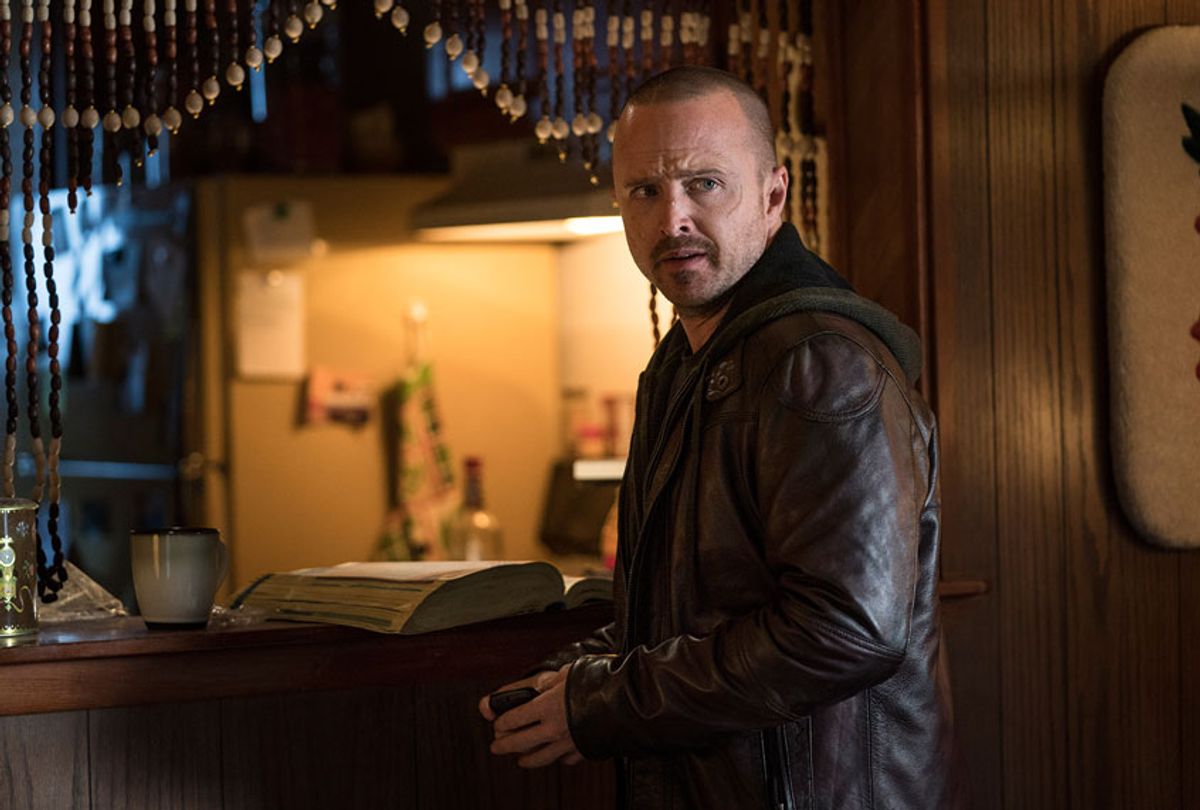 The following contains major spoilers for "El Camino: A Breaking Bad Movie," including the ending.

I had two pressing questions entering “El Camino: A Breaking Bad Movie." The first is simple: was Walter White actually dead? Since the conclusion of the groundbreaking series in 2013 — which left Walt (Bryan Cranston) on the floor, visibly wounded, but with a smile on his face — the character’s ultimate fate has been debated in many a message board and blog post. Turns out, I didn’t even have to watch the movie for that question to be answered. Earlier this week, creator/writer/director Vince Gilligan appeared on “The Rich Eisen Show” ahead the release of “El Camino.”

“Yeah, I’m gonna give you that one, Rich, because I love you so much,” Gilligan conceded in the interview. “Yes, Walter White is dead. Yes.”

The next question was a little less cut and dry.

“Breaking Bad” was a story of a man shifting between protagonist and antagonist; and while there definitely was and is a strong contingent of people who viewed Walt as a worthy hero up until the end (a fact that Gilligan has confessed troubles him), as his body count and tally of lies mounted, it was pretty evident that he’d sloped soundly into — relatively unsympathetic, in my opinion — antihero territory.

Throughout that transitionary period, it also became evident that meth-making partner/sidekick Jesse Pinkman (Aaron Paul) had been manipulated by Walt for a very, very long time. He’d once been Walt’s student, and the power differential still had a very real hold.  Without Walt’s interference, he would have been a small-time drug peddler at best; when he connected with his old chemistry teacher, that’s when his life truly began to spin out of control.

It’s a point that is crystallized late in the series when it is revealed, or at least strongly suggested, that Walt poisoned Brock Cantillo (Ian Posada), the son of Jesse’s girlfriend, as a way to turn him against competing drug kingpin Gustavo Fring (Giancarlo Esposito).

Meanwhile, “El Camino” is really all about Jesse and what became of him after he escaped the white supremacist compound where he was being held in captivity, speeding off in the titular car. Entering the film, I wondered if Jesse would stay a sympathetic character.

Essentially, would viewers continue to root for him up until the end or, like his mentor, would he descend into villainy? The short answer is this: this film is about watching a man claw his way towards a fresh start while sticking to some semblance of a code of ethics — though both are informed by a dark history filled with death and illegalities.

“El Camino” picks up where “Breaking Bad” left off. Jesse flees his captors, dodging the red and blue lights of law enforcement along the way. He finds his way to the house belonging to his old friends Skinny Pete (Charles Baker) and Badger (Matt Jones), and stumbles in on their video game night. They feed him — American cheese slices, instant noodles, and Pringles — and encourage him to finally bathe after his imprisonment.

When he eventually steps into the shower stall, he brings his pistol.

This is the first hint at how “El Camino” is going to flow. In a way, the film shows a lot, but moves forward very little. By that I mean there are definite lulls, and then there are bursts of action, and memory. Along the way, viewers slowly piece together Jesse’s time in captivity, much in the way Jesse is coming to terms with his own experienced trauma.

Much of this is accomplished through a series of flashbacks. The most chilling and telling is a thread involving Todd (Jesse Plemons), one of Jesse and Walt’s former associates and eventual captor. We’ve already established that Todd is basically a psychopath; in “Breaking Bad” he shot an innocent child who stumbled upon the trio in the desert, and — unlike Jesse, who is seemingly haunted by all the deaths he’s caused — felt no remorse.

In the same vein, Todd forces Jesse to aid him with “an errand.” He releases him from his cage and brings him to his apartment, where the body of his elderly cleaning lady is lying on the linoleum, a belt around her neck (a nice touch when you remember that Jesse was eventually able to strangle Todd with his own chains at the end of “Breaking Bad”).

She had discovered where Todd keeps his money — in massive stacks hidden in hollowed-out encyclopedias — and he needs help disposing of the body.

Flash-forward to present. Jesse has snuck back into that apartment and is searching high and low for the Todd’s new hiding spot for the money. This brings one of the most memorable shots from the movie, a really striking overhead view of the entire apartment with a series of Jesse’s pulling up floor panels and scraping back wallpaper, but also a section that lags just a little bit too long.

Right after Jesse has discovered stacks of cash hidden in paneling of the refrigerator, two men in FBI jackets enter the apartment. Here’s where we see some of Jesse’s moral convictions.

“I’m not a cop killer,” he says as he holds one of the men at gunpoint. He just wants to escape, he says; too bad these men aren’t cops. Jesse realizes these men actually played a role in keeping him captive, but not until after he splits the money with them as a way to secure his freedom again.

“El Camino” leans into some expected fan service by bringing back a few favorite old characters from the series (though Saul Goodman, played by Bob Odenkirk, is notably absent). One of these is vacuum repairman Ed, who has a side business that centers around helping criminals start new lives. Jesse pays him a visit, but realizes that he doesn’t have quite enough cash on-hand to pay Ed for a fresh identity.

This is the point when Jesse has to truly face his past, and in turn the present-day action picks up. Cue a call home, some stolen firearms, and a truly massive explosion.

It’s not a surprise where Jesse goes at the end of “El Camino."  It’s hinted at in the first flashback of the movie.

Jesse is standing next to fixer Mike Ehrmantraut (Jonathan Banks), who says that if he was Jesse’s age he would break ties with Walter White — who eventually kills Mike — and move to Alaska. The last frontier, a place to right past wrongs, Jesse naively says. Mike presses on that idea; he’s not sure that’s actually a possibility.

But, Mike acknowledges, it is a place for a fresh start.

And if you’ve paid attention to what Gilligan has said about where he saw Jesse eventually ending up, it’s evident that this is what he felt was a fitting end for the character. In a 2013 GQ interview, he said, “The way I see it is that he got away and got to Alaska, changed his name, and had a new life.”

“You want that for the kid,” Gilligan continued. “He deserves it.”

Through “El Camino” you that believe it, too. That’s one of the guiding strengths of the film. After all the trauma he’s experienced — not just in captivity, but under the thumb of Walt, too — you believe that Jesse deserves the second chance he gets. To answer my own question, Jesse stays sympathetic. Where Walt lost his convictions, Jesse found his. And in this fresh start, viewers find not just a fitting end for a favorite character, but a restorative one for the series as a whole.

"El Camino: A Breaking Bad Movie" is currently available to stream on Netflix.