The last time a U.S. impeachment and a U.K. prorogation were simultaneously in the news was 1710 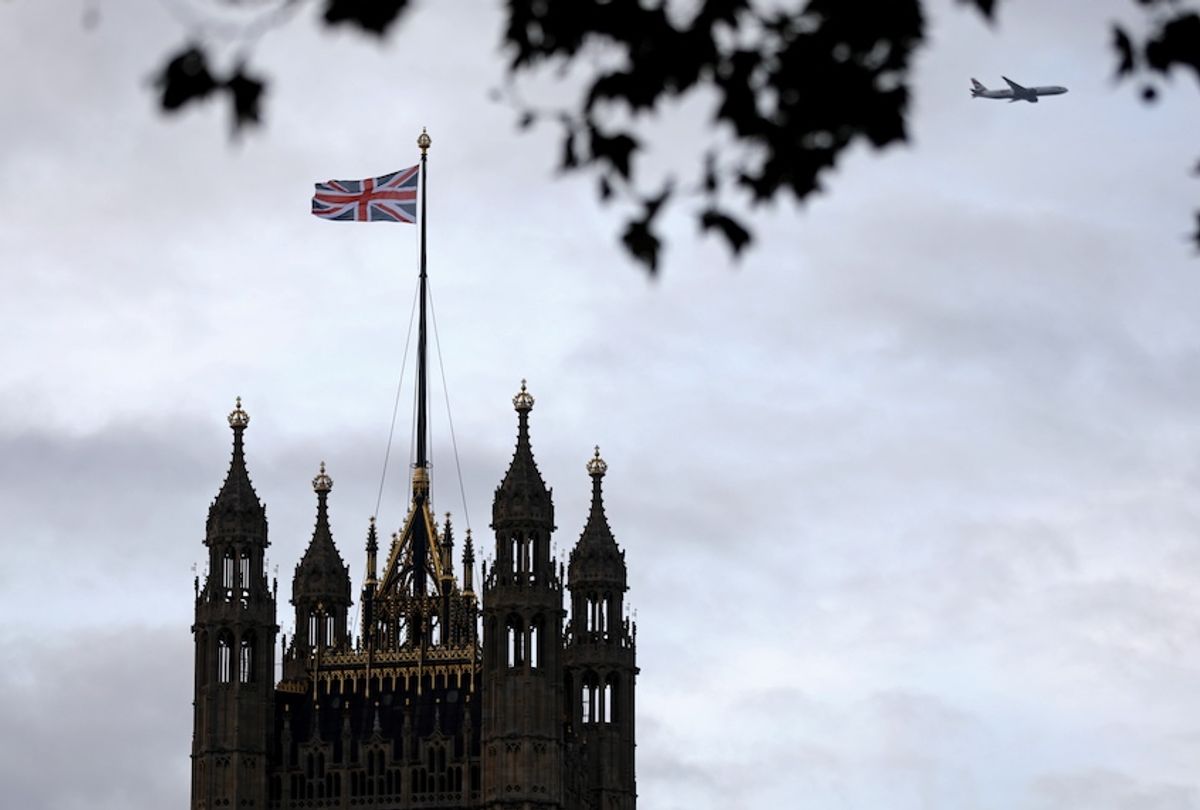 A Union flag flies from a pole atop the Victoria Tower at the Houses of Parliament in London on October 9, 2019. (Isabel Infantes/AFP via Getty Images)
--

The differences between then and now are striking. While today the two events signal overreach by two national leaders, in 1710, the impeachment trial and the prorogation of Parliament signaled restraint on the part of a monarch.

In 1710, the British Parliament brought impeachment proceedings against Dr. Henry Sacheverell, a Tory clergyman, for preaching a sermon in support of Queen Anne (who ruled Britain from 1702 to 1714).

In preaching passive obedience to the monarch, Sacheverell was in essence preaching against the principle that the monarch is not above the law. Even Queen Anne agreed that it was a “bad sermon and that he deserved well to be punished for it.”

President Trump falsely asserted in July that the Article II of the U.S. Constitution gives him the right to do whatever he wants as president. He clearly has not read the Constitution, nor does he appear to know anything about the lessons of history that caused the founding fathers to incorporate impeachment into the checks and balances of the government.

Trump invoked history recently in alluding to traditional punishment for spies and traitors, in a menacing comment directed at the officials cited by the anonymous whistle blower. But while traitors were often executed in earlier eras, history also shows monarchs who respected the rule of law.

In the seventeenth century, Parliament had made clear to both Queen Anne’s father and grandfather that monarchs of England could not ignore the law. Her grandfather, Charles I, was beheaded by Parliament for asserting “unlimited and tyrannical power” in 1649.

Anne’s father James II, was deposed by Parliament during the Glorious Revolution of 1688, when William of Orange landed on English soil with 40,000 troops, and Parliament declared Mary and William (James’s eldest daughter and son-in-law) joint monarchs. Anne, Mary’s younger sister, succeeded to the throne only after their deaths.

What Donald Trump seems not to understand is that the founding fathers incorporated impeachment into the Constitution in order to avoid such violent methods of removal as assassination, legal execution or invasion by a foreign power.

As Benjamin Franklin observed during the 1787 Constitutional convention, impeachment would be a better option than previous methods available “in cases where the chief Magistrate rendered himself obnoxious.”

Impeachment is a tactic adapted from British history but no longer part of British law. Moreover, when it was legal, impeachment was never used against monarchs. It was used against government officials “to express disapproval of royal policies,” according to Lawrence Tribe and Joshua Matz.

The Supreme Court steps in

With impeachment no longer an option, the UK Supreme Court last month used its judicial power to halt Boris Johnson’s overreach in advising the current Queen to prorogue Parliament for several weeks, thereby limiting debate before the mandated October 31st exit from Europe.

Lady Hale, President of the Supreme Court, announced that Johnson’s “decision to advise Her Majesty to prorogue Parliament was unlawful.”

In 1710, monarchs could act on their own volition (without a prime minister’s advice), and Queen Anne chose to prorogue Parliament in April, just after the end of the impeachment trial against Sacheverell.

In 1710, Queen Anne was resisting advisors who were pressing her not merely to suspend but to dissolve Parliament and call new elections. She saw that the country was deeply divided against those who were for or against impeaching Sacheverell, and she was cautious about calling new elections under such tense and divided political conditions.

The impeachment trial against Sacheverell had backfired spectacularly. There was a groundswell of sympathy across the country for the “fair” preacher, a clergyman in the Church of England.

While the House of Lords voted to impeach, the punished imposed was so lenient (a ban on preaching sermons for three years) that Sacheverell himself felt exonerated.

Moreover, the trial had provoked mob uprisings against the Whigs who had led the impeachment, and these uprisings also brought violence to religious Dissenters, i.e. Presbyterians and other Protestants not members of the Church of England — who were often wealthy merchants and Whigs.

Presbyterian meeting houses were systematically dismantled, their pews and pulpits set ablaze in bonfires during the course of the impeachment trial.

In all of this tumult, the Queen made the nation a priority over self: On one night of escalating riots in March, she commanded her own foot and horse guards be dispatched from the palace to help control the rioters, asserting that when left without protection herself, “God would be her Guard.”

Although she merely prorogued Parliament in April, Anne did eventually dissolve it and called new elections in September 1710. The Whigs lost spectacularly, with the Tories winning a majority of almost 2 to 1 in the House of Commons, but Anne would have preferred a more balanced sharing of power between the parties.

Rather than stirring up divisions between parties for her own political gain, she sought what was best for the nation, offering a lesson in selfless leadership to contemporary heads of state.