"Succession" ends its second season with a killer instinct 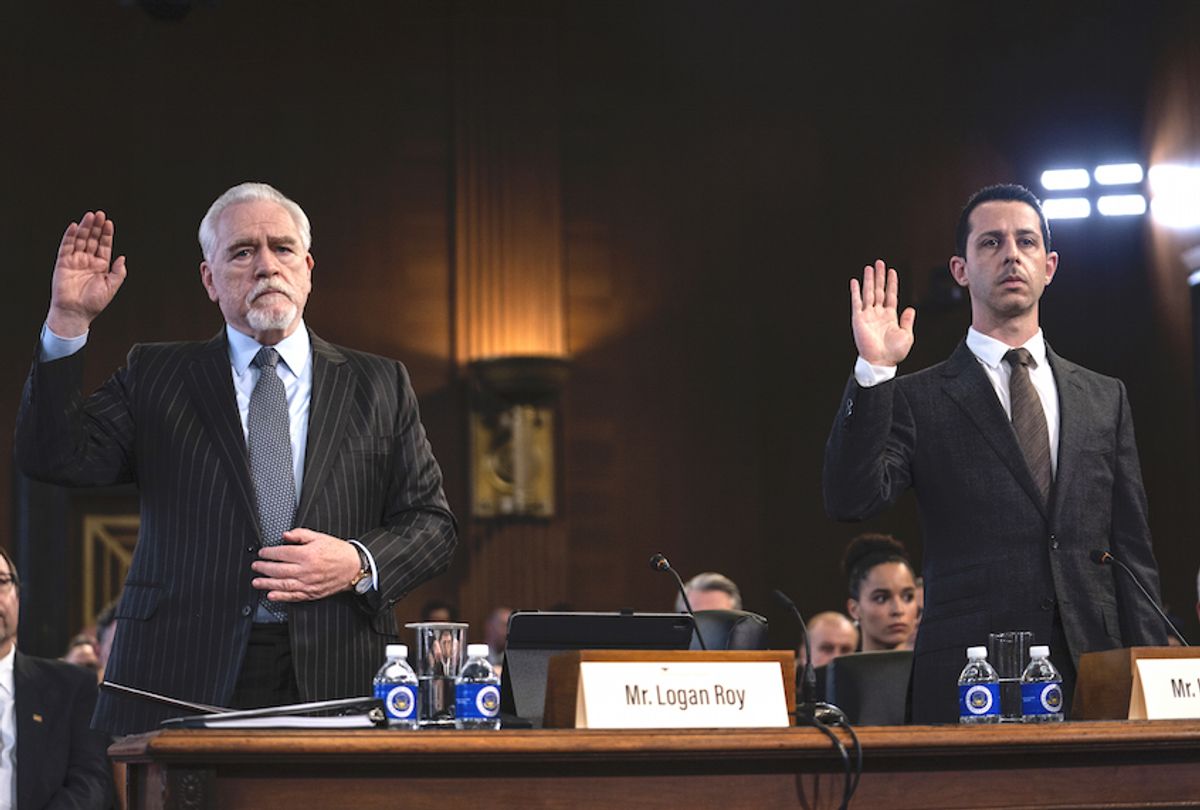 The following contains spoilers from the Season 2 finale of "Succession."

Broken things are not necessarily neutralized, rendered passive, and easily discarded. Many become more dangerous than before – lethal, even. Logan Roy (Brian Cox) learns this about his son Kendall (Jeremy Strong) the hard way in the Season 2 finale of "Succession," symbolically titled "This Is Not For Tears. " The title comes from a poem by John Berryman called "Dream Song 29," and includes this telling stanza:

But never did Henry, as he thought he did,
end anyone and hacks her body up
and hide the pieces, where they may be found.
He knows: he went over everyone, & nobody's missing.
Often he reckons, in the dawn, them up.
Nobody is ever missing.

"Succession" follows a family fond of doing emotional violence to one another and to those closest to them, and often these abusive acts manifest at parties. The second season's most famous shindig takes place in Episode 3, during a European hunting vacation that degrades into a paranoid Logan forcing suspected traitors to crawl for his amusement — the famous "boar on the floor" scene.  This is the kind of psychological battery he reserves for employees and allies suspected of failing him.

Family has it much worse.

Following months of subjecting his one-time favorite scion to one humiliation after another in the name of bringing him to heel, Logan believes Kendall is thoroughly crushed, submissive, and ready take a bullet for his father.

Outwardly Kendall validates this thought. Most of the second season shows him riding out a harsh marathon of penance imposed by Logan.

But Logan is the worst strain of bastard, a twisted paterfamilias who enjoys turning family bonding sessions into dogfights purely for his own amusement. There is no means of receiving forgiveness from such a tyrant. Nor could Kendall, his ambitious sister Shiv (Sarah Snook) or his perfidious brother Roman (Kieran Culkin), earn any affection or validation from the man.

The sad part is, they on keep trying despite the fact that Logan takes pleasure in toying with all of his children's emotions. At first it seems that this is presumably his rough way of testing their fitness to take over his global media conglomerate Waystar Royco. Earlier this season he dangles the possibility before Shiv, secretly, only to prod her into embarrassing herself out of the running at a family business dinner.

He pushes Roman, the ruthless troublemaker, into chasing down a last-ditch investment opportunity in Turkey, placing him in what quickly turns into a deadly hostage situation. Neither of those betrayals matches what Logan does when Waystar Royco's shareholders, eager to rid themselves of a toxic scandal, suggest that only Logan stepping down and accepting responsibility would appease them.

A plot that begins with the family doing everything it can to stave off a takeover takes a left turn midway through the season: A whistle-blower provides a magazine with dirt on all kinds of misconduct on Waystar cruises, including cover-ups of sexual assaults, passengers going overboard, and a few unexplained deaths.

Unsurprisingly, we found out that the media king would his eat own child to save himself — a "blood sacrifice," as he tells Shiv. Out of the three children Logan's spent 10 episodes tenderizing for slaughter, certainly Kendall – the son at the helm of a failed coup and one with a manslaughter stain hanging over his head – seemed like the ripest, easiest eating. And in another insult to Shiv, during a family cruise where Logan's children and inner circle backstabbed one another during various family meals in an effort to survive, everyone agrees that Shiv isn't important enough to offer up to the hounds.

Instead Logan decides it is Kendall who will take the fall for the Roys, but really for his father.

When Kendall, seeming to agree, asks his father if he thought he could have been a worthy successor his father gently, viciously tells his son, "You're not a killer. You have to be a killer."

It is then that Kendall, bowed so very low, solidly plants a kiss on his father's cheek. That's no act of filial piety; that was the surest sign that he was planning to go for the old man's throat – as anyone who has seen a mafia film can attest.

In its second season, "Succession" transformed from a King Lear-ish story into one about a family a shade or two removed from being the Murdochs or the Trumps, only with a tad more Corleone in their DNA. The Roy children probably aren't as strategic as Lachlan Murdoch, but they're more compelling to watch than Eric, Don Jr., and Ivanka Trump, and about 10 times smarter.

Series creator and showrunner Jesse Armstrong, who wrote the finale and the equally stunning penultimate episode of this season, "D.C.," earns every howl and cringe his dialogue and twists yield in those season-ending hours.

Performances from every member of the cast fuels "Succession's" elevation from glamorous cringe work into an unmissable weekly traumedy — Cox could be equally impish and downright frightening as Logan, while both Snook and Culkin shone bright together and separately as they fleshed out Shiv and Roman, each of them devious and prone to trip over their own egos. Holly Hunter's Rhea Jarrell is a gift to Season 2 and to Logan, as an ambitious, strategic executive  not bound to any family or person and therefore able to evaluate everyone with unerring truth. This saves her from disgrace, but not the Roys.

And for a while it appeared that Matthew Macfadyen's likable idiot Tom Wambsgans, or dumbo cousin Greg (Nicholas Braun), or even Connor, the talent-free dilettante of an oldest son (Alan Ruck) would be the one to take the fall Logan's sins. After all, men like Logan stay in power because they have other men taking the fall for them.

"Game of Thrones" won the Emmy for best drama this year, but when all is said and done, "Succession" is the show truest to the spirit of 2019. "Succession"  positively ripples with so much betrayal as to turn the act of throwing loved ones and associates under buses into an art form. Logan doesn't sully his hands with it – reminiscent of another selfish despot with too much power and no emotional connection to his children – leaving the dirty work to his kids and allies such as General Counsel and Roman's mommy-dom Gerri Killman (J. Smith-Cameron) or Frank Vernon (Peter Friedman).

The incredible pettiness and cruelty the Roys inflict on one another and the confidantes in Logan's inner circle are a potent draw, but the uncanny relevance in the whistle-blower storyline and the familiar level of stupidity in the congressional testimony by friends and family members became something of a release valve.

It's not because we can't get enough of that sort of business. Rather, it's because the show gives us some answer as to how the terrible corporate and political toadies in those congressional hot seats became the awful people that they are. In the real world, we may sometimes ask ourselves why the people who carry water for horrible, corrupt leaders continue to do so; in "Succession" we see how low the price of loyalty to terrible people can be. Basically the Roys' enablers are in it for the parties, access to inflatable slides off the sides of yachts, and the contact high off of their power.

"Succession" brims with lots of these stunning, absurdly hysterical moments illustrating the callousness of the rich and how little they think of anyone that doesn't breathe the same very rare air as they. It also reminds us, regularly, that as entertaining as these characters are, they're not good people and we shouldn't desire to be like them. Smartly the finale includes a callback to the cruelest phrase to emerge from the Waystar cruise scandal: No Real Person Involved, a term used to describe foreign workers or migrants whose stories were buried in the mess of it. It's all so nuts. And it feels just about right.

How strange it is, then, to be left rooting for Kendall, the drug-addled son who played the part of his father's loyal, soulless errand mutt and seems resigned to be shattered, who allows his father to separate him from a chance to heal, and to have budding romance with a woman who might actually be good for him, save for the drug binges.

In the finale's closing moments, as Kendall reverts back into the shark he used to be, Strong underlines every note of praise he's gotten for his performance since the table-setting first season. Armstrong writes some of the lowest moments in the show for Strong, but to take a character who, at one point, literally wakes up in a bed crusted with his own feces and transform him at the end of the season into a vengeful phoenix seemingly in the space of minutes takes finesse and a gutsy talent.

And Kendall's one-minute-to-midnight turn against his father isn't just brilliant because of the war it sets up for Season 3 of "Succession," but because of the swagger with which Armstrong announces in the tiny details that his show is the next inheritor to HBO greatness.

In outsourcing his willingness to swing the sword, to paraphrase another doomed ruler, Logan leaves himself vulnerable to dethroning — not by outsiders, but by the nearest who fear and loathe him most. In camouflaging himself in shame and biding his time, Kendall is able to deal his father a deadlier blow than any he cooked up in the first season.

That final frame shows dear old dad watching Kendall on live TV as he turns on his old man, telling reporters that his father wanted him to take the fall for the cruise and, more than this, letting the press know he has all the receipts that prove how extensively Logan has corrupted his media empire.

The second oldest Roy might not have read Shakespeare, but he's obviously a premium cable fan and familiar with the adage, "You come at the king, you best not miss." Slowly, almost warmly, his old man smiles — proud, for once, to have raised another killer.