Rep. Tulsi Gabbard and Tom Steyer took the stage after failing to qualify in the last round. How did they perform? 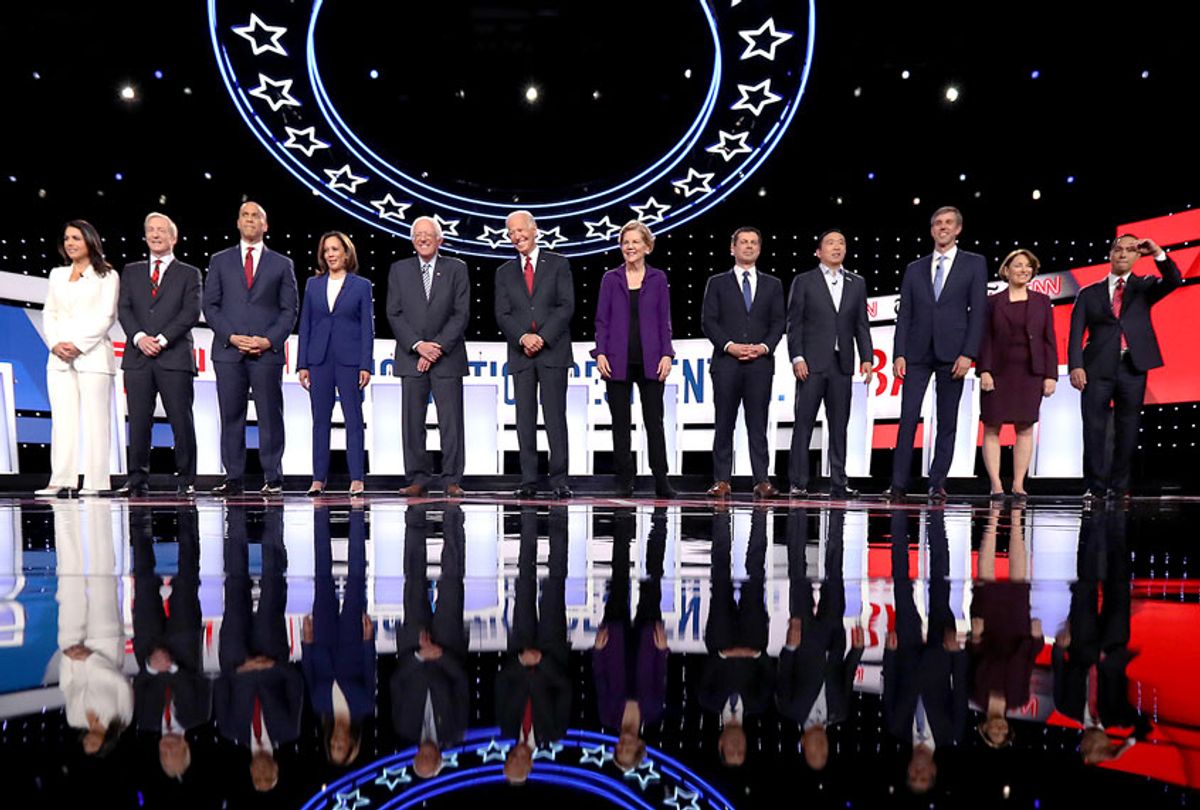 Twelve Democrats took to the stage Tuesday night for yet another debate in the party’s 2020 president primary hosted by CNN and the New York Times.

After only ten candidates qualified for the previous debate, an additional two — Hawaii Rep. Tulsi Gabbard and wealthy donor and former hedge fund manager Tom Steyer — made it to the stage this round for an even more crowded event.

The candidates discussed a range of important policy issues, but since the format was a debate, and they’re all competing for the same nomination, it is ultimately most critical who won and who lost the night. Here are three winners and four losers — necessarily a subjective assessment, of course — from the debate:

Elizabeth Warren — As Warren has sharply risen in the polls, her rivals clearly perceived her as the one to beat Tuesday night — despite former Vice President Joe Biden’s own strength among voters. And for the first night in which she was viewed as a frontrunner, Warren took many hits and criticisms, and not just about “Medicare for All.” At points early in the debate, these attacks seemed to catch her off guard, and she spent a fair amount of time on the defensive. But this also meant she got a lot of screen time — likely the most of any candidate — and she stood out. And as the debate continued on, she became more sure-footed, displayed her broad policy knowledge, and culminated in a memorable moment in which she touted her own success establishing the Consumer Financial Protection Bureau. She even pointedly suggested that former President Barack Obama was key to getting the legislation passed, rather than Biden, as he claimed. And though she came under fire, her opponents’ attacks served to elevate her at least as much as they damaged her.

She also had a powerful response when asked if she would be able to take on the sitting president, given her age: “I will outwork, out-organize, and outlast anyone — Donald Trump, Mike Pence or whoever the Republicans get stuck with.”

Bernie Sanders — The Vermont senator had a lot to prove in this debate. Having recently suffered a heart attack at age 78, his performance was under close scrutiny. But despite these worries, Sanders gave a strong and confident performance. And when the moderators moved to turn the conversation to the candidates’ health statuses, he ably cracked a joke to defuse the tension. And, it should be said, despite his recent health struggle, he came off stronger and more capable than Biden, who is two years younger.

And when Biden attacked Sanders’ and Warren’s plan for Medicare for All as “vague campaigns,” the Vermont senator forcefully hit back — saying that the vice president “also got done” the Iraq War, NAFTA, and a bankruptcy bill that, Sanders said, hurt American families.

Julián Castro — Many of the lower-polling candidates not in the top three had stand out moments during the debate. But among them, in my view, Castro stood at more than others, particularly for two impactful moments. During an emotional discussion about gun control, Castro skillfully and powerfully brought up the persistent problem of police violence and shootings as a central issue, mentioning the recent devastating killing of Atatiana Jefferson. And at another point in the debate about Trump’s abandoning of the Kurds in northern Syria, he skillfully drew a stark contrast with the president’s brutal immigration policies, asking viewers “to think about how absurd it is that this president is caging kids on the border and effectively letting ISIS prisoners run free.”

Donald Trump — The night opened with moderator Anderson Cooper asking each candidate about the prospect of impeaching Trump. While once upon a time, the subject of impeachment split the Democrats, the night showed that the party is now united behind the idea. Each candidate was given an opportunity to deliver a litany of Trump’s crimes and violations and stand up for law in order in the country in opposition to a lawless president. In some of the previous debates, the president has gone largely unmentioned — but his failings were placed front and center on Tuesday.

Tulsi Gabbard — Gabbard predictably took the least aggressive stance in response to the impeachment question, reiterating that she has only recently come around to supporting the inquiry because of the Ukraine scandal. But she also needlessly warned that impeachment would be divisive — as if that were the Democrats’ fault, rather than Trump’s — and insisted that Trump was elected fairly in 2016, a dubiously claim in on its own. She didn’t even sound confident that she would, in the end, vote for impeachment as a member of Congress — let alone support the Senate removing the president. It was a bizarre look for a person running to be the Democratic presidential nominee.

She later gave an awkward and confusing defense of her foreign policy views, repeatedly and robotically using the phrase “regime-change war” to describe U.S. efforts in Syria.

Tom Steyer — The businessman who essentially bought his way on to the 2020 Democratic debate stage had a pretty poor showing for his first time appearing with his fellow candidates. He repeatedly insisted that government, as it stands, is too corrupted to serve the American people well — but he never explained why his being elected president would change that. He was unable to give a convincing explanation of why he was better or different than his opponents. And though he was willing to say the billionaires like himself should be more taxed more, he also oddly seemed to imply later that, as a businessman, he was best-suited to take on Trump with regard to economic issues — an unpersuasive claim, and one that is unlikely to get him far in a Democratic primary.

The Democratic National Committee— Somehow, the DNC’s rules for the fall debates resulted in more candidates on Tuesday’s debate stage than the previous debate. Having ten candidates onstage in September was unwieldy enough — having 12 now was a complete mess. It seems much more natural and sensible for debates later in the primaries to have fewer candidates, rather than more. The fact that the DNC’s rules ended up with the opposite result was baffling.