Rivals for the Democratic nomination singled out Warren, who has been rising in polls, as evasive on health care 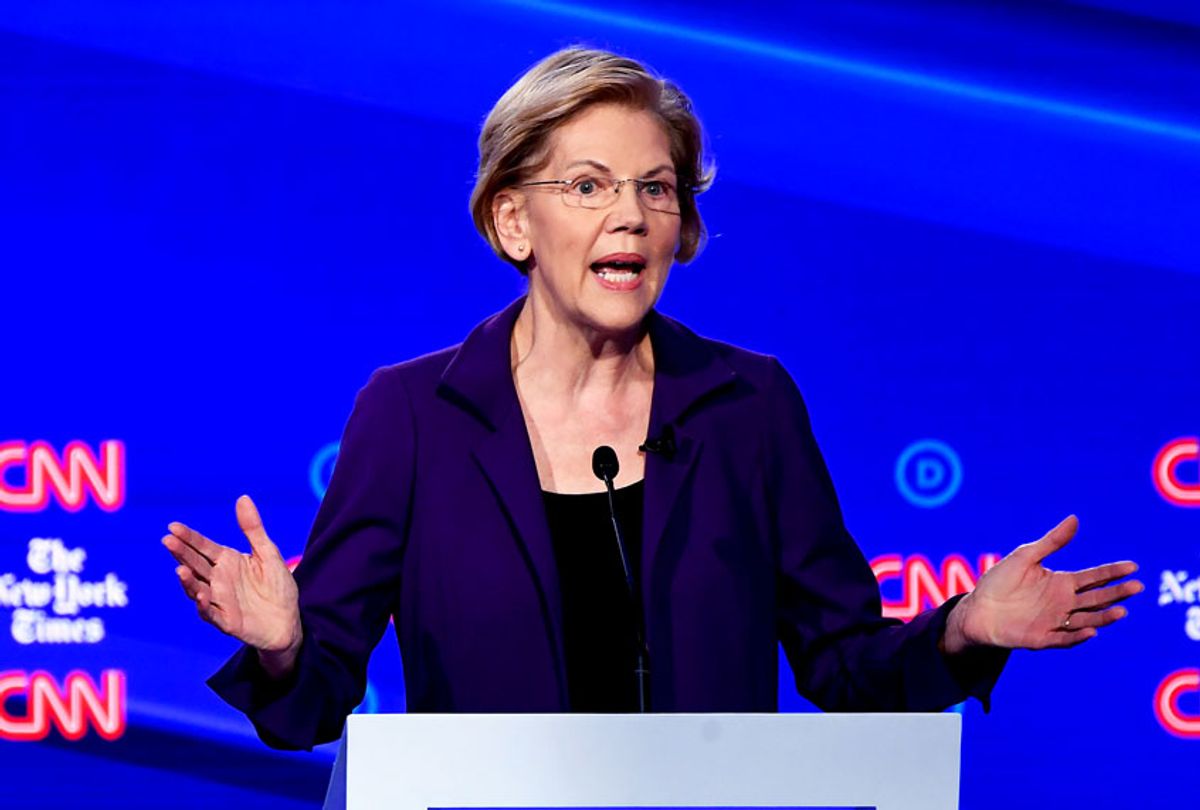 Sen. Elizabeth Warren, D-Mass., on Tuesday night fielded attacks from several of her rivals for the Democratic presidential nomination over her refusal to explain how she would fund her health care plan, "Medicare for All."

While the differences among Democratic candidates over how to reach universal health coverage have been on display in all of the party's previous primary debates, Warren, who made her debut Tuesday night as the frontrunner, was singled out by other candidates as evasive on the issue.

Despite the pressure, Warren dodged questions over whether her single-payer plan would raise taxes on the middle-class or what it would look like for the 160 million Americans who currently get coverage from their employer.

"So I have made clear what my principles are here, and that costs will go up for the wealthy and for big corporations," Warren claimed. "And for hard-working middle-class families, costs will go down."

South Bend, Ind., Mayor Pete Buttigieg, who has clashed in the past with Warren over health care policy, went after the senator for not having a detailed plan about how she would finance Medicare for All.

"Well, we heard it here tonight: A 'yes or no' question that didn't get a 'yes or no' response," Buttigieg said. "This is why people here in the Midwest are so frustrated with Washington in general and Capitol Hill in particular."

"Your signature, senator, is to have a plan for everything — except this," he continued. "No plan has been laid out to explain how a multi-trillion-dollar hole in this Medicare for All plan that Senator Warren is putting forward is supposed to get filled in."

Even Sen. Bernie Sanders, I-Vt., the fellow progressive candidate Warren has most closely aligned with on Medicare for All, took a subtle shot.

"I do think it's appropriate to acknowledge taxes will go up," Sanders said. "They will go up significantly for the wealthy."

Sen. Amy Klobuchar, D-Minn., suggested that Waren was not being "honest" in how she discusses her health care plan.

"At least Bernie's being honest here and saying how he's going to pay for this and that taxes are going to go up," Klobuchar said. "And I'm sorry, Elizabeth, but you have not said that, and  I think we owe it to the American people to tell them where we're going to send the invoice."

Questions surrounding health care policy have exposed generational and ideological splits among the Democratic presidential field since the start of the primary contest. As in past debates, the same could be seen Tuesday night as candidates appeared eager to differentiate themselves on exactly how they would expand health care coverage to the uninsured and improve coverage for more Americans. But this time, the candidates appeared to have more clearly-defined positions on how to revamp the nation's health care system.

Warren and Sanders again called for a complete overhaul of the system with their plans to expand Medicare to every American, while Buttigieg, Klobuchar, former Texas Rep. Beto O'Rourke and former Vice President Joe Biden served up more moderate proposals, which would gradually build on the public-private model of coverage that is currently in place.

While Warren avoided answering whether her plan would result in a tax hike, Sanders acknowledged he would raise taxes on the middle-class. However, he argued that any tax hike would be offset by savings in out-of-pocket health care expenditures.

"At the end of the day, the overwhelming majority of people will save money on their health care bills. But I do think it is appropriate to acknowledge that taxes will go up," Sanders said. "They're going to go up significantly for the wealthy. And for virtually everybody, the tax increase they pay will be substantially less — substantially less than what they were paying for premiums and out-of-pocket expansions."

Warren, meanwhile, directed the conversation to medical debt and bankruptcy, saying she has heard from people with multiple sclerosis, diabetes and cancer about the costs they incurred.

"They all had great health insurance right at the beginning," Warren said. "But then they found out when they really needed it — when the costs went up — that the insurance company pulled the rug out from underneath them and they were left with nothing."

Sen. Kamala Harris, D-Calif., has proposed a version of Medicare for All that would let private insurers offer competing plans. Buttigieg has emphasized "Medicare for All Who Want It," a plan which would keep employer-sponsored and individual private insurance in place but allows anyone to buy into Medicare. Biden has expressed support for expanding Obamacare by implementing a government-sponsored insurance option sold through the Affordable Care Act marketplaces.

Biden again touted his plan to expand the ACA on Tuesday night and criticized proposals which would overhaul the entire system. As he had done in previous debates, he attacked Medicare for All, alleging that it would raise taxes by about $5,000 a year for people making in between $50,000 and $75,000.

"On the single most important thing facing the American public, I think it's awfully important to be straightforward with them," Biden said. "The plan is going to cost at least $30 trillion over 10 years. That is more on a yearly basis than the entire federal budget." (Notably, the "at least $30 trillion" comes from a study by the Mercatus Center at George Mason University. It written by Charles Blahous, a former official in President George W. Bush's administration, who also concluded the Sanders plan would save Americans $2 trillion over time.)