Trump "ambushed" parents of dead U.K. teen by surprising them with their son's killer

Harry Dunn's parents thought they were meeting Trump to ask for justice. Apparently he just wanted a photo op 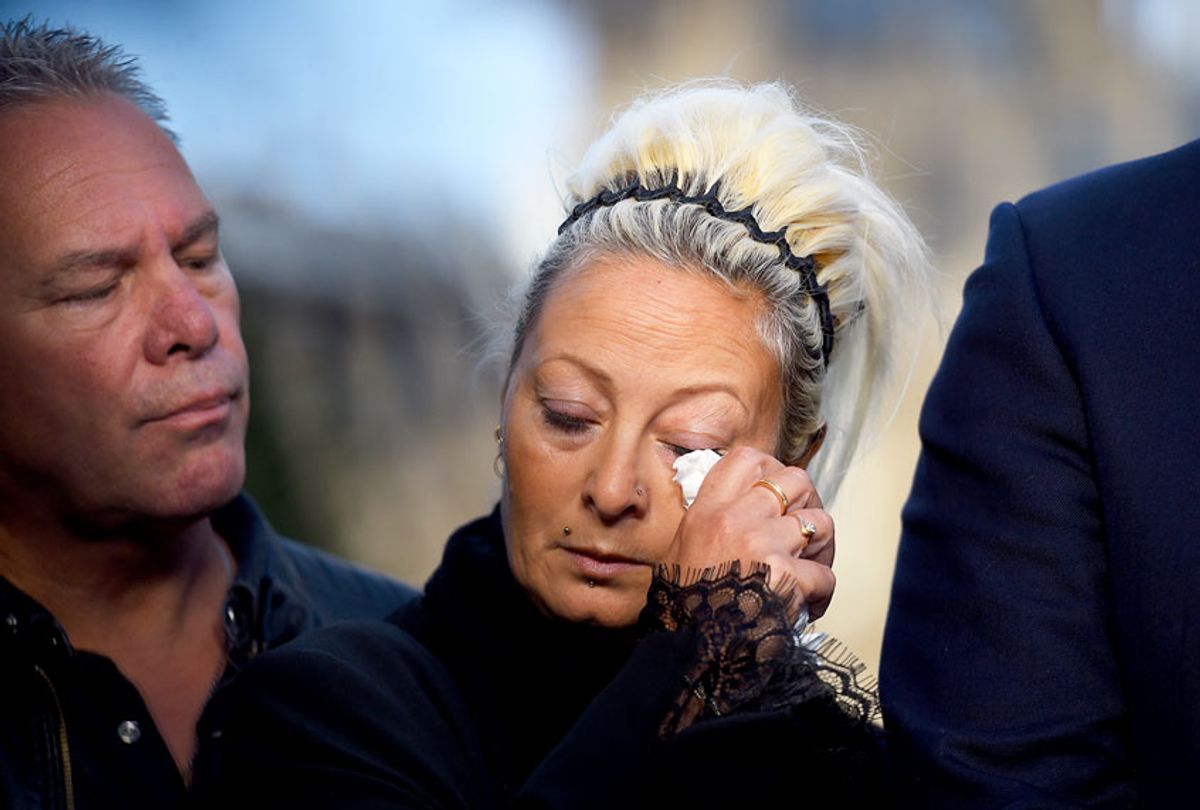 Mother of Harry Dunn, Charlotte Charles speaks to the media after meeting with Foreign Secretary Dominic Raab on October 9, 2019 in London, England. Motorcyclist Harry Dunn, 19, died in a collision with a car in Northamptonshire on August 27th. Anne Sacoolas, the wife of a US diplomat, was named as a suspect in the crash but later left the UK despite telling police she had no such plans. (Peter Summers/Getty Images)
--

The parents of a British teen killed in a traffic accident involving an American diplomat’s wife were “ambushed” by President Trump when he told them she was in the next room, a spokesman for the family said.

On Tuesday, the parents of 19-year-old Harry Dunn met with Trump at the White House. Dunn was killed in a crash in August involving Anne Sacoolas, the wife of a U.S. diplomat stationed in the U.K. British police said that Sacoolas claimed diplomatic immunity after the crash and returned to the United States three weeks later.

Dunn’s parents flew to the U.S. to argue that Sacoolas should be returned to Britain to face justice. Trump had other ideas.

The family was surprised to be invited to the White House and to meet with the president, family spokesman Radd Seiger told The Daily Beast. But they felt “ambushed” when Trump dropped the “bombshell” that Sacoolas was right next door. Trump repeatedly asked the family to meet with Sacoolas, in a scene that would be captured by a pool of photographers that the White House had assembled for the meeting.

Dunn’s father, Tim, told CBS News that he was stunned when the president made the request.

"He did ask two or three times," he said. "It was a bit pressure, but we stuck to our guns."

Dunn’s mother, Charlotte Charles, said it was the “wrong setting” for such a meeting.

Charles said they had no prior warning about the circumstances of their meeting.

"To be thrown into a room together with no prior warning, that's not good for her mental health, it's certainly not good for ours. … You know, none of us know how we were going to react to have that sprung on us," she said.

Seiger wrote on the Justice4Harry GoFundMe page that the family blamed National Security Adviser Robert O’Brien for the circumstances.

“It struck us that this meeting was hastily arranged by nincompoops on the run and in particular Mr. O’Brien, who appeared to be extremely uptight and aggressive and did not come across at all well in this meeting which required careful handling and sensitivity,” Seiger wrote. “The family remain open to the possibility of meeting Mrs. Sacoolas one day in the future but in a neutral and appropriately controlled environment.”

When it came to the family’s actual request, Trump was less responsive, the family said. Tim Dunn told CBS News he planned to meet the president “man to man, father to father,” to plead for Sacoolas to be returned to Britain. Instead, the family came away believing Trump just wanted a photo op.

"Reflecting on it this morning, I think Charlotte and Tim realize that the president was only doing it for himself,” Seiger told CNN.

The family said Trump did not say he would return Sacoolas to the U.K. Though diplomats and family members are typically immune from prosecution in their host country, British Foreign Secretary Dominic Raab said in a letter to Dunn’s family that Sacoolas' diplomatic immunity was “no longer pertinent,” CNN reported.

"We have pressed strongly for a waiver of immunity, so that justice can be done... Whilst the US government has steadfastly declined to give that waiver, that is not the end of the matter," Raab wrote. “The UK government's position is that immunity, and therefore any question of waiver, is no longer relevant in Mrs. Sacoolas' case, because she has returned home.”

Sacoolas initially cooperated with the investigation into Dunn’s death but then returned to the U.S. despite assuring police that she would remain in the U.K.

Her attorney released a statement Tuesday expressing remorse for the accident.

"Anne was driving on the wrong side of the road and is terribly, terribly sorry for that tragic mistake,” the statement said. “Neither she nor Harry Dunn's family will ever be the same because of it. She wants to meet with the family to apologize and take responsibility."

Trump told reporters on Wednesday that he arranged the meeting at the request of British Prime Minister Boris Johnson. Trump described the meeting to reporters as “beautiful in a certain way.”

He admitted that he tried to get the family to meet with Sacoolas.

“I offered to bring the person in question in,” he said. “And they weren’t ready for it.”

But Trump went on to defend Sacoolas while discussing Dunn’s death.

“That happens in Europe,” he said. “You go to Europe and the road’s the opposite. It’s very tough if you’re from the United States…. That happens to a lot of people, by the way.”

For the president to cite "Europe" is misleading, to say the least. In fact, the U.K and Ireland are the only major European nations where vehicles drive on the left side of the road.