The Trump murder video is no joke: It's an encouragement to ramp up the violence

Of course the president's allies dismiss this vision of mayhem as satire. But it has a clear and chilling purpose 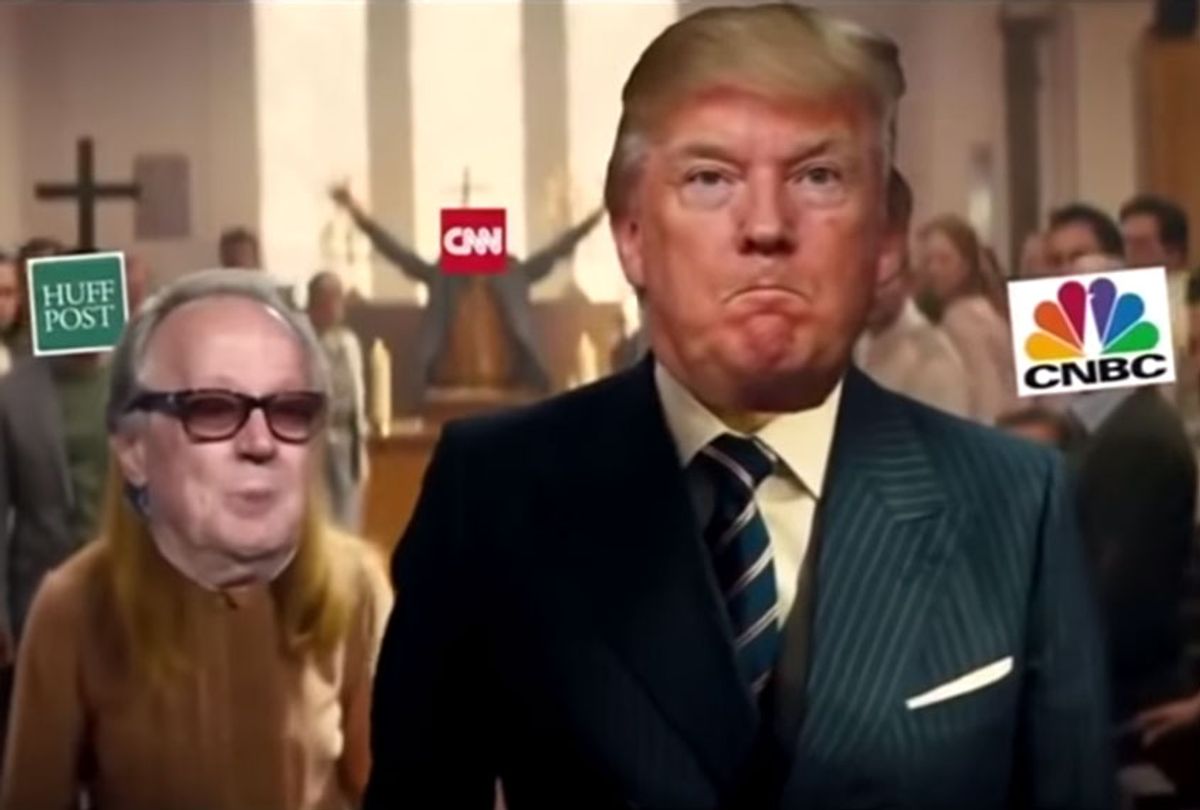 Donald Trump is not a “friendly fascist.” Unlike Ronald Reagan, the prototype for that concept, Trump does not pretend to be harmless. He does not offer up fake smiles and a cheerful nature, or display empathy and human concern for others, feigned or otherwise.

Donald Trump is direct, obvious and public in his threats against democracy, the Constitution and the rule of law. Trump and his movement are working to destroy America’s multiracial democracy through appeals to a mythic past that will “Make America Great Again.” In practice this means undoing all the social progress and democratic reforms of the last century or more and returning to a society where white people — rich white male Christians, in particular — are fully in control over all aspects of American society for all time.

And of course, Donald Trump — the not-so-friendly fascist — embraces violence as a means of achieving his goals. When Trump said famously during the 2016 presidential campaign that he could shoot someone in the middle of Fifth Avenue without losing his voters, it was both a threat and a promise.

“Friendly fascism” and traditional fascism are more alike than they are different. Writing in his 1980 book “Friendly Fascism: The New Face of Power in America” Bertram Gross explained this:

In each, a powerful oligarchy operates outside of, as well as through, the state. Each subverts constitutional government. Each suppresses rising demands for wider participation in decision making, the enforcement and enlargement of human rights, and genuine democracy. Each uses informational control and ideological flimflam to get lower and middle-class support for plans to expand the capital and power of the oligarchy and provide suitable rewards for political, professional, scientific, and cultural supporters.

A major difference is that under friendly fascism Big Government would do less pillaging of, and more pillaging for, Big Business.

It is true that both Trump and Reagan are TV presidents: products of the worst aspects of American popular culture and its superficiality, the emphasis on the impulsive versus the meditative and contemplative. It is also true that the results of Trump’s and Reagan’s policies for the poor, the working class, the vulnerable and other marginalized groups are very similar. And it is true that Trumpism is like the venerable right-wing lie about “trickle-down economics,” dosed on meth, crack and steroids.

But in at least one very important way Donald Trump is most certainly not like Ronald Reagan. Cultural critic James Poniewozik explores this in his new book “Audience of One: Donald Trump, Television, and the Fracturing of America":

[T]he differences between Reagan and Trump were as important as their similarities. Reagan was an actor; Trump was a reality-TV star. Reagan came from the world of fiction; Trump came from nonfiction-based entertainment. Reagan played characters; Trump played an amplified version of himself. Reagan’s job was acting; Trump’s job was acting out.

Reagan’s preparation for being president, in other words, was years of imagining himself in the heads of other people …. Reality TV did not require you to do that. You needed to understand other people as obstacles, or as creatures who would react to stimuli, but not necessarily as full human beings with the same complexities as you. If anything, too much empathy was a liability. It was noise that kept you from being your fullest you …. This is a frightening attribute for a person who has power and responsibility for others.

Trump's performance is seductive and beguiling for his audience. They don't want friendly fascism — it does not satisfy their emotional needs. Trumpists want and need a “strongman,” a bully and political thug who “doesn’t take any crap.” This is projection and wish-fulfillment; Trump is their hero and an imagined cure for their own emotional ailments. In that way, Donald Trump the political cult leader is poison medicine for his followers.

Trump's supporters are bound to him by violence, both real and imagined. This was shown yet again through the fantasy mass murder video that was shown last weekend at an event hosted by the pro-Trump group American Priority at the president’s resort in Miami. In the video, an edited scene from the 2014 movie “Kingsman: The Secret Service,” an imaginary Trump guns down numerous symbolic figures: Democratic politicians, the news media, the Black Lives Matter movement, and other perceived enemies. Donald Trump Jr. and former White House press secretary Sarah Huckabee Sanders were featured speakers at the American Priority conference.

Such fantasies of political violence are a defining feature of fascism and a sign of a failing democracy.

That video was shown at the American Priority conference as part of a presentation on political memes. A meme is a message that circulates rapidly, in uncontrolled fashion, with the goal of changing how its targets think and behave. As such, the goal of the Trump mass-murder video is to encourage Trump supporters to support violence (literal or otherwise) against the president’s adversaries.

Trump himself has also shared videos and other messages on Twitter that encourage violence against the news media if they do not do his bidding.

Moreover, because violence is a core strategy and tactic of authoritarian leadership, he has suggested that Hillary Clinton, Joe Biden and other leading Democrats — as well, again, members of the news media who dare to criticize him — should be executed for treason.

Trump is a racial authoritarian. Racism is a form of violence.

Trump and his allies obsessively direct their violent threats and other attacks against nonwhite people as a group — notably, but not exclusively, nonwhite immigrants and migrants from Latin and South America. Trump has focused many of his most toxic attacks on prominent nonwhite Democratic elected officials such as Maxine Waters, Elijah Cummings, Ilhan Omar, Alexandria Ocasio-Cortez, Ayanna Pressley and Rashida Tlaib, all duly elected members of Congress.

Donald Trump, the Republican Party, conservatives and their media allies are masters of stochastic terrorism. This has resulted in lethal political violence in the form of mass shootings, white supremacist riots and attacks, bombings, and hundreds of other documented hate crimes and other attacks by Trump’s supporters and those others who share his beliefs, across the United States and the world.

Predictably, Trump and his enablers have officially “condemned” the (most recent) Trump mass murder video. This supposed “condemnation” is a function of the plausible deniability which is a feature of stochastic terrorism. Trump’s defenders, including the hosts of the American Priority event, claim that the video is a “parody” and a “joke.” So-called humor has long been a way of encouraging violence against perceived enemy groups, because it dehumanizes the targeted individuals and groups in a supposedly harmless context, lowering the social inhibitions on committing violence against them.

Of course, there is the hypocrisy, which is always at the heart of fascism and authoritarianism.

Comedian Kathy Griffin was pilloried by conservatives when in 2017 she posed with a fake severed head of Donald Trump.

Republicans and other gun obsessives constantly claim that video games and other violent forms of popular culture lead to mass shootings. Yet somehow a video showing the president of the United States slaughtering his “enemies” is harmless fun.

If Barack Obama or Hillary Clinton, as president, were featured in such a video at an event hosted by their supporters, at a property either of them owned, the right-wing news media would create an enormous public panic that might well end with their impeachment and removal from office.

Ultimately, the Donald Trump murder video is but another example of how fascism has been normalized in America. In total, Trump’s presidency has unleashed, encouraged, spawned and permitted a long, nasty smear of political scatology across American politics and American life.

It's true that the Democrats and other decent Americans have finally become mobilized to remove Trump, either through impeachment or the ballot box. But we must not overlook the fact that Trump and his movement’s rise to power is both a problem in itself and also a symptom of a much deeper set of political and social crises.

What we are witnessing in the Age of Trump is a behemoth of broken democracy and governance in a society that has become much too rapidly accustomed to a state of malignant normality and moral inversion.

In his brilliant book “Democracy Incorporated: Managed Democracy and the Specter of Inverted Totalitarianism,” political theorist Sheldon Wolin signaled to the rise of Trump and how that regime would wield power:

Antidemocracy, executive predominance, and elite rule are basic elements of inverted totalitarianism. Antidemocracy does not take the form of overt attacks upon the idea of government by the people. Instead, politically it means encouraging what I have earlier dubbed “civic demobilization,” conditioning an electorate to being aroused for a brief spell, controlling its attention span, and then encouraging distraction or apathy.

There will be (more) blood.

The Trump murder video is a script. When it is followed (again) will Donald Trump and his movement suffer any consequences? No. Instead, Trump and his mouthpieces will issue their obligatory “thoughts and prayers” and “concerns” about right-wing political violence. Trump’s supporters will understand the real message behind such false proclamations. Trump’s condemnations of violence by his supporters and others acting in his name are really not-so-subtle winks of encouragement toward even more heinous actions.