Planting native prairie could be a secret weapon for farmers

Prairie strips are a technical innovation drawn from the distant past 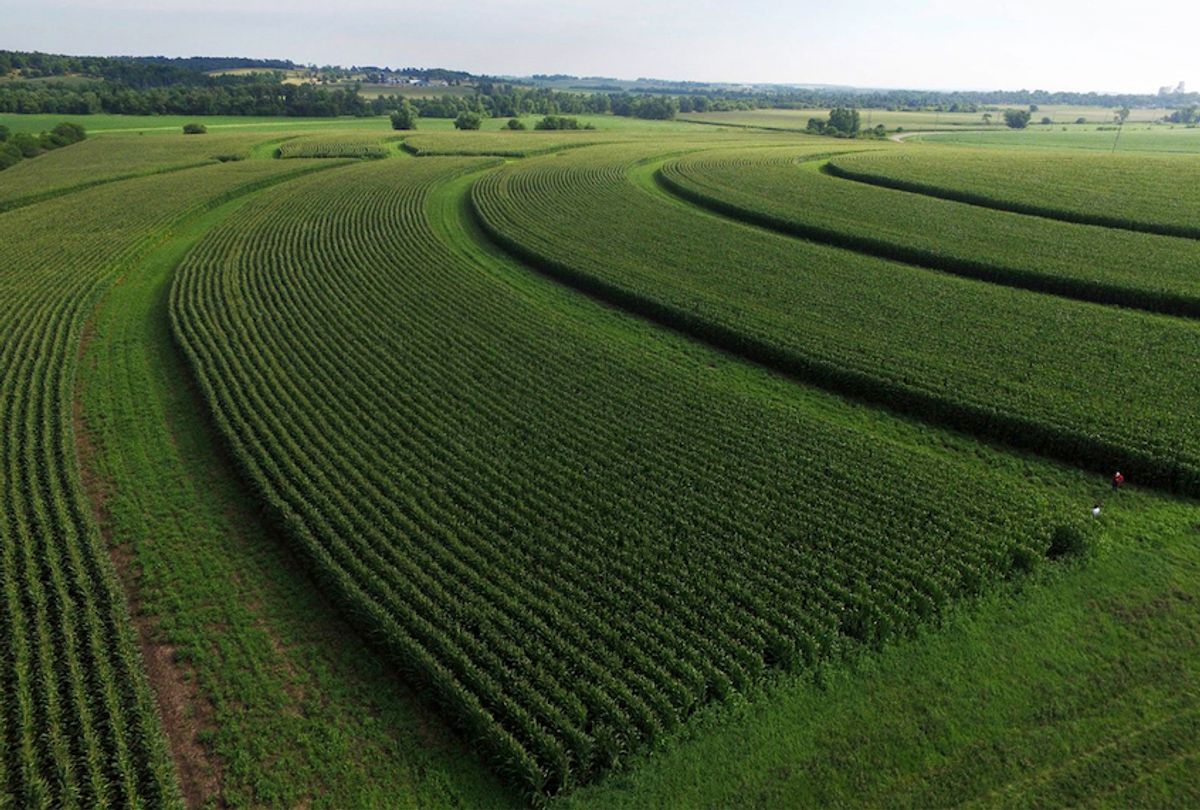 Prairie Strips on Larry and Margaret Stone’s farm near Traer, IA. Strips were frost seeded in January 2016 and this photo was taken in July 2017, showing the first year of growth. (Lynn Betts of the NRCS / SWCS)
--

When farmer Gary Guthrie describes recent changes to his farm, his eyes light up. After adding native prairie to his central Iowa operation, he remembers hearing the hum of pollinators flocking to the property.

“Oh, my goodness, it was stunning, the level of buzzing,” Guthrie said. “That moment was sort of an awakening for me.” The presence of so many bees and other insects was an indicator, to Guthrie, of the health of the land. 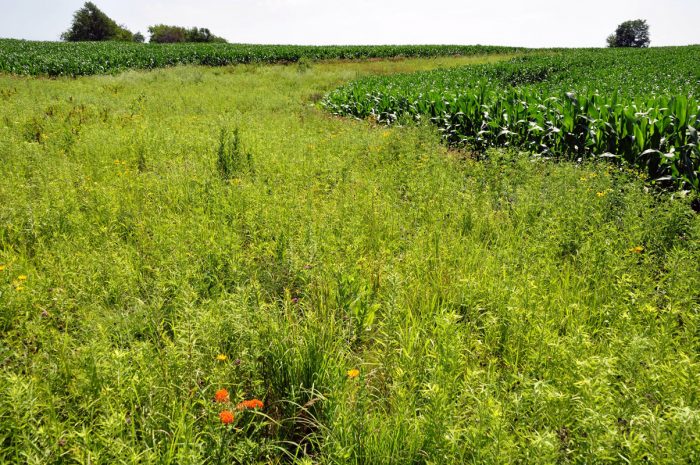 Prairie strips at Neal Smith Wildlife Refuge near Prairie City, Iowa, among the first established in Iowa. Iowa State University is studying their effectiveness for erosion control and other benefits.

Guthrie had help from the Iowa State University (ISU) STRIPS (Science-based Trials of Row-crops Integrated with Prairie Strips) program, which was founded in 2003 by scientists hoping study the effects of strategically planted native prairie for soil, water, and biodiversity benefits on farms. After 10 years, the team began to publish a series of papers laying out their results. They found that adding a prairie to a small fraction of a farm yields impressive benefits for water quality and nutrient retention, reducing erosion, providing habitat, and other benefits. In the years since, the ISU team has been working to help more farmers create native prairies.

Prairie strips are a technical innovation drawn from the distant past. “It’s sort of back to the future,” explained farm owner Lee Tesdell. His farm sits on 80 acres Tesdell’s great-grandfather bought in 1884; today he works with a farmer to raise corn, soy, and alfalfa using the latest regenerative agricultural technologies: cover crops, no-till practices, and prairie strips. It’s satisfying work, and part of a larger trend.

As the recent Intergovernmental Panel on Climate Change Special Report on Climate Change and the Land raises awareness of the key role that farmers and the land play in responding to the most pressing environmental concerns of our day, Midwestern farmers and research scientists are teaching us that prairie is a powerful, underrated tool for responding to some of those challenges.

Native prairie once stretched across the greater Midwest. Prairie ecosystems built some of the richest soils on Earth: black, porous, full of nutrients, and home to a diverse array of insects, birds, and mammals.

That good soil, though, does not regenerate itself when the prairie leaves. In the years since the widespread cultivation of this stretch of country began in the mid-19th century, the soil organic content has dropped by some 40-60 percent, and the topsoil, once an average of 14 inches deep in Iowa, has shrunk to less than an inch on average. Biodiversity, likewise, has been on the wane; pesticides, herbicides, and loss of habitat have greatly damaged insect populations, and, under the influence of erosion and fertilizer runoff, waterways, wetlands, and wildlife have all suffered.

Good land management, however, can help mitigate, and adapt to, the effects of soil and water degradation. The STRIPS research has shown that prairie strips are an effective way to “improve soil and water quality, foster carbon sequestration and storage, support populations of beneficial organisms for pest control and pollination, and generally foster biological functioning.” Additionally, the research found that the kinds of perennial species that thrive in prairie strips can moderate the impacts of climate change.

For birds, soil organisms, small mammals, and bees and butterflies, prairie strips also provide much-needed food and habitat. As the benefits of regenerative practices like these are made increasingly clear, the pressing question has become: What would it take to get more farms to use them?

Educating farmers to the benefits

Prairie strips are still in their nascent stage, with a relatively small number of early adopters adding prairie to their corn and soy production. Jorgen Rose of Practical Farmers of Iowa (PFI) puts the challenges to broader adoption in two major areas: technical and financial. 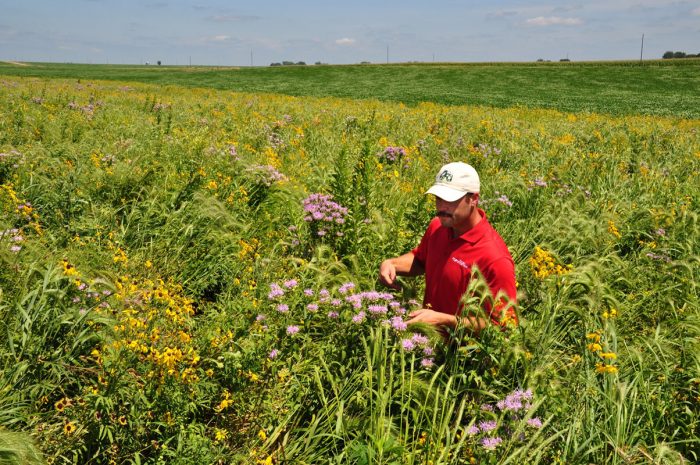 “There’s lack of awareness about the practice… or lack of knowledge relating to why it’s worth implementing,” says Rose. To that end, organizations like PFI and STRIPS have teamed up to arrange field visits and educational opportunities for interested farmers. They’ve joined some 65 farmer-collaborators in Iowa to make prairie a part of their farms. “By connecting farmers (and conservation professionals) at these field days and workshops, we can directly address technical barriers,” says Rose.

According to studies carried out under the STRIPS program, planting just 10 percent of farmland with native prairie can drastically reduce soil loss and nutrient run-off. Some evidence suggests that these improvements plus the increase in beneficial insects can increase crop yields, but research in that area is still ongoing.

Marshall McDaniel, a soil scientist at ISU, noted that making rigorous measurements of improvements in soil health and fertility takes a long time, and that fact can make it challenging to demonstrate the value of these practices. “The whole ballgame now is in finding ways to measure those things quickly and accurately,” he said.

While the research is still developing, farmers are seeing immediate results. Guthrie says the waterway beside to his farm went from muddy brown to what almost looks like “clear, drinking water” after planting the prairie buffers. And Lee Tesdell has measured a higher nitrogen content in his soil since implementing a variety of regenerative practices.

Adam Janke, a wildlife biologist who works with STRIPS, notes that some farmers also use prairie strips “to take odd areas or difficult-to-farm areas out of production” while reaping sustainability benefits as well. 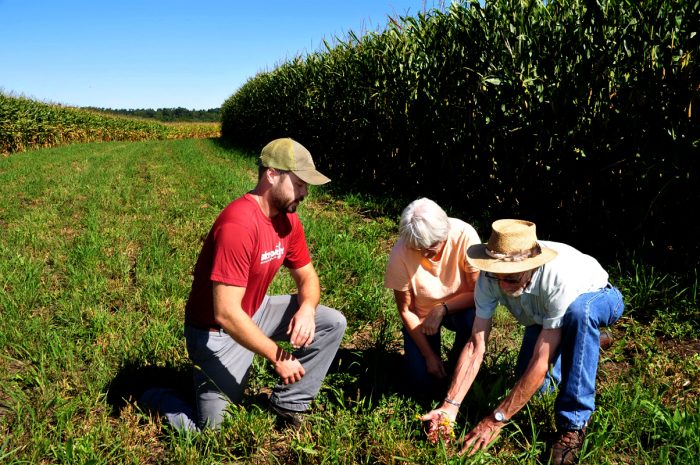 Tim Youngquist of Iowa State University (left) with Larry and Margaret Stone at their prairie strips near Traer, IA. This is a first year of growth after frost seeding in January of 2016. Prairie strips have been mowed to keep weeds down. September 2016.

“Edge-of-field practices have great potential for… [improving farmland’s] adaptation and resilience,” said Jorgen Rose; and this is especially true for prairie, by virtue of its diversity and deep, perennial roots.

It’s important to note that Guthrie and Tesdell, and most of the farmers that STRIPS works with, are conventional farmers growing large swaths of row crops. And while prairie strips can serve as an important tool for soil health, carbon sequestration, and water quality preservation; they are not a cure-all, and there remain many lingering questions about how the use of synthetic pesticides and fertilizers, even in regenerative agriculture operations, affect soil, human health, and pollinators.

Many conventional farmers can be a reluctant to take a financial risk on prairie strips, even if it promises to improve the overall bottom line down the road, Tesdell says. He has dedicated three acres to prairie, which he reckons at a loss of a little over $1,000 per year in unplanted soy, or about $1,700 in unplanted corn. That kind of sacrifice isn’t easy at a time when corn and soy prices have been down and trade wars add to the uncertainty.

McDaniel echoed Lee’s sentiment: “You have to understand that farmers are working against very thin margins and with a lot of uncertainty.” At a time when the need for conservation solutions on farms is most pressing, it can also seem most daunting to implement them. Iowa State, for its part, helps to connect farmers with funding that can help offset the costs of prairie strips and other sustainable practices. 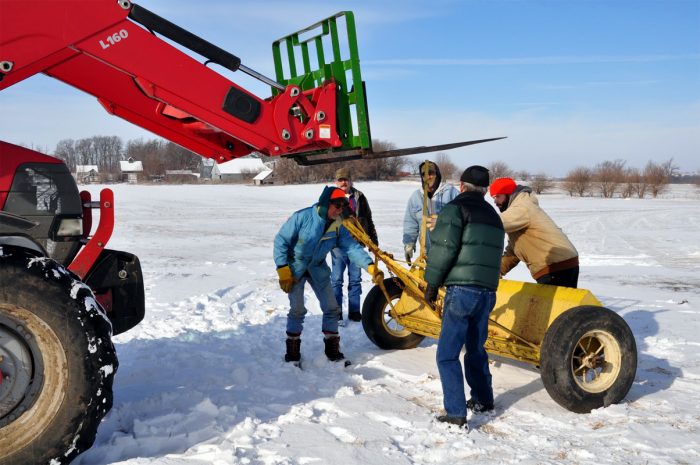 Conservation dollars can also help. Tesdell received assistance from a conservation group, Pheasants Forever, and pointed out that some of the Midwest’s largest food companies, such as Land O’ Lakes, have recently committed to “paying a premium to farmers who use sustainable practices.” Since 2018, funding for prairie strips has been made available through both the federal Conservation Reserve Program (CRP) and the Environmental Quality Incentives Program (EQIP).

Most farmers appear to be interested in practices that can help protect the land and the water, too. Biologist Adam Janke put it this way: “the imperative to protect the land is obvious to everyone that relies on it for their livelihood.” Janke says many farmers are aware of the challenges we face because they are seeing them in real-time. Broader change will come, he adds, when “more early adopters and local champions share their experience [with] why it works for them and their farm.”

Indeed, both Gary Guthrie and Lee Tesdell feel a responsibility to care for the land they steward, and both have worked to share the substantial benefits they’ve seen from adding conservation practices to their farms. “At the end of the day,” Tesdell said, “we just want to be a good example for our neighbors.”

The best advertisement for adding prairie might just be seeing the prairie itself. “We often hear that once folks establish the prairie on the farm, all those water, soil, and production benefits are great,” Janke said. “But the beauty of the prairie in July or the sound of the birds in June is the best reward.”

All photos by Lynn Betts of the NRCS / SWCS.