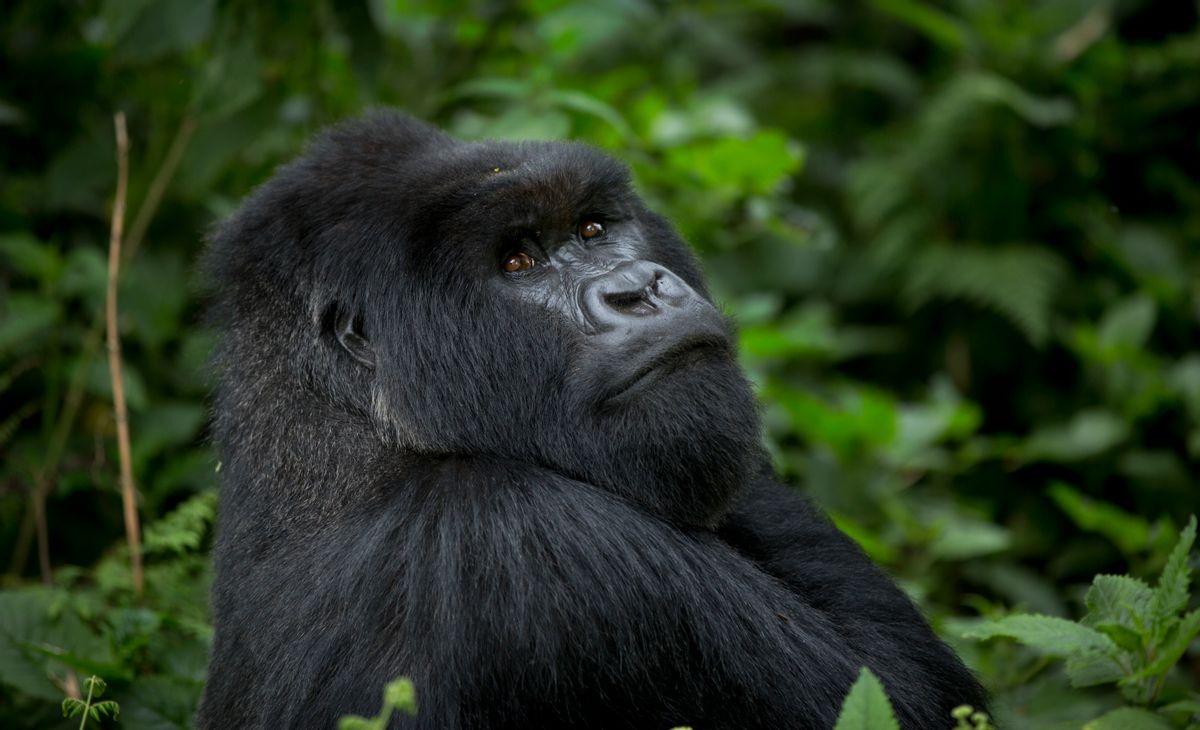 It’s hard to know what early humans ate. Since we can’t ask them, in order to gain insight into the evolution of the human diet, scientists are generally forced to combine what we know about living primates with fossil records. And what we thought we knew about gorillas is that they’re adapted to chew tough vegetation for hours on end, using the sharp crests on their molars to shear through tough leaves and stems. Teeth like these aren’t supposed to be able to be used to crack open hard nuts — but that’s exactly what primatologists in Loango National Park in Gabon recently observed one group of western lowland gorillas doing.

After watching Loango gorillas chow down on Coula edulis nuts for over three and a half years, Adam van Casteren of Washington University in St. Louis and colleagues from the Max Planck Institute published their surprising findings in the American Journal of Physical Anthropology. These nuts are approximately the size of ping pong-balls, and are a seasonal resource in tropical west African forests; in this part of Gabon, they’re only available from December through February, but are an energy-rich source of food.

During the 77 days that gorillas were seen eating the nuts, the large apes weren’t cracking them open with rocks, the way you might have seen chimpanzees and capuchin monkeys doing in nature documentaries.

The gorillas were doing it the old fashioned way — with their teeth. This behavior was surprising to the researchers, because while gorillas have powerful jaws and chewing muscles, they don’t have the kinds of flat, rounded molars that mammals who routinely crack hard foods open do. The sharp cusps on gorillas’ molars are an adaptation to the fibrous vegetation that makes up most of their diet (though western lowland gorillas do also eat a lot of fruit). But these cusps are a biological liability when it comes to eating hard objects, because they don’t distribute force the way a lower, more rounded cusp would. A cracked tooth could compromise a gorilla’s ability to eat and a serious infection could be life-threatening.

So the researchers decided to test how hard the C. edulis nuts are, using what’s called a portable universal testing machine, which measures force. They found that the average peak force needed to break the nuts open was just over 2700 N; this is about the same as required to crack open a macadamia nut’s shell, something no sane human would attempt to do with their teeth. Then the scientists compared these measurements to predictions from previous research on how much force is needed to chip gorilla teeth, and what their maximum possible bite force might be. It turns out that the Loango gorillas are basically pushing their teeth to the limit. The range of measurements the researchers got from the testing machine comes close to the predicted maximum forces possible for gorilla jaw muscles to produce, and for their teeth to withstand.

While the frequency of this feeding behavior in the Loango group was inherently surprising (gorillas eating hard objects is extremely rare), what it might mean for our own dietary evolution is also intriguing.

In the hominin fossil record, there’s a longstanding debate over what drove the increase in size of chewing anatomy over time, especially in the australopithecines and members of the genus Paranthropus. Was it lots of repetitive chewing of tough vegetation, like gorillas normally do? Or was it hard-object feeding, like nut cracking? Both of these feeding strategies are considered challenging, because they require either frequent loading of the chewing anatomy — think how your jaw gets sore after chewing gum for hours — or the production of high bite forces. The new data on the Loango gorillas reframes this debate, because it turns out anatomy doesn’t give as clear of a signal about behavior as we thought.

Today, humans eat all kinds of different things — we’re the ultimate dietary generalists. Teasing out whether our hominin relatives were similarly undiscriminating will require many different types of evidence, from the anatomy of fossils, to the isotopes incorporated into their bones via their diets, to the pits and scratches left behind on the surfaces of their teeth. But the surprising observations in Loango will spark a rethinking of form-function relationships — the relationship of a body-part to its purpose. As they had enlarged chewing muscles and jaws, our hominin ancestors and cousins could have been more flexible in their food choices we originally thought; they might have been specialized for one diet, but very capable of eating another when their preferred resources were scarce.

Rather than thinking of big chewing muscles and jaws as an adaptation to a single challenging diet, this new finding probably means we’ve been underestimating just how broad early hominin diets were.