His own minister of propaganda: With the Syria debacle, Trump's lying tweets hit new low

Everybody knows Donald Trump is a pathological liar. But his tweeting on Syria rivals the Big Lies of history 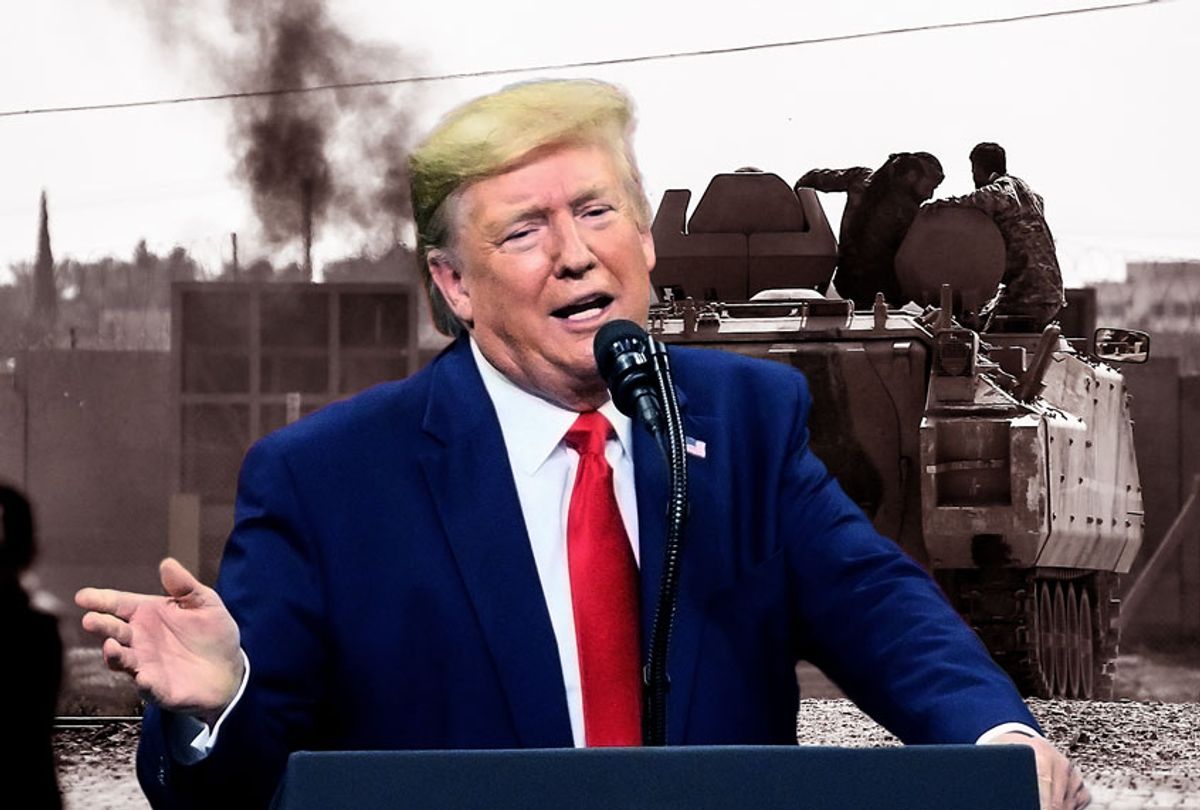 Donald Trump in front of and image of Turkish-backed Syrian opposition fighters on an armoured personnel carrier drive to cross the border into Syria, in Akcakale, Sanliurfa province, southeastern Turkey, Friday, Oct. 18, 2019. Fighting continued in a northeast Syrian border town at the center of the fight between Turkey and Kurdish forces early Friday, despite a U.S.-brokered cease-fire that went into effect overnight. (AP Photo/Getty Images/Salon)
--

Often he will lie and then when caught at it simply deny he ever said it, even if it's on tape or on his Twitter feed. Acting White House chief of staff  Mick Mulvaney adopted his boss's signature style when he confirmed on national television that Trump had withheld aid to Ukraine in exchange for dirt on his political rivals and then claimed that he had never said it. Trump does it with more confidence, perhaps because he's had so much practice.

But in the past few days, some of Trump's lies have taken a more traditional turn. Since he made his abrupt decision to withdraw protection from the Kurds in northern Syria, he's been tweeting and talking about the operation in terms that can only be compared to war propagandists like Tokyo Rose or Baghdad Bob of Iraq war infamy.

Most of the famous disseminators of disinformation during wartime, like Tokyo Rose or the English-speaking Nazi announcers known as Lord Haw-Haw, were people who had betrayed their own countries and gone over to the other side. Those flacks served a variety of purposes, from spreading misleading information about enemy war plans to discouraging enemy troops and the folks back home with lies about defeats on the battlefield.

But there are also homegrown propagandists who sell upbeat stories to their own folks to keep up their spirits when the war is going badly by telling tall tales of victory and success. Iraq's Baghdad Bob would be the most famous example of that. His dispatches during the invasion were so far from reality that they earned him a second nickname, "Comical Ali."

One of his most famous dispatches as U.S troops were taking Baghdad was "Americans are not even [within] 100 miles of Baghdad. They are not in any place. They hold no place in Iraq. This is an illusion ... they are trying to sell to the others an illusion."  He would frequently say that Iraqi forces were overwhelming the invaders and Americans were running away or committing mass suicide even as the world was watching the invasion unfold on live TV. It was Saddam Hussein's version of "You can believe me or you can believe your lying eyes."

It's unprecedented for a U.S. president to personally assume this role — these things are usually left to two-bit actors and low-level press people. But Trump as taken to it with relish. He is telling Americans that everyone is pleased with the operation in Syria, the Kurds are fine with it and there is no bloodshed or any unpleasantness at all. Here are a couple of examples from the past few days:

That last tweet originally gave the defense secretary's last name as "Esperanto," sparking no end of humor on social media. More importantly, Trump simply made up the quote:

Trump seems to have some grandiose delusion that the U.S. military will seize oil wells in eastern Syria and broker a partnership with the Kurds to split the profits. There is no word on how this is to be done without any American troops in the area, or whether the Syrians are on board with this. Sen. Lindsey Graham, R-S.C., has now backed off his criticism of the U.S. withdrawal called the president's plan "thinking outside the box." That's one way of putting it.

Trump has also made crude comments about how the Kurds and the Turks just "like to fight" and how you have to "let 'em do it for a while" like kids in a parking lot. He has said the Kurds are "not angels" and suggested that they bear responsibility for their plight.  But ever since brief ceasefire was announced, he's been spouting absurd happy talk, clearly trying to spin his epic foreign policy blunder — which may lead to ethnic cleansing and massive casualties — into some kind of historic agreement that will win him his coveted Nobel Peace Prize.

Let's just say that looks unlikely. This withdrawal operation is still in the early stages and it's hard to know exactly what's happening on the ground. But there are journalists and expert analysts on the region who are reporting every day, and the situation seems dire.  The Syrian Kurds are being driven out of the area where they've been fighting ISIS militants so Turkey can move non-Kurdish Syrian refugees into their homes and cities. There are reports of Syrian militias joining the Turks in the fight who are pursuing murderous retribution against Kurdish leaders.

The New York Times Rukmini Callimachi tweeted about one such incident:

There are reports of white phosphorus or napalm being used against Kurdish civilians. NBC foreign correspondent Richard Engel reports that some people are starting to wonder whether Americans could be held liable for crimes against humanity "for knowing about atrocities, failing to stop them, and potentially aiding and abetting."

According to the New York Times, Trump is not only lying about "bringing the troops home" (most will be redeployed to Iraq to fight the resurgent ISIS) but has apparently decided to keep a few hundred special forces troops in Syria as well. None of them will be coming home any time soon.

But according to the president, he's ending the "forever wars," terrorism has been defeated, the Kurds are happy and the world is at peace — and millions of people take him at his word. The question for manyAmericans may be, if Fox News doesn't show the carnage, did it happen at all?