Better than delivery: This sautéed onion-mushroom flatbread is elevated by spicy-sweet jalapeños

What makes it addictive? The spicy yet sweet note of a jalapeño reduced in agave nectar, vinegar and lime juice 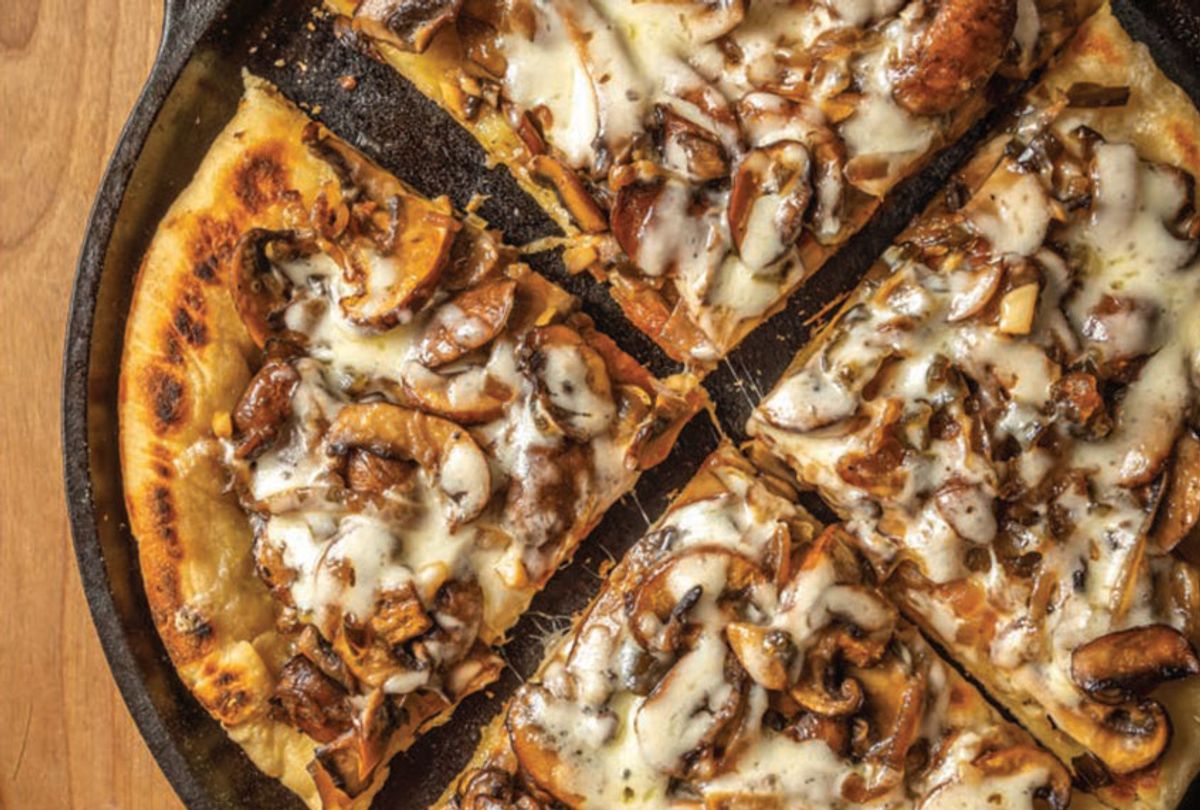 Decades after my mother gave me her cast-iron Dutch oven, I still simmer minestrone and braise short ribs in it. I also bake huge servings of her mac ‘n’ cheese in a 14-inch black skillet for open house buffets. In the process, I feel connected to my past and more comforting times. While mostly cooking for two now, my 8- and 10-inch skillets are the ones I reach for. They’re amazingly versatile, almost indestructible, and even stylish, judging by high-end restaurants that serve in them. Plus they’re inexpensive and, once seasoned, easy to clean. These are some reasons I noticed novices and seasoned cooks buying cast-iron.

This trend prompted me to revisit some of my favorite cast-iron dishes and create new ones inspired by my travels around the world. Along with classics, there are recipes for shakshuka and seasonal pumpkin pancakes, mushroom flatbread, perfectly seared steak, and ooey-gooey toffee-coffee brownies—choices for every hour of the day and every season. Cast-Iron Cooking for Two is for anyone who enjoys preparing and eating delicious food as well as the adventure of discovering new and exciting dishes from across the street and around the world. And, in a time when we need to support those affected by global disasters, I am donating a percent of the book’s profits to World Central Kitchen, the global initiative founded by Chef José Andrés.

With its sautéed mushrooms and onions topped with Monterey Jack cheese, this flatbread looks familiar. What sets it apart and makes it addictive is the subtly spicy yet sweet note from a fresh jalapeño reduced in agave nectar, vinegar, and lime juice, then minced and mixed in the topping to perfume each bite. I like it fairly spicy, but remove the seeds and membranes for less heat. Enjoy it for hors d’oeuvres, lunch, or whenever you want a tasty nibble.

In a 2-cup glass measure or bowl, combine the peppers, agave, and vinegar in a microwave and cook on high for 4 minutes. Remove, stir in the lime juice, cool, and chop fairly finely.

Place a 10-inch griddle or cast-iron skillet in the oven and preheat to 450°F.

While the griddle or pan is heating, in a large skillet, heat 1 tablespoon of the oil over medium-high heat. Add the onion and sauté until wilted, 2 to 3 minutes. Add the remaining oil and mushrooms, and sauté until richly browned, about 4 minutes, stirring often. Stir in the garlic, oregano, salt, and Spicy-Sweet Jalapeños including any liquid. Turn off the heat.

Dust the dough and workspace lightly with flour. Using a rolling pin, roll and stretch the dough into an 8-inch circle about ¼-inch thick. Brush the hot griddle with oil, add the dough, and carefully flatten it with your fingertips. Cook until golden brown in spots, about 2 minutes; using tongs, turn and cook the second side until browned in spots.

Brush the flatbread with a little oil. Spoon on the mushroom mixture, sprinkle with the Jack cheese, and transfer to the oven to bake until the cheese is melted and bubbling, 4 to 5 minutes. If desired, run briefly under the broiler to brown a bit more. Remove, let stand for 5 to 10 minutes, cut into wedges, and serve.

Like this recipe as much as we do? Click here to buy a copy of the Cast-Iron Cooking for Two: 75 Quick and Easy Skillet Recipes.