Making hot sauce with my fruitful habanero plant seemed like a good idea at first, but now it's taken over my life 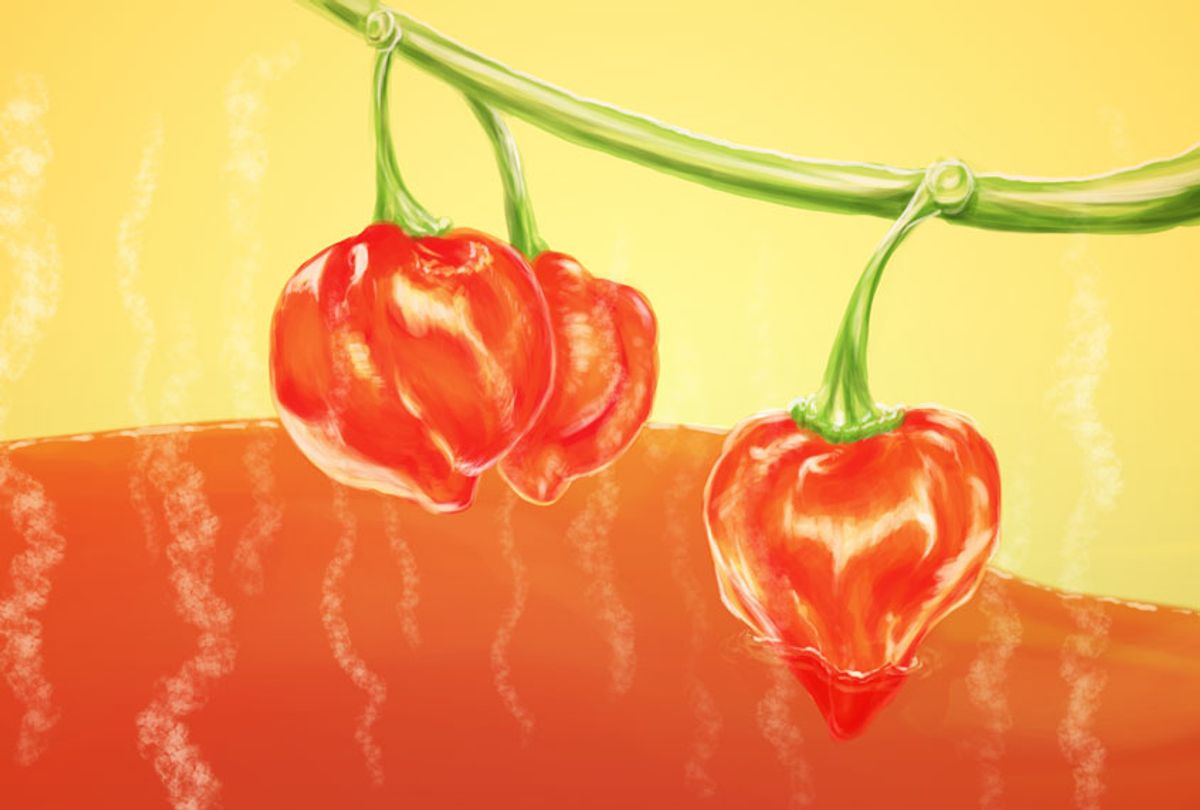 It all started so innocently at the beginning of the summer. While I was eating dinner in Brooklyn, I shared with some good friends how my little backyard container garden was doing.

"I'm afraid my habaneros are growing faster than I can even eat them," I lamented, a state of affairs which genuinely surprised me, as I love little in life more than spicy food.

"Ah, you should make hot sauce with them," one of my friends, who also grew up in Texas and has an obsession with making salsas and hot sauces, responded.

His wife even recommended Rick Bayless‘ recipe, which they both assured me would be plenty spicy.

At first, this suggestion felt like the perfect solution to what I really did not want to see as a problem: a rapidly growing habanero plant, which had crowded out everything else I had planted in that container bed and was popping bright red chili peppers out faster than a kid's acne breakout in the week before prom.

Better yet, with an Instant Pot, I could be lazy about making hot sauce. Instead of chopping, simmering and stirring, I just pulled all the ripe habaneros off my plant, which was up to 40 at a time, and dumped them in the pressure cooker with a barely-chopped onion, a handful of garlic cloves, a bag of baby carrots and some salt and vinegar. I would then set the timer for about 15 minutes, and when it went off, I would apply a handheld blender for a few minutes to the whole concoction. The result was often cups and cups (and cups) of hot sauce.

But to say this process was easy was not to say it was painless. Habaneros, for those who are unaware, rank pretty high on the Scoville scale of measuring pepper heat — considered on the lower end of "volcanic" at 150,000, which is below "explosive" but above "torrid.” In practice, this means making this hot sauce is like getting lightly pepper sprayed.

Needless to say, the only acceptable level of being pepper sprayed is "not at all,” as evidenced by the alarm on my partner's face the first time I made this hot sauce when he walked in on me weeping openly as I navigated the blender around the inside the Instant Pot. The cats, being wise, had absconded to another floor of the house — as far away from the venomous pepper air as possible.

The unintended consequences continued to play out. Yes, the hipsters these days are all bragging about their ghost peppers or their Trinidad vipers. But let's not be fooled into thinking the humble habanero is of a soft or gentle nature, because there happen to be hotter peppers. For hours after making this hot sauce, the kitchen had an unbearably thick spiciness to the air. And no matter how much I washed the Instant Pot, it still had a habanero odor to it, which pervaded every dish I made with it for weeks afterwards.

And yet .  . the hot sauce tastes really good. A small amount of it goes a long way, and the heat profile and flavor remind me of some of your better bottled hot sauces, such as El Yucateco. Being a pepper belly, I spread this — carefully — on everything I eat. And not just on Mexican-style foods like tacos, either. I drip a tiny amount on bagels. I put half a teaspoon in my bean soup. I eat it on sandwiches and on scrambled eggs for breakfast. I foist it on friends when they come over to eat, glowing from the praise for my better-than-bottled hot sauce.

Hot sauce in the bottle is not cheap, either, so finding a way to make bucketfuls of it — even as it fills my freezer, since I'm definitely too lazy to try to find ways to bottle it — suits the cheapskate in my heart. After all, my "recipe" — which is a thrown-together version of Bayless’  much more carefully measured recipe — costs about $3 to make between the onion, the carrots and the garlic. But it makes many more times the amount of hot sauce than you get for $3 when you buy it in a bottle.

Still, my relationship to habaneros is starting to resemble Mickey Mouse's dilemma in "The Sorcerer's Apprentice.” I keep picking them, and they keep multiplying at alarming speeds, forcing me to make yet another batch of hot sauce at least once a month. That’s far faster than even the most dedicated spice head can eat hot sauce. And like Mickey Mouse, I feel as though I’m drowning in a sea of liquid. Only in my case, it’s an extremely spicy hot sauce — not mop bucket water.

Now a few months into my newfound habanero processing method, I have at least 20 cups of habanero hot sauce in my freezer, all stacked up in little Rubbermaid containers, each batch flavored with the tears that inevitably flow when I make this stuff. And I'm not done yet.

Last week, I counted another few dozen habaneros sprouting in various shades of green and red on my plant, springing up like gremlins after you throw water on them. I have grown a lot of plants in my life, but none have created in me the same mix of dread and joy and fear as that habanero plant.

1. Toss everything in the Instant Pot. Set manual timer for 15 minutes.

2. While it's going, make sure to wash your hands at least three times — and probably more. Otherwise, you will touch your eye, and the pain will be unbearable to the point where you will start to wish for the sweet relief of death. Really get under those nails with the soap.

3. When the timer goes off, release the pressure valve while burying your face in a dish towel. Apply the hand blender while contemplating every sad part of your life, because if you're going to be crying you might as well get it out all at once.

4. Freeze, secure in the knowledge that you now have so much hot sauce that it will probably last all winter.

5. Air out your kitchen, so standing in it without crying becomes possible again.