Do Republicans think their voters are complete idiots? Their Trump defenses sure look that way

Republicans' cosplay protest was based on a largely correct principle: Their voters will swallow anything for Trump 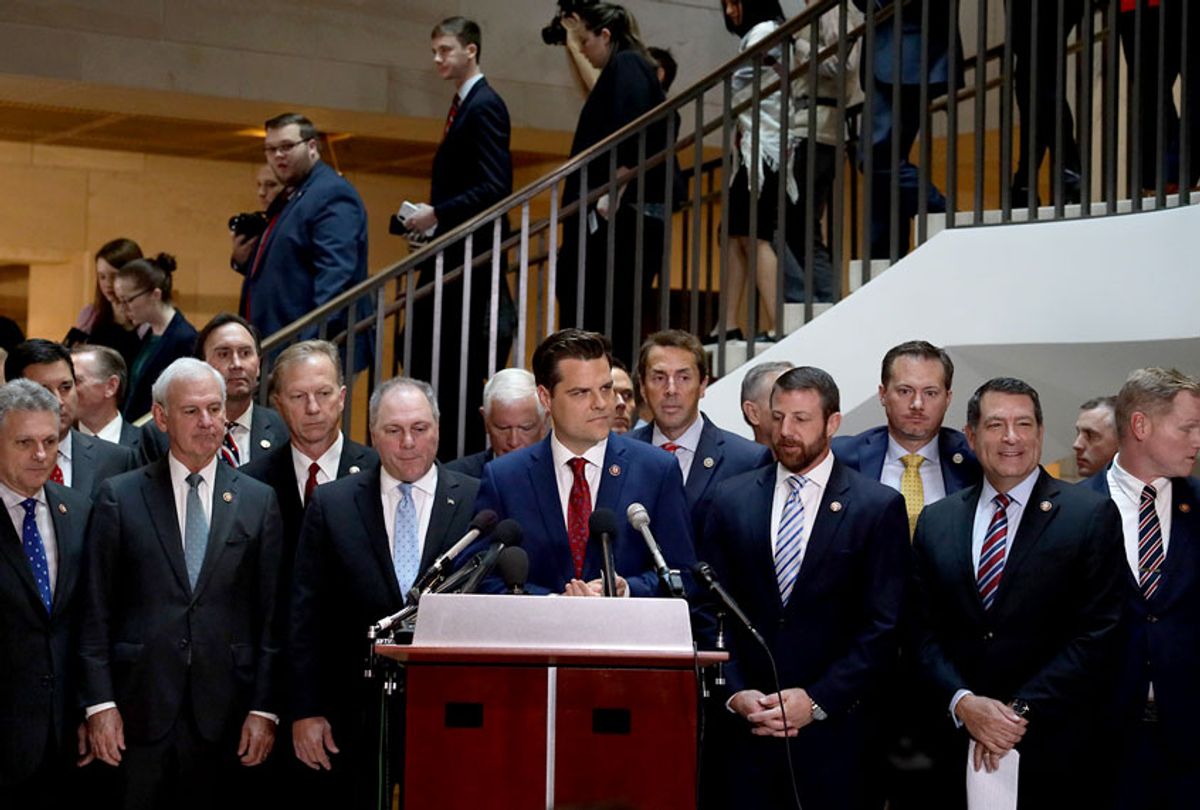 Even by the standards of the Donald Trump era, the stunt pulled by congressional Republicans on Wednesday was cretinous. A group of House members stormed the security-intense Sensitive Compartmented Information Facility (SCIF) room where the House committees holding impeachment hearings planned to question Deputy Assistant Secretary of Defense Laura Cooper about Trump's scheme to use military aid to extort the Ukrainian government into validating his anti-Democratic conspiracy theories. They successfully held the testimony up for hours, leading to lots of exultation on Fox News and right-wing social media. It was soon revealed that Trump, being a reality TV host above all other things, was in on the stunt.

This sit-in cosplay seemed intended to impress the media into imagining that Republicans, like the civil rights activists and Occupy Wall Streeters they so loathe, have a legitimate grievance with the impeachment inquiry process. Instead, Republicans ended up signaling how guilty they think Trump is and how certain they are that the only way to protect their orange leader is by shutting down any investigation into his already evident crimes.

Congressional Republicans persisted, despite being snickered at, because even if the mainstream media isn't buying the we-shall-overcome act, those GOP members clearly believe they can bamboozle their voters. The escapade captured the fundamental theme of pretty much all Republican defenses of Trump: They believe their voters are morons.

The talking point to justify these antics was that, by having closed door meetings, House Democrats are being "secretive." At least, that claim was made in a press release from terminal wingnut Rep. Matt Gaetz, R-Fla., who declared that the protest was a demand for "increased transparency and inclusion in the impeachment process."

This claim is dumb for a couple of obvious, glaring reasons. First of all, Republican members of the relevant committees are included in the hearings, of course. In fact, 13 out of the 41 Republicans who participated in this stunt were fully entitled to attend Cooper's testimony and ask her questions. Second, the only reason Republicans are in such a panic is that they know that the evidence coming out of these hearings is extremely damaging for Trump — which they wouldn't know if the process were actually secretive instead of leaky as a sieve. Third, Republicans know full well these closed-door meetings are just a preliminary to the public hearings likely to begin in November.

(At which point we should not be surprised if all the Republicans now decrying "secrecy" will do a complete about-face and complain that public hearings are a "show trial" and a security threat.)

Despite all this, on Thursday morning the hosts of "Fox & Friends" pretended to believe that the feigned outrage from Gaetz and company was somehow valid, even as Fox News contributor Andrew Napolitano, unable to completely forget his legal training, explained that there was nothing untoward about having closed-door hearings ahead of public ones. Clearly, the producers and hosts at Fox News think their audience is brimming with gullible idiots who will swallow any line of transparent nonsense, so long as it can be used to defend their beloved Trump.

This whole incident is just one piece of a Trump defense strategy based entirely on the assumption that Republican voters are too stupid, whether willfully so or otherwise, to get that they're being lied to.

For instance, Trump and his allies at least briefly floated the idea that there was "no quid pro quo" in demanding that the Ukrainians open phony investigations into Democrats in order to get their military aid released, because — they really tried to argue this — Ukraine didn't know that the aid was being withheld. Multiple Fox News personalities repeatedly aired claims that Ukraine "didn’t know that the military aid had had a pause on it" and "Ukrainian leaders didn’t even know that aid was being withheld."

This, of course, defies common sense. It assumes that Ukrainian leaders simply forgot that they were expecting a huge amount of military aid that they desperately want to help stave off Russian aggression. It also doesn't make sense in light of the overwhelming evidence that Ukrainian leaders were acutely anxious about the aid being withheld and repeatedly begged the Trump White House to release it.

Ukrainian President Volodymyr Zelensky is literally quoted telling Trump, in the White House-created pseudo-transcript of his phone call with Trump, that they are "ready to buy more Javelins from the United States for defense purposes" At which point Trump famously replies, "I would like you to do us a favor though," before pressing Zelensky to publicly back Trump's conspiracy theories.

Oh yeah, and in the trove of text messages between U.S. diplomat Kurt Volker and Andrey Yermak, an aide to Zelensky, we learn that Yermak literally texted Volker a Politico article headlined "Trump Holds Up Ukraine Military Aid Meant to Confront Russia," and adds, "Need to talk with you."

Unsurprisingly, Ukrainian leaders have confirmed that they didn't just forget that they needed a bunch of American weapons to fend off Russia. This didn't stop Fox News from trying to convince viewers that Ukrainians who kept pressing for aid didn't even know it was missing. Hours after the  Ukrainians had set the record straight, Fox News host Jesse Watters was still telling this lie.

Over and over again, the talking points churned out by Trump and his allies illustrate their utter contempt for the intelligence of Trump voters. Former acting attorney general and professional Trump defender Matthew Whitaker had the nerve to claim, on Fox News, that "abuse of power is not a crime." (Extortion and bribery sure are, my man.)

And the entire right-wing propaganda apparatus swung into action trying to discredit Bill Taylor, the acting U.S. ambassador to Ukraine, who did a great deal to expose Trump's extortion scheme with his testimony earlier this week. Taylor has been painted as merely a disgruntled employee who "was disappointed with the way the president was handling things and Rudy Giuliani was handling things."

Well, no kidding. Taylor was disappointed (to put it mildly) to see the U.S. president commit crimes that literally endangered human lives and the sovereignty of an American ally. Only extremely dumb people would buy the idea that an eyewitness account of a crime only counts if the witness has a good opinion of the person he saw committing a crime.

To be fair, it's understandable that Trump and his propagandists treat Republican voters this way. Such voters have done a great deal to earn that contempt by behaving just as stupidly and reactively as their political leaders expect. These transparently silly defenses of Trump appear to be more than good enough for Republican voters, who continue to oppose impeachment at a ratio upwards of 80%.  If social media is any indication, there are plenty of conservatives eager to parrot the bad-faith claims about "secrecy" that House Republicans were touting on Wednesday.

It remains unclear if conservatives who say such things are really that stupid, or if they are just saying things they know are untrue in a desperate bid to defend their beloved, criminal president. It's probably a mix, but my guess is that in most cases these folks are more liars than idiots. Trump supporters, like Fox News pundits, believe they are in on the con.

This is what American conservatives have become: A mass of gaslighters numbering in the millions, all of whom pretend to believe things no sensible person could possibly believe, all in order to protect a man who would sell any one of them out for a nickel. And all this because they can't admit it was probably not a good idea to make a shamelessly corrupt reality-TV host with no redeeming human qualities the most powerful man in the world.