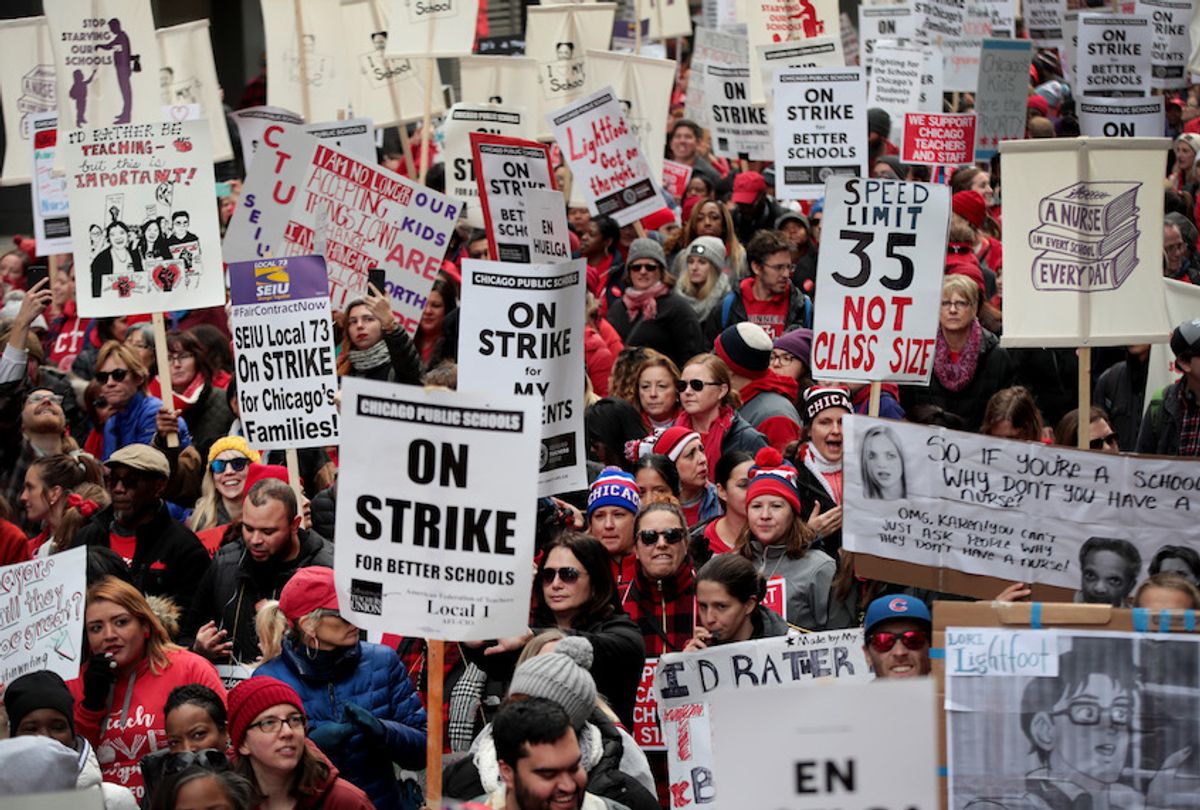 Striking Chicago public school teachers and their supporters march through the Loop on October 17, 2019 in Chicago, Illinois. (Scott Olson/Getty Images)
--

Chicago public school teachers and support staff — on strike since Oct. 17 for smaller class sizes and improved services for students — received a boost Tuesday when they were joined on the picket lines by Democratic presidential hopeful Elizabeth Warren.

The Massachusetts senator joined strikers with the Chicago Teachers Union (CTU) and SEIU Local 73 outside Oscar DePriest Elementary in the Austin neighborhood on the city’s West Side. “The CTU and SEIU are out on strike for our children. They’re out on strike for working people everywhere,” Warren, who was once a public school teacher herself, told reporters. “I’m here to stand with every one of the people who stand for our children every day.”

Warren’s visit comes as talks between the unions and the city appear to have broken down. On Monday, Mayor Lori Lightfoot wrote an open letter to CTU president Jesse Sharkey, calling on the union to end the strike without a contract as negotiations continue — essentially telling the teachers to surrender their only leverage at the bargaining table.

“We are likely not going to see a quick settlement to the ongoing strike,” Sharkey said at a press conference after receiving the mayor’s letter. “I came in today with raised expectations and hope, but the letter I received today dashed my hope for a quick settlement.”

At the same time, 7,500 Chicago Public Schools (CPS) support staff with SEIU Local 73 — who have also been on strike since October 17 — had their first bargaining session with the city since the work stoppage began on Monday. These workers include custodians, bus aides, special education classroom assistants, and security guards making less than $35,000 a year. The bargaining session lasted only 12 minutesbefore city negotiators walked away without bringing forward any new proposals, according to SEIU Local 73.

On the campaign trail earlier this year, Lightfoot promised that as mayor she would “provide each school with basic educational support positions like librarians, nurses and social workers.” As the CTU demands she make good on this promise in contract negotiations, Lightfoot now says “there is no more money.”

“We need to ask those at the very top to pitch in a little more so that we can actually make the investments in every single child in this country,” Warren said at the rally.

Warren’s visit follows that of fellow Democratic presidential candidate Bernie Sanders, who came to Chicago last month to lead a solidarity rally with CTU members as they voted to authorize the strike. At that rally, Sanders said, “For the last 45 years there has been a war in this country by the corporate elite against the working class of our nation. The only way to win prosperity for working people is when we significantly increase membership in trade unions all across America.”

So far, no 2020 candidate has publicly expressed support for Mayor Lightfoot in the labor dispute, while more Chicagoans approve of the strike than oppose it. Meanwhile, several of Chicago’s progressive politicians have sided with the unions, including the six democratic socialists on the City Council.

“CPS teachers and staff are giving their all out on the picket lines to fight for justice in our schools, so we have to give them our all in support,” said Alderwoman Rossana Rodriguez-Sanchez, a member of Chicago Democratic Socialists of America who was elected earlier this year.

Rodriguez-Sanchez and the city’s other socialist alderpeople have been working with Chicago DSA and Chicago Jobs with Justice to serve thousands of free meals to CPS students and strikers through “Bread for Ed,” a solidarity initiative that raised over $30,000 for food in one week.

“This strike is about winning public schools that serve Chicago students’ and parents’ needs, and a Chicago that's for the working class — not the rich and powerful,” explained Will Bloom, Chicago DSA secretary.