Those who found the 448-document too daunting, here's an illustrated version updated with every new development 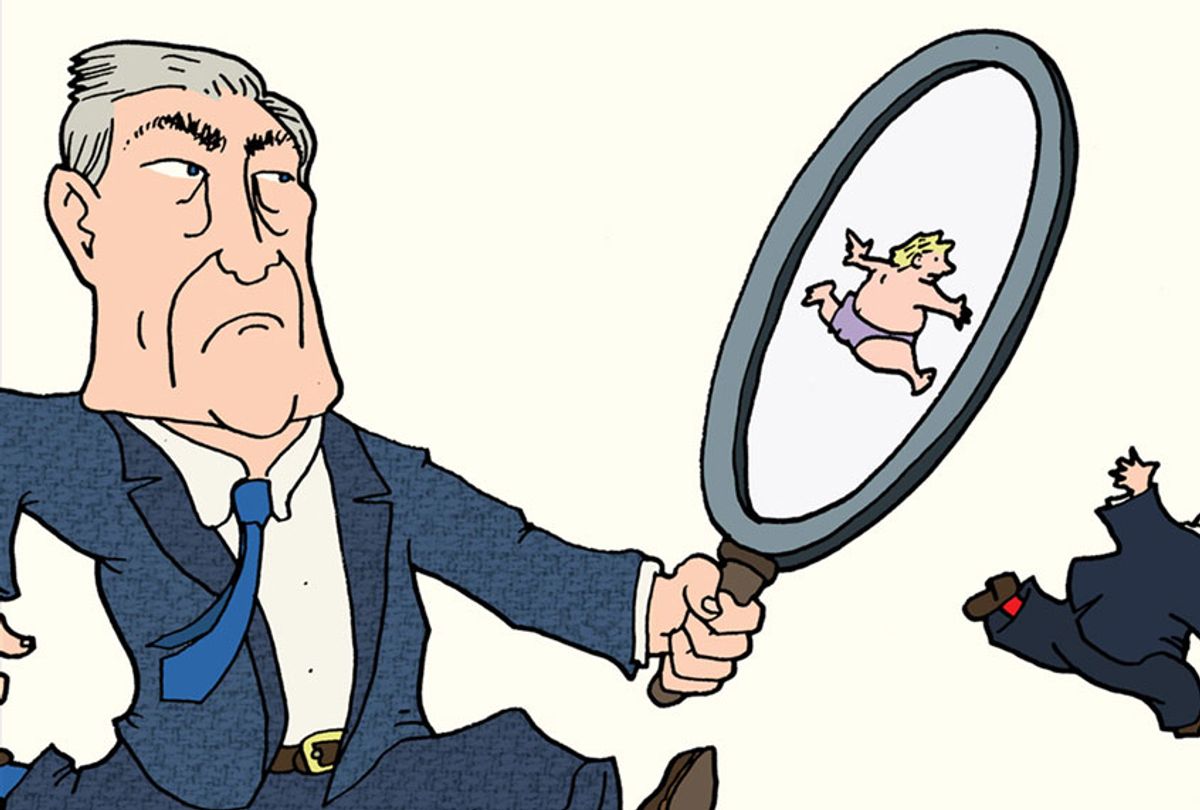 In March, Special Counsel Robert Mueller submitted the “Report on the Investigation into Russian Interference in the 2016 Presidential Election” to Attorney General William Barr. There had been a tremendous amount of speculation about its contents and what it would reveal about President Donald Trump and his relationship with the Russian government. The 448-page document, which became known as the Mueller Report, was released to the public about a month later.

But in the nearly six months since, it’s unclear how many people (including, as Politico reported in July, key politicians) have actually read it. And I get it — it’s a complex document, that alternates between dry and impenetrable.

As I wrote over the summer, creative people were starting to develop unique adaptations, including live readings, 60-second summaries and a Schoolhouse Rock-style video. New Yorker cartoonist Shannon Wheeler is one of these people. He’s in the midst of edits on his much-anticipated graphic novel “The Mueller Report,” in which he has distilled the documents main findings into illustrated form.

I spoke with Wheeler about the novel, its creation, and how he is dealing with the onslaught of Trump-related news throughout the book’s finalization. Check out the interview below, along with the exclusive preview of four pages of the "Mueller Report" graphic novel (and some bonus cartoons from Wheeler himself):

Jumping into the big question: what drew you to the idea of taking the massive, really dry document — that, you know, some of our politicians haven’t even read — and turning it into a graphic novel?

First, I think it's really an important document to read. Initially, when I'd only read small bits, and I kept hearing AG Barr and politicians — Republicans or even Democrats — talk about it, and they were spinning it in ways that was running contrary to what I read.

So my initial impulse was like, just trying to think, how do I accurately represent this? Just out of frustration for how misrepresented it was.

And then, I had done a book with Mark Russell where we took the Bible and reduced it down; then I had done a book of Trump’s tweets and illustrated them. So, it’s kind of like — an odd marriage of Trump’s tweets and the Bible, right? It also comes from this long history of comic books taking pieces of literature and reducing them down into understandable chunks. My mom often did her book reports from reading the “Great Illustrated Classics.”

I actually have your book, "Postage Stamp Funnies" right in front of me. So these, they’re tiny. They’re brief. There’s this immediate visual witticism or joke. How is the process different for a project like this?

I actually see them being very similar; a single panel as being very much a reduction. So taking a larger, big idea and just taking it down to the essential kernel of it. It’s the same thing with the Mueller report. He has a big idea, he has a thesis and he has a supporting thesis.

The overlap is also just trying to be funny and letting your brain do the work of coughing up a joke. A lot of my training came in high school when I was sitting in boring classes, watching a terrible teacher. I would just start drawing in the margin of my notes. So that’s partly what I’m doing when reading this report, and then I’m also reacting to it on an emotional level — there’s this kind of visceral reaction like when Mueller says, "This is where Trump was obstructing justice." I would then draw Trump stepping forward and trying to obstruct the view of what we’re trying to understand.

Like what did happen with Trump and his dealings as you look into the election? Did he enable Russians to come in? Was there collusion? And then afterwards, when the investigation started, did they try to stop the investigation? Those are some of the main questions — so just drawing Trump reacting to that.

I was hoping you could talk a little bit about your actual process for getting the book together so quickly. Did you read the entire thing first? Did you tackle it in sections and kind of jot down notes along the way?

Yeah, I read it through once. Then all these other people have started doing projects, so I would listen to a podcast where they did a dramatic reading of it. Then there was an audiobook that was released and I listened to that straight through. There’s another podcast where they’re breaking it down and analyzing different sections.

I’ve been hooked up with somebody on Capitol Hill and her specialty is the report; she answers to a senator and she’s like the go-to person. So I’m using her to vet ideas. Like, "Does this adequately represent this section?"

It’s definitely overwhelming, and that’s when I thought was I need is to work with somebody else. So I pulled in Steve Duin, who is a columnist, a journalist whom I’ve worked with before on a book. And I said, "Hey, can you do some of the broad strokes? Can you can you break down these things into chapters and pull out significant events?"

There are several graphic novel adaptations of the report coming out, and I remember that Tucker Carlson from Fox was talking about one and he just sort of immediately dismissed it, saying that it was a picture book and that he didn’t want to lose IQ points reading it. I’m a huge graphic novel fan, but there’s still a dismissal of the form. Do you run into that in your work?

Yes and no. There is still some prejudice against it. I mean, comic books in America really have come out of a tradition of aiming at children. But it really is a unique medium, and the power of it is that it’s working with both the left and the right brain. You get the words and you get a visual, so it’s activating both sides.

But yeah, I think the perception is changing a lot because it really is just a slightly newer language. It’s a different medium than a straight textbook. We’re learning, we’re changing. And you know, you’d think that after “Maus” winning the Pulitzer Prize it would be greeted with a bit more legitimacy.

So, let’s talk details of the book. It comes out in April 2020. Do you have an idea how long the finished product will be?

Right now we are clocking in at about 150 pages. It’s a rough draft, so we’re running through and now it’s a matter of saying, "What did we miss?" I’m going back in and adding more stuff. I’m wanting to add an extra 16 pages because of the phone conversation with [Ukranian President Volodymyr] Zelensky. And then also the whistleblower papers — you know, he wrote an introduction letter and that an amazing piece. And then now we have the Bill Taylor intro letter.

So I want to include the new events as they happen, and so it’s probably going to have some little appendix and I’ll probably be drawing up until the day we go to press.

This interview has been condensed and edited for clarity. You can donate to Wheeler’s Kickstarter to help fund the inclusion of “The Whistleblower Papers” in zine form.