“The Kominsky Method,” like a fine wine, improves with age 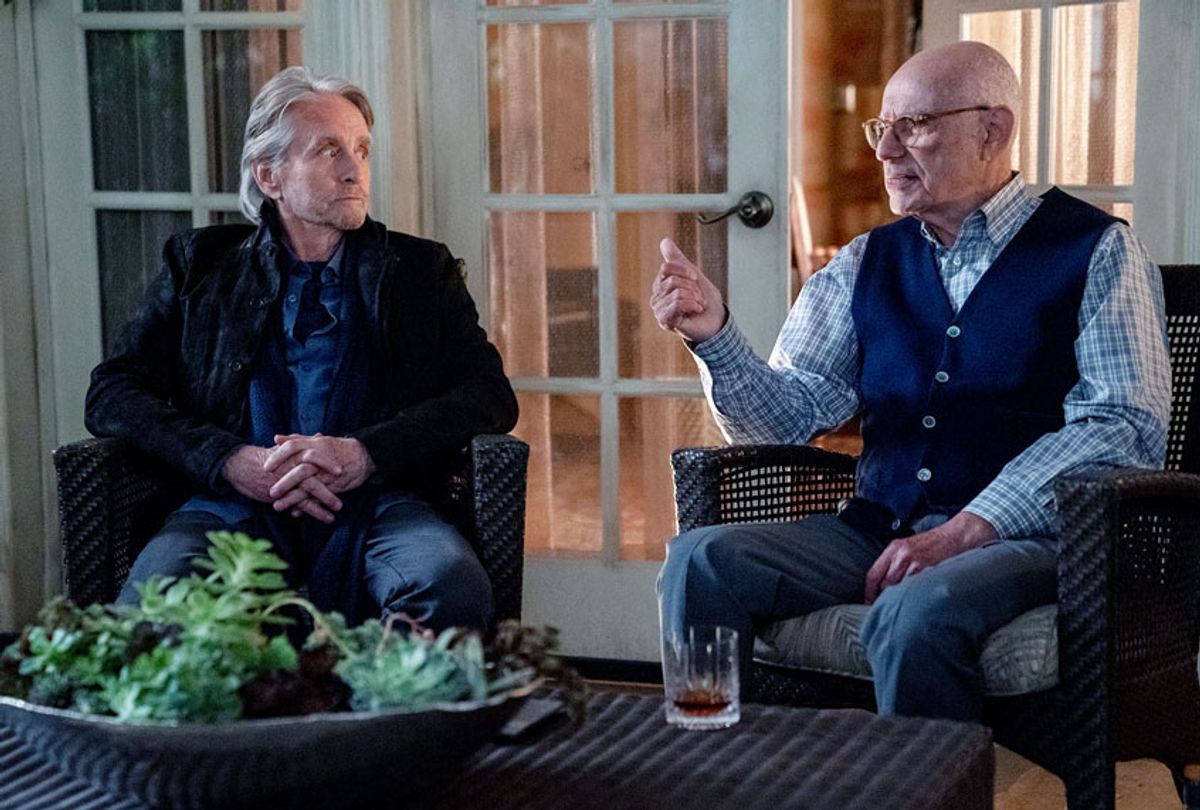 In the second season of “The Kominsky Method,” octogenarian Hollywood agent Norman Newlander (Alan Arkin) attends an acquaintance’s funeral, and leaves having reconnected with an old flame.  “At our age, it's called having a social life,” he quips to his longtime friend, aging actor Sandy Kominsky (Michael Douglas).

This type of gallows humor is to be expected from the Chuck Lorre-created comedy, which uses certain uncomfortable elements of aging to bolster the series’ most lighthearted moments — erectile dysfunction, enlarged prostates and the strange ways we can injure our backs doing everyday things. It makes these jokes without, in turn, making the characters themselves punchlines; this was a strength of the show’s first season and continues into its second.

But what really propels the new season of “The Kominsky Method” is how the truly awful things about getting older — the death of those closest to us and coming to grips with our own mortality in the face of health scares — seriously bind Sandy and Norman, showcasing a type of deeply vulnerable friendship that historically hasn’t been given a lot of screen time when its shared by men of a certain age.

This is in spite of, and honestly heightened by, the pair’s differences. A lot of Season 1 was spent working in broad strokes and big plotlines to establish this. Sandy is a thrice-divorced womanizer; Norman had been with the same woman for nearly 50 years. Sandy is fun, but fiscally irresponsible; Norman has a dry humor and pretty healthy financial portfolio. On the surface, they’re not likely candidates to be friends.

The writers nod to this in a scene about halfway through the season. Two student actors from Sandy’s class decide to perform a scene from “Two and a Half Men” (another Lorre show). After they proclaim, “End scene,” Sandy takes a beat and remarks “OK, that was one way to rip off ‘The Odd Couple.’”

But Season 2 takes a slightly more nuanced approach to mining the men’s differences by focusing on their perceived similarities, pulling on the threads that connect them, and laying them bare for viewers. They’re on more even ground this season; Sandy and Norman both have daughters, they both still have careers and their wit, and now, they both have lovers.

On the parenting front, both Sandy and Norman are struggling to figure out where they fit in their adult daughters’ lives. Mindy (Sarah Baker), Sandy’s long-suffering daughter who holds together the day-to-day operations of the acting studio, has started dating a man (Paul Reiser) who is old enough to be her father; this comes after a lifetime of watching her own father date women young enough to be her sister.

Then there’s Phoebe (Lisa Edelstein), Norman’s estranged daughter who struggles with pill addiction. She is back from rehab and the pair seem destined to be at odds, despite Phoebe’s desire to make amends.

The developments in their daughters’ lives inspire the men — especially Norman — to consider who they’ve been in the past, not just solely as fathers, but as people. These reflections go on to inform their budding romantic relationships; Sandy with his on-again-off-again girlfriend and acting student Lisa (Nancy Travis) and Norman with his new girlfriend, Madelyn (the delightful Jane Seymour).

But through it all, Sandy and Norman rely on each other for humor, for comfort and for insight — all elements that this season possesses. And while this season is perhaps a little more subtle than the last in the plot developments, the pair continue to excel at, as Norman puts it, “making the mundane exciting.”

The second season of "The Kominsky Method" is currently streaming on Netflix.