Who is Bill Taylor? I’ve known the guy who rocked Capitol Hill this week for 50 years

My West Point classmate is a Vietnam veteran and an experienced diplomat. Most of all, he’s an honest man 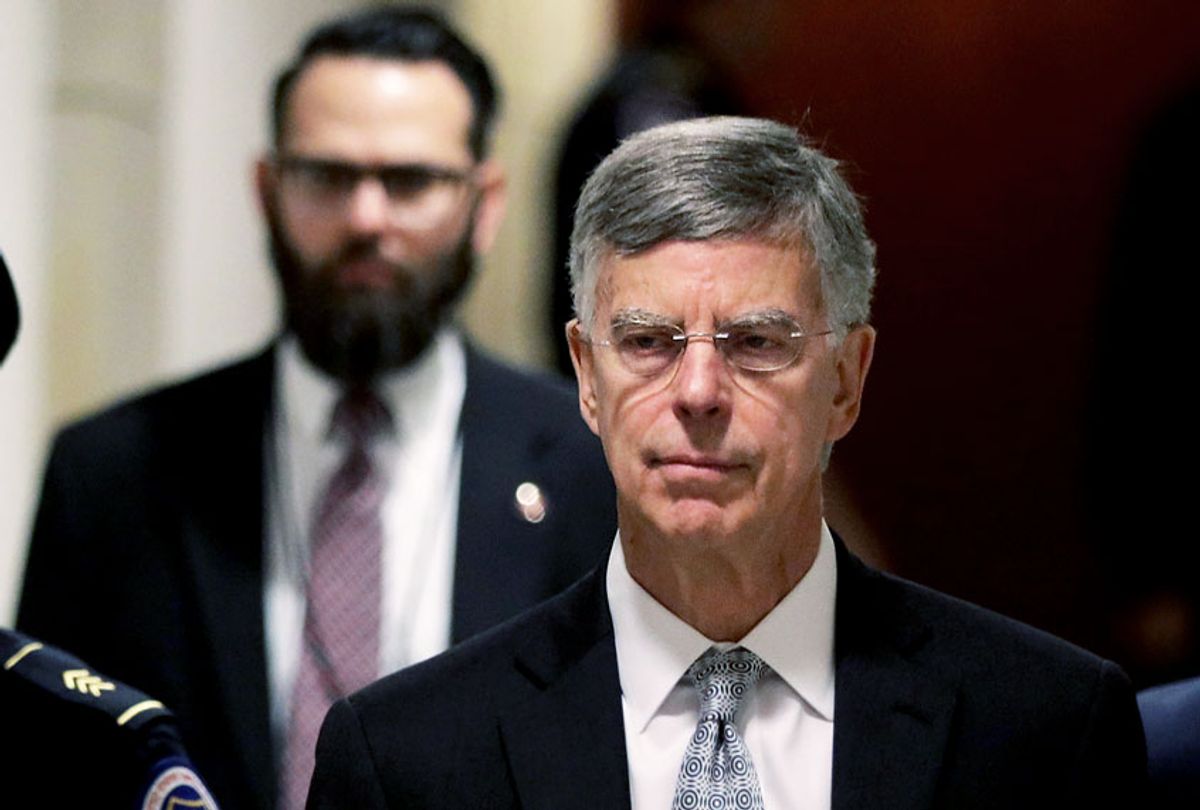 Bill Taylor (C), the top U.S. diplomat to Ukraine, arrives at a closed session before the House Intelligence, Foreign Affairs and Oversight committees October 22, 2019 at the U.S. Capitol in Washington, DC. Taylor was on Capitol Hill to testify to the committees for the ongoing impeachment inquiry against President Donald Trump. (Alex Wong/Getty Images)
--

It was July of 1966, and we were at Camp Buckner undergoing military training during the summer between our freshman and sophomore years at West Point. I am sure it was hot. It was always hot at Camp Buckner that summer, hot and dusty out on the ranges where we did our training, or hot and muddy if it had been raining.

I saw some photographs of us at Camp Buckner when I attended our 50th class reunion at West Point this past May, and I have to say, we looked impossibly young. There were a few guys in the class a year or two older who had served as enlisted men in the Army before entering West Point, but the rest of us were 18 or 19 years old. We had made it through Plebe year, and now we were Yearlings, as sophomores at West Point were called. We had a whole year as cadets under our belts. We felt like we could do anything.

West Point was constantly reminding us that we were some of the best and the brightest in our generation. In a class of about a thousand, somewhere around 100 of us had been class presidents, or presidents of our student councils. More than 200 of us had been in our school honor societies. I recall that about 60 or 70 of us had been Eagle Scouts. There were more than 100 class valedictorians, and dozens of us had won civics awards from Kiwanis clubs or Lions clubs or chambers of commerce.

We were training to be officers in the Army, to become leaders of other soldiers when we graduated, but almost all of us had already had leadership experience in school, or sports, or various clubs. Bill Taylor was among them. We had gone to the same high school, Mount Vernon, in Alexandria, Virginia. Our fathers had been classmates in the West Point class of 1945. Bill was our senior class president. He was a National Merit scholar. Everyone knew he was going places.

Now we were at West Point together. We had been in the same cadet battalion during the school year, and now we were in the same company at Camp Buckner. That meant we did our training together at the rifle range, when we went out in the field and learned to aim and fire Howitzers, when we ran the obstacle course, when we they taught us to fire the M-60 machine gun and the 81mm mortar.

One day, we rode in the backs of deuce-and-a-half trucks out to a range for engineering training. There were about 30 of us. We were given the mission of bridging a small creek. The gap between the banks was about 25 feet wide and about six feet deep. On one side of the creek was a pile of logs and lumber and on the other side was a jeep with a major sitting in it. Our job was to build a bridge that was strong enough for the major to drive the jeep across. We were given two hours, as I recall.

So here’s the scene: Thirty or 40 hot-shot cadets, virtually every one of whom considered himself a leader capable of directing the others in the mission to build the bridge, but there was no person in authority to choose the leader of the group. Everybody started shouting at once. Someone pointed out that the logs weren’t long enough to bridge the gap, so we’d have to build some kind of support in the middle, and someone else grabbed a few guys and they started lining up to carry the larger logs on their shoulders to get them in position.

But what position were the logs supposed to be in? And how were we supposed to hold the thing together? There were no spikes or nails, only some hemp rope and the logs and lumber. I remember there was some spazzing around for a few minutes when nothing much got done. Then I heard Bill’s voice. He was standing in the middle of the creek, pointing at the banks. The way to do it was tension and pressure, he said. Start with the support structure, and then lay logs end to end, meeting in the middle, held in place by pressure against the banks on each end.

It made sense. We could use the hemp to tie together braces for the mid-support, and more of it looped around the logs laid side by side to form the sub-floor of the bridge, and still more to hold the shorter logs we laid across the cross-beams to form the surface…

We formed several teams and started moving the logs. That was the last time I heard Bill’s voice above the general din of guys working together. He was moving from group to group, pitching in to shoulder the logs, getting another group of guys to lay out the logs on the ground so we could see the way they would look when they were lifted into position, encouraging everyone as he went.

We got the bridge built inside the time limit and stood back and watched the major slowly drive the jeep across. The bridge groaned against the hemp ropes and there was a moment when the jeep’s tires reached the end of the logs on the other side when it looked like they wouldn’t hold. Then the tires grabbed the earth and the major drove the jeep onto the bank. The bridge held.

We disassembled the bridge and stacked the logs and loaded into the trucks and headed back to the main camp. Bill Taylor had run things out there, but it hadn’t felt like he was in charge. He just was.

I would have loved to have been a fly on the wall this week when he testified in the so-called SCIF on Capitol Hill. An NBC report described the scene this way: “The room went silent during Taylor’s 45-minute opening statement, which he delivered in a steady yet confident tone, stopping just a few times to take a sip of water, according to a source in the room. ‘You could hear a pin drop,’ one source said.” I’ll bet you could.

Another report said that Republicans were close-mouthed as they exited the room after Taylor’s testimony. I’ll bet they were.

It took Trump two days to attack Taylor, and then all he could manage was calling him “Never Trumper Diplomat Bill Taylor (who I don’t know).” Wow. I bet that shook him up.

Taylor’s testimony directly tied Trump to the decision to withhold aid to Ukraine in return for an “investigation” of his political opponent Joe Biden. It’s the closest we’ve come to a “smoking gun” in the impeachment investigation. It’s why the Republican “freedom caucus” loons pulled a Brooks Brothers riot when they invaded the SCIF on Wednesday. It’s why Lindsey Graham is trying a resolution condemning the impeachment investigation in the Senate. They’re desperate to defend Trump, and they’ve got nothing to defend him with.

The question on everyone’s lips all week has been, what makes a guy like Bill Taylor do the right thing? The answer I’ve got for you is this: That’s who he is. He’s one of the most careful, conservative guys I’ve ever known, in the best and most real sense of the word “conservative.” He took the West Point motto, “Duty, Honor, Country” seriously. He took the West Point honor code seriously. He took his oath to uphold and defend the Constitution of the United States seriously. I’ve known him since we were in high school, and he’s never wavered in all these years.

When I was growing up, there was one question my father used to ask me and my brother when we were at the dinner table and said someone was bullied at school, or a kid had used racist language, or a teacher had acted unjustly to another kid in class. “Did you stand up?” our father would ask us, hardly looking up from his plate. The rule in our house was, when you were asked that question, you had better be ready to answer in the affirmative.

Our fathers were classmates at West Point. They lived by the West Point motto and honor code, too. I’d be willing to bet Bill Taylor was asked the same question by his father at the dinner table. And I’ll bet I know his answer.