Nationals fans were “un-American” for chanting “lock him up” at Trump, Joe Scarborough says

Democratic Sen. Chris Coons agrees that the "office of the president deserves respect even when the actions" don't 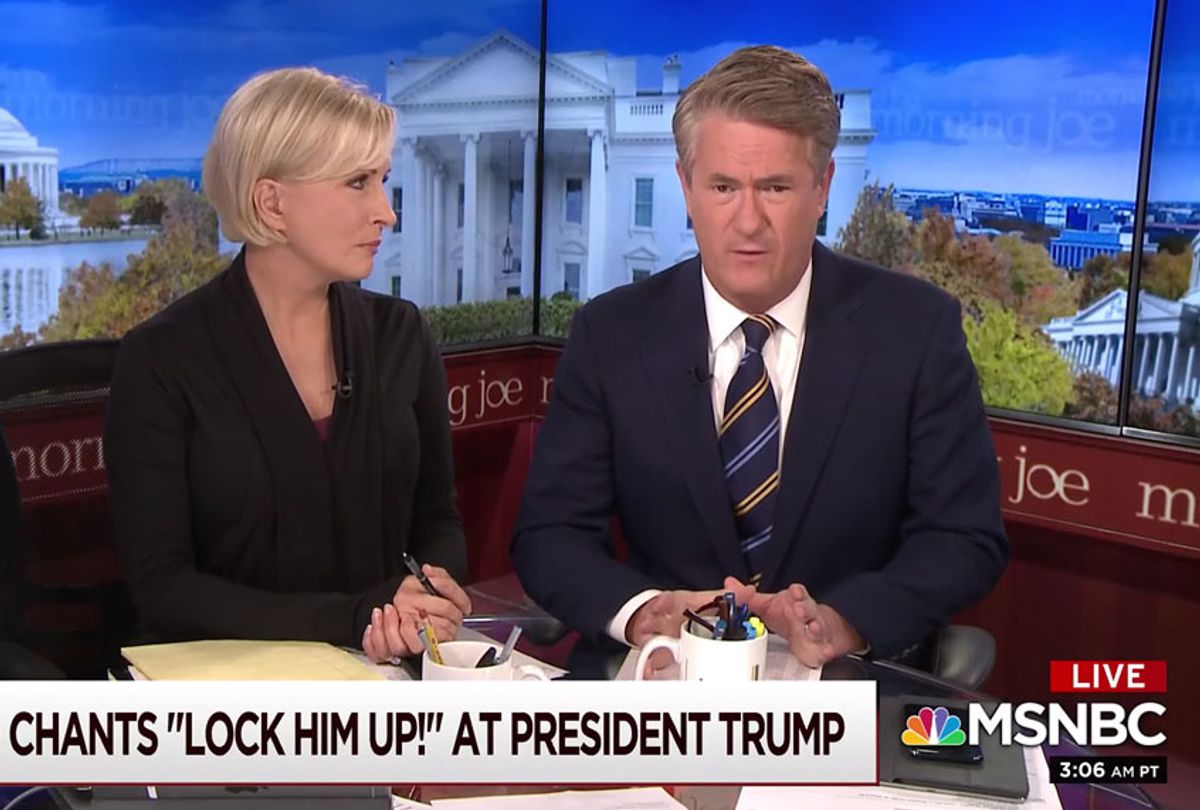 Joe Scarborough and Mika Brzezinski on the October 28, 2019 airing of 'Morning Joe' (MSNBC)
--

MSNBC host Joe Scarborough criticized fans who chanted “lock him up” at President Donald Trump during Game 5 of the World Series on Sunday as “un-American.”

Trump attended the game at Nationals Park in Washington with first lady Melania Trump and a gaggle of Republican lawmakers. Videos posted to social media showed fans cheering when members of the military were featured on camera. Those cheers turned to a chorus of boos when the president's emerged on the big screen.

Some videos from the event showed fans chanting “lock him up” at the Trump, echoing the frequent cheer aimed at former Secretary of State Hillary Clinton during his own political rallies.

Scarborough, a former friend of Trump who has since become a vocal opponent, said on Monday’s edition of “Morning Joe” that he found the “lock him up” chants to be “un-American” — even though it began as a “centerpiece of his campaign rallies.”

“We are Americans, and we do not do that,” Scarborough said. “We do not want the world hearing us chant 'lock him up’ to this president or to any president.”

Scarborough then claimed that having the chant backfire on Trump might cause his supporters to think twice about using it in the future.

“Let’s hope, as we move forward, maybe this is one less fascist tactic he and his supporters use during their chant — that you’re actually going to imprison your political opponents,” Scarborough said.

The "Morning Joe" clip drew immediate backlash after it was posted on social media. Critics on Twitter claimed that there was a difference between the president leading the chant and a random crowd doing spontaneously joining in one.

“Um, no,” wrote Asha Rangappa, a CNN analyst for previously worked as an FBI special agent. “A President who *leads* a ‘lock her up’ chant against his political enemies smacks of authoritarianism. Americans who chant ‘lock him up’ to a President who acts like a tyrant and believes he is above the law is calling for accountability.”

“Your words have a different meaning when YOU ACTUALLY CONTROL THE LEVERS OF POWER than when you don't,” she added. “It’s why ‘do me a favor’ coming from POTUS to the President of Ukraine is different than a random person saying the same thing.”

David Simon, the journalist and author who created HBO’s “The Wire,” contended that America needed more — not less — dissent.

“The misrule, cruelty and infantilism of this administration is such that some sense of an enduring ethos is actually redeemed when we the people openly express our contempt,” he wrote. “Dissent is the most American thing there is -- and to get clean, we need as much as there is on display.”

"Well, forgive me. I’m enough of a sort of traditionalist about our institutions that even at a time when there is a lot that our president does that I find disturbing, offensive, unconventional, I have a hard time with the idea of a crowd on a globally-televised sporting event chanting 'lock him up' about our president," the Democrat told CNN on Monday. "I frankly think the office of the president deserves respect, even when the actions of our president don’t.”

Coons expressed hope that the chants would not continue at Democratic rallies or at the Democratic National Convention.

“I think that’s one of the most regrettable — even at times despicable — actions by candidate Trump when he was running for president in 2016,” he said. “It reminds me of things that happen where the rule of law is unknown or unestablished. Whipping up public furor on both sides I don’t think it is constructive or helpful.”

“Respect earned is respect given. The office of the President deserves respect. The man who currently occupies that office does not,” she wrote on Twitter. “He has defiled the office and chose to use it for personal gain. Enough with the righteous indignation for a tyrant wannabe.”