Republicans aren't flailing or desperate: Their attack on impeachment is strategic — and might work

Republican attacks on impeachment "process" have a clear goal in mind: Senate acquittal, followed by re-election 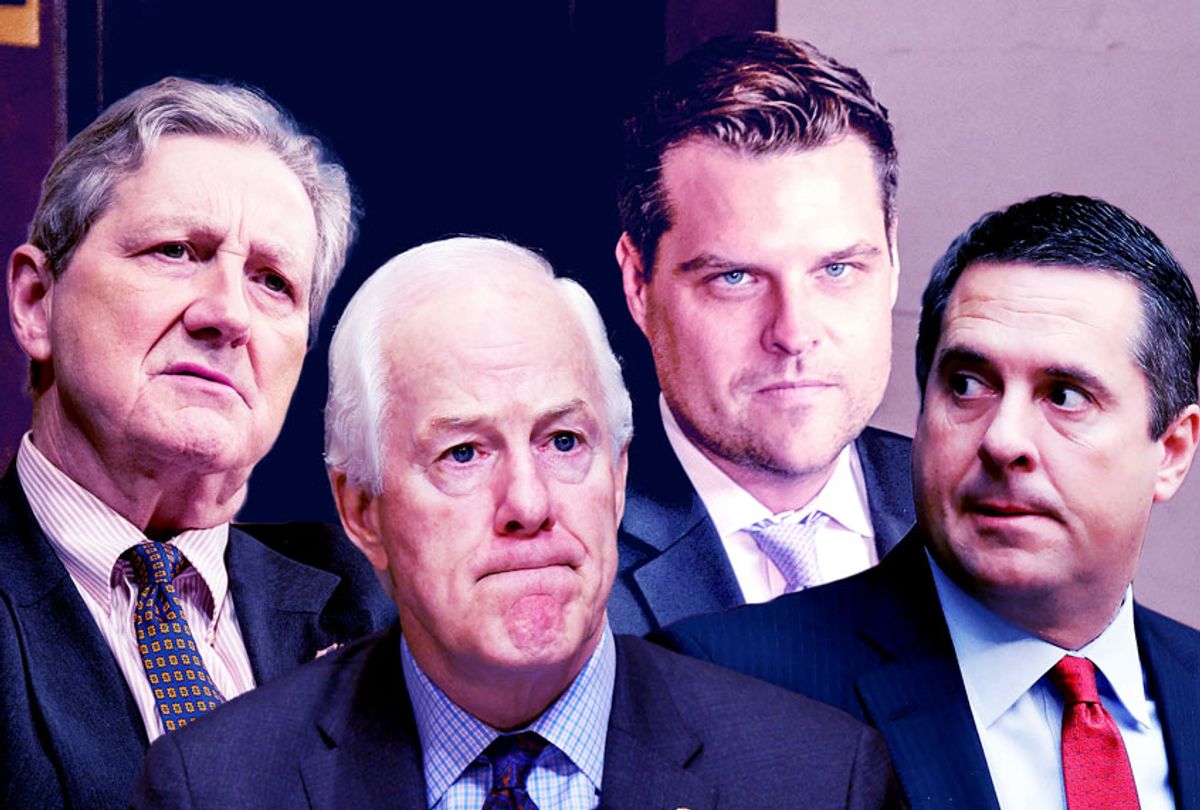 President Trump left the safe bubble of his properties and his rallies to venture out into a world where people don't cheer ecstatically whenever he appears. He attended the fifth game of the World Series on Sunday night at Nationals Park in Washington, and was lustily booed by the crowd, some of whom also held up impeachment banners and chanted "Lock him up." Trump is not used to that sort of thing and he had a hard time hiding his discomfort.

He probably thought he was going to be received as a hero since earlier in the day he'd announced that U.S. Special Forces had staged a raid in Syria that led to the death of ISIS leader Abu Bakr al-Baghdadi. (Who has been declared dead several times before, to be fair.) No doubt he was gravely disappointed to turn on the TV and see that the impeachment inquiry that is bedeviling him remains at the top of the news. If he had it in his head that wagging the ("beautiful, talented") dog would tamp down impeachment talk, by the time he got into his jammies on Sunday night he must have realized that it didn't work.

Last week we saw the absurd protest staged by Trump's favorite court jester, Rep. Matt Gaetz, R-Fla., and several dozen other GOP members of Congress who stormed the secure facility where witness depositions are taken in private session. They made a big show of claiming that the process is being used improperly by House Intelligence Committee chairman Adam Schiff, D-Calif,, because Republicans like Gaetz are not allowed in the room to ask questions and transcripts are not being released to the public.

This is ridiculous, of course, since all members of the House Intelligence, Oversight and Foreign Affairs committees, of both parties, are allowed to participate and ask questions. According to the Washington Post, Republicans, led by Intelligence Committee ranking member Devin Nunes, R-Calif., have been quite active during these long depositions. Mostly they seem to be trying to find out the name of the CIA whistleblower, and to further conspiracy theories about Ukraine supposedly working with Hillary Clinton to sabotage Trump in the 2016 election. They also want to know if these witnesses are loyal to Trump because, as we know, anyone who fails to declare fealty to him cannot be trusted to tell the truth. With his usual dignity and grace, Trump recently suggested that at least some of these witnesses were "human scum."

Meanwhile, we had Sen. Lindsey Graham, R-S.C., fatuously declaring that the impeachment inquiry is unfair and offering a resolution to condemn it in the Senate. That was a meaningless gesture, more or less designed as a test vote to reassure the president that he doesn't have to worry about being convicted in an impeachment trial. As of Sunday, only three Senate Republicans had failed to sign on.

But some of them have gone even further, such as Sen. John Kennedy, R-La., who told CNN's Jake Tapper that he believes Schiff and House Speaker Nancy Pelosi want to give Trump “a fair and impartial firing squad.” (Kennedy sees himself as a clever and colorful character.)

Sen. John Cornyn of Texas just went for it:

That's odd, considering that Cornyn signed the recent Senate Select Committee on Intelligence findings confirming that Russia was behind the 2016 election interference. So he knows better. But he's up for re-election in Texas next year and is playing to the big rube in the White House, who was no doubt pleased.

The Beltway conventional wisdom, repeated like a mantra dozens of times a day, is that the Republicans aren't winning on the facts of impeachment so they are reduced to attacking the process. That assumes this is some sort of wild Hail Mary pass without any hope of accomplishing anything. Pundits and analysts marvel at the fact that the White House doesn't have an "impeachment war room" and that the president serves as his own communications director, assuming that means the process is thoughtlessly chaotic and purposeless. Axios reports that an informal impeachment meeting now takes place daily in the White House, but it doesn't appear to be geared toward a disciplined response to the onslaught of revelations because that's simply not possible. Donald Trump is uncontrollable and there's no use even trying.

That doesn't mean there isn't a plan. It might not be fully articulated or laid out in a PowerPoint presentation. But for all of Trump's many failings he does have one talent: personal survival. He has been dancing as fast as he can his whole life, and he is highly skilled at getting out of trouble.  In this case, we can see how he thinks he's going to do that, because he has already done it once during his presidency.

People underestimate how well the "No collusion, no obstruction" and "Witch hunt!" strategy worked with the Mueller investigation. When Robert Mueller took that job he was considered the single most honorable,  straight-arrow lawman in the nation, and was widely praised by prominent members of both parties. But through sheer repetition, echoed by his media minions, Trump managed to convince millions of people that Mueller, a lifelong Republican, and his team of prosecutors were a bunch of vengeful Democratic hacks out to take him down for partisan reasons. With the help of Attorney General William Barr, that narrative was reinforced upon the release of Mueller's report, and it solidified the "witch hunt" meme that Trump and his supporters continue to push to this day.

I think most people who aren't in the TrumpWorld bubble were taken aback that the Mueller report didn't pack a bigger punch. After all, it laid out a case that the president had welcomed election interference by a foreign adversary on his behalf, and then repeatedly broke the law trying to cover it up. But Democrats in the House seemed unimpressed and the public more or less shrugged it off. True or not (and of course it wasn't), "no collusion, no obstruction" pretty much stuck.

Trump and his henchmen are running the same game with the impeachment inquiry into Ukraine. They're denigrating the witnesses, attacking the investigation as a partisan witch hunt, and saying that Trump's phone call with the Ukrainian president was "perfect" over and over again. It is apparent that they expect the president to be impeached in the House, but they will acquit him in the Senate — not on the merits of the case, but because the process was supposedly illegitimate.

The point is to rally their white working-class voters by stoking their rage and resentment, and trying to convince what remains of their white college-educated vote to stay the course. Imagine the feral, frothing-at-the-mouth Lindsey Graham of the Kavanaugh hearings leading the charge, with a smirking Mitch McConnell by his side. Ted Cruz and Rand Paul and Tom Cotton will give soaring speeches railing against the Democrats' illegal crusade to depose the duly elected president, echoing the Trump's robotic messages once again. Perhaps there will be a couple of defectors who vote to convict — Mitt Romney and one or two others — but nonetheless, Trump will be acquitted and will spin it as "total exoneration" once again.

Will it work? Who knows? If I had to guess I'd say it won't be persuasive to the Independent and suburban voters he's going to need to eke out another win in the Electoral College. But it's a mistake to assume that Trump and the Republicans are flailing around without any purpose, and attacking the process for lack of any other options. They're doing this because it's worked before, and they figure they might just get away with it again.