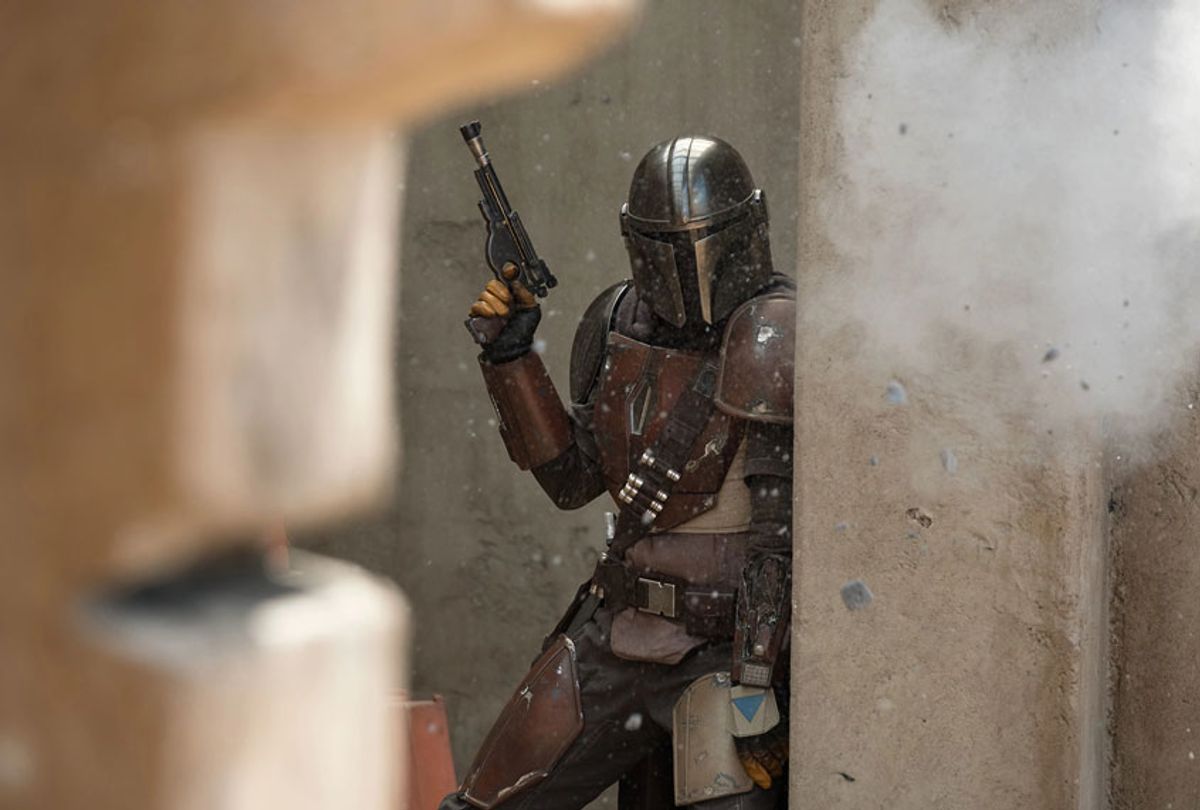 On Monday, upcoming streaming service Disney+ released its second official trailer for the upcoming “Star Wars” TV series “The Mandalorian,” presumably hoping to whet viewer appetites for the new story in advance of the December release of “Star Wars: Episode IX — The Rise of Skywalker.”

The trailer below begins with shots of Stormtrooper helmets on the ground and impaled by sticks while legendary German filmmaker Werner Herzog solemnly asks, “Is the world more peaceful since the revolution?” As Herzog’s character continues to speak, the audience is greeted with shots of Pedro Pascal’s Mandalorian with a bounty who has been frozen in carbonite, fighting some distinctly Star Wars-ian beasties, being dragged behind a TIE fighter and interacting with actors like Giancarlo Esposito as former Imperial governor Moff Gideon and mercenary Gina Carano as Cara Dune. The series will also star Nick Nolte, Carl Weathers, Omid Abtahi, Taika Waititi, Bill Burr, and Julia Jones.

“After the stories of Jango and Boba Fett, another warrior emerges in the Star Wars universe. The Mandalorian is set after the fall of the Empire and before the emergence of the First Order. We follow the travails of a lone gunfighter in the outer reaches of the galaxy far from the authority of the New Republic,” series creator Jon Favreau explained last year. For those unfamiliar with “Star Wars” lore, this means that the series will be set after Episode VI (“Return of the Jedi”) but before Episode VII (“The Force Awakens”), and could presumably flesh out what happened between those two films as the New Republic disintegrated and was eventually replaced by the fascistic First Order.

Favreau, who will serve as executive producer for the series as well as serve a writing role, has a long track record of successes for both Disney and Marvel Studios (back when the comic book behemoth had not yet been acquired by Disney). He directed the 2008 film “Iron Man,” which kicked off the Marvel Cinematic Universe, as well as its 2010 sequel “Iron Man 2.” He also helped begin the trend of live-action adaptations of classic Disney animated films with his “The Jungle Book” remake in 2016, one that he followed up with a successful remake of “The Lion King” earlier this year.

“The Mandalorian” will have it work cut out for it as it attempts to revive a “Star Wars” brand that many fans feel has qualitatively suffered in recent years. The 2017 movie “The Last Jedi,” which served as Episode VIII in the series, proved very divisive, while the 2018 standalone film “Solo” (which was panned by Salon) flopped at the box office. As a result, “The Mandalorian” will need to be popular among fans in order to revive the “Star Wars” franchise’s good name and lay the foundation for the final installment in the trilogy of trilogies, “The Rise of Skywalker,” to make bank at the box office.

“The Mandalorian” will be released when the new Disney+ streaming service launches on Nov. 12.