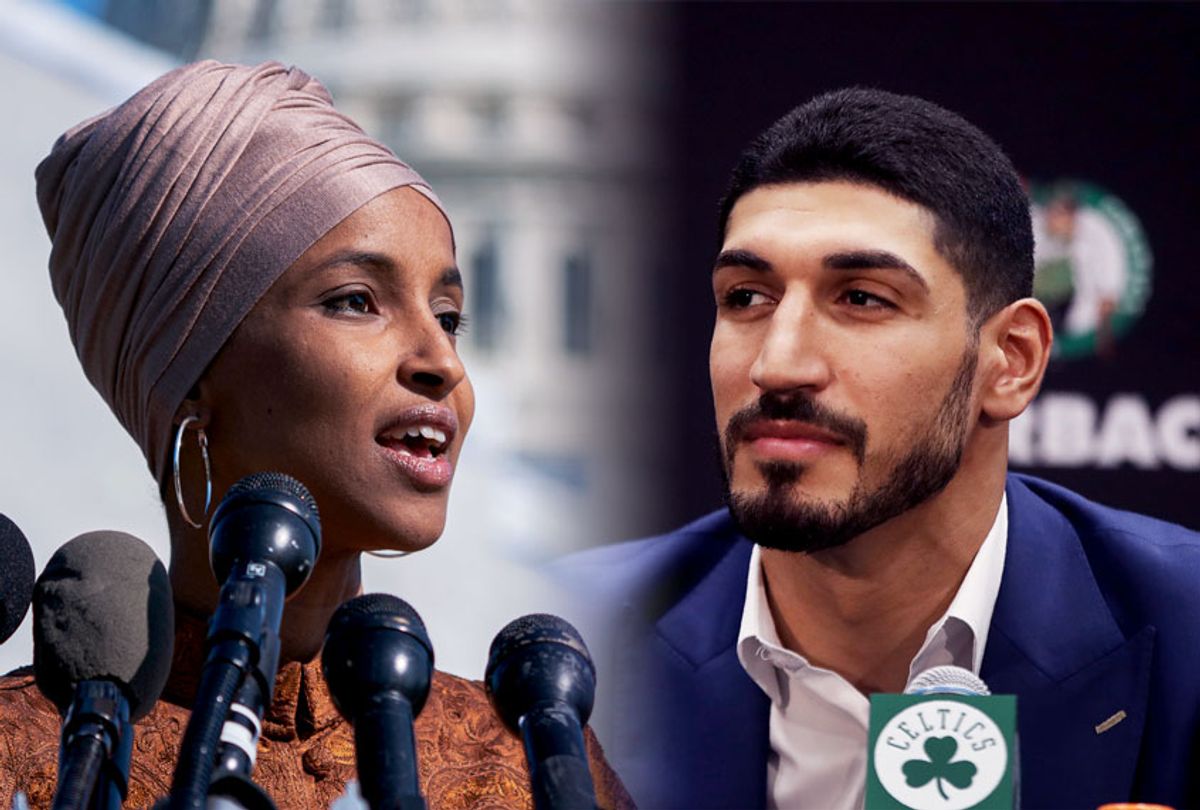 Boston Celtics center Enes Kanter, who was born in Switzerland but is of Turkish descent, harshly criticized Rep. Ilhan Omar of Minnesota on Tuesday for being the only Democrat to vote against a bill which would impose sanctions on Turkish President Recep Erdoğan.

“What an absolute disappointment and shame that the only democrat who did NOT support the Turkish bill aiming to stop the killing of innocent people is @IlhanMN who seems like on #DictatorErdogan ‘s payroll working for his interests, but not for the American people and democracy!” Kanter wrote on Twitter.

Kanter has written in the past about how he has been targeted by Erdoğan’s strongman regime because of his outspoken criticisms of the Turkish government. In 2017, he wrote a personal essay in The Players’ Tribune discussing how he had been targeted for arrest by the Erdoğan government.

“Anyone who goes against him or says anything against his government is a target,” Kanter wrote. “Don’t take my word for it. You can just read the news. You can ask Amnesty International.”

He later added that “I share my thoughts on Twitter and Facebook about the terrible things that are being done to people in Turkey. I want the whole world to know about the human rights abuses that are going on there. To the Erdoğan government, this makes me a dangerous man.”

And Kanter is not the only NBA player to recently make news regarding his stances on foreign affairs. Earlier this month LeBron James, the power forward for the Los Angeles Lakers, told reporters he disagreed with Houston Rockets general manager Daryl Morey for criticizing the Chinese government by saying he “wasn’t educated on the situation at hand.”

“So many people could have been harmed not only financially, but physically, emotionally, spiritually,” James added.

The crisis in Turkey has also caused political controversy. After President Donald Trump announced that he was pulling American troops out of Syria and abandoning America’s Kurdish allies to the Turkish military, Sen. Lindsey Graham of South Carolina — a Republican who usually supports the president — told “Fox & Friends” that “this impulsive decision by the president has undone all the gains we’ve made — thrown the region into further chaos. Iran is licking their chops.”

He added, “And if I’m an ISIS fighter, I’ve got a second lease on life. So to those who think ISIS has been defeated, you will soon see.”

Trump later defended his decision to pull American troops out of Syria, arguing that the conflict between Turkey and Syria is “not our problem” and that America’s Kurdish allies were “not angels.” He also said that “it’s not our border. We shouldn’t be losing lives over it.”

Critics of the president on foreign policy have called attention to the fact that he opened two conjoined Trump Towers in the Turkish capital of Istanbul back in 2012. Erdoğan has previously used Trump’s investment in those towers to pressure him on foreign policy. After he ordered Trump’s name to be taken off of the towers following the future president’s call for a Muslim ban in 2016, Trump supported the autocrat’s crackdown on an unsuccessful coup attempt. Erdoğan subsequently dropped his call for renaming the towers in question.

You can watch Salon’s interview with Kanter below: