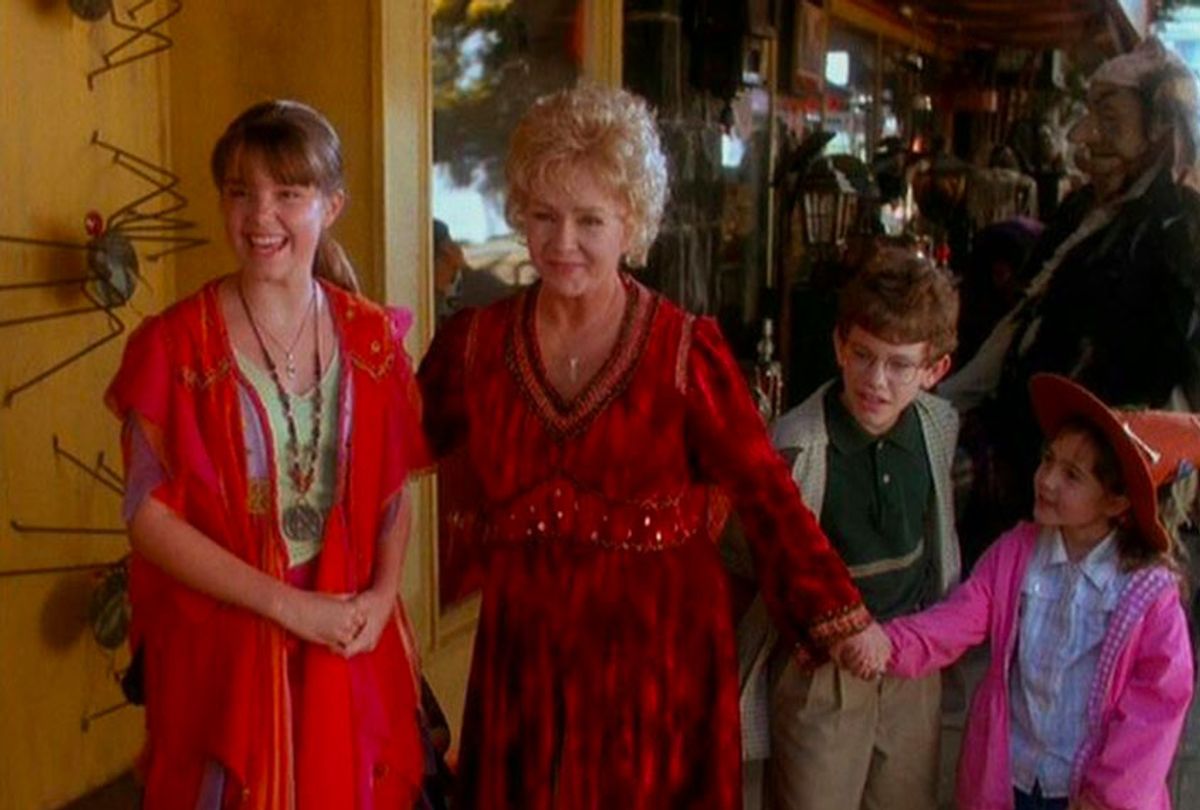 From a $104 Funko POP! figurines set and flimsy party plates, to sweatpants with the phrase “Another glorious morning, makes me sick” screenprinted on the leg, “Hocus Pocus” is everywhere. In the 26 years since the film was first released, it’s transitioned — like many beloved movies do — from a box office and critical flop to a recognized cult classic. It’s now basically “The Christmas Story” of Disney’s Freeform, with daylong marathons and a TV sequel already  confirmed to air on Disney+, the company’s upcoming streaming platform.

And I get it. I deeply love Halloween, but I’m not a huge horror fan; this movie — scored by not one, but two versions of “I Put A Spell On You” — hits a campy sweet spot. Bette Midler is an obvious delight. There are some solidly quotable lines like, “Couldn't you forget about being a cool teenager just for one night?” and “Winnie, I smell a child,” (which also doubles as a popular maternity shirt slogan).

But I think it’s only natural that oversaturation can beget contempt. Just a touch, of course — though I am increasingly (irrationally) irritated by the “Amuck, Amuck, I’m drunk” wine tumblers and “Baby likes your yabos” onesies. So this year, I turned to a sadly overlooked alternative: “Halloweentown.”

Released in 1998, this Debbie Reynolds-led Disney Channel Original Movie covers some of the same ground as “Hocus Pocus,” with its camp, its cast of spirited witches, and its teenage protagonist.

But where “Hocus Pocus” can feel a little aimless — vacillating at times between pablum and an odd sex and virginity-obsessed vibe — “Halloweentown” has an endearing, enduring message for anyone who has ever felt like they didn’t belong in the real world.

To that end, we open on Marnie Piper (Kimberly J. Brown) as she begs her mom, Gwen (Judith Hoag), to allow her to go trick-or-treating. Gwen absolutely refuses, telling Marnie that there are “just some things about Halloween that you don’t understand.”

“It does feel a little unfair,” one of Marnie’s friends pipes up. “I mean seeing as Marnie likes weird stuff so much.” Weird stuff being witches, skeletons, ghosts — all of which Marnie spends her math class period doodling in the margins of her notes.

But Gwen isn’t budging, and Dylan — Marnie’s younger, desperately nerdy brother whose entire wardrobe seems to consist of short-sleeved plaid button-ups — takes a break from his book to chime in about all the ways that Halloween is a dangerous and unhealthy holiday. Meanwhile, their 7-year-old sister Sophie is in the kitchen and uses mysterious powers to obtain a chocolate chip cookie despite her mother's wishes. Viewers now have an idea about what kind of things Marnie may not understand about Halloween.

When a flying city bus emerges from the sky, Debbie Reynolds has arrived. She sports an iconic oxblood cloak and beckons for her luggage — a carpet bag that whimpers like a small dog — to follow.  She’s Gwen’s mother, Aggie Cromwell, and a a witch (a role she obviously relishes in playing.  Aggie reminds Gwen that this is Marnie’s 13th Halloween — apparently a big year in the Disneyfied witchcraft community presented in this movie — and that if she doesn’t start training, she’ll lose her powers forever.

But this isn’t the only reason for Aggie's visit. There’s a strange evil force that is turning the otherwise delightful Halloweentown residents — monsters and spirits who want to live relatively quiet lives away from judgement — into hateful ghouls. Aggie needs another Cromwell witch to aid in fighting the darkness. Although Gwen refuses, Margie is listening outside the door. You can guess what happens next.

“Halloweentown” isn’t a movie of too many unusual twists — certainly not the shocker of the season — but it is imbued with a certain nuanced whimsy that should earn it a place as an annual rewatch. I think of Aggie's pack of “instant witches brew,” her microwave with "BUBBLE," "TOIL," and "TROUBLE"  buttons, and a helpful skeleton cabbie who speaks with a strong Bronx accent.

But the most endearing throughline of “Halloweentown” is in its message of finding one’s identity, and how this is an ongoing quest, rather than one that magically disappears after adolescence. In the end, reckoning with that reality is what propels good over evil.

So take a break from the incessant “Hocus Pocus” reruns and give “Halloweentown” the chance it deserves. I’m not sure how many other people out there will do it, but as Aggie Cromwell says, “being normal is vastly overrated.”

"Halloweentown” will air on the Disney Channel at 8:20 p.m. EST on Oct. 31, can be watched for free on Disney Now, and is available for rent/purchase on both Amazon and YouTube.