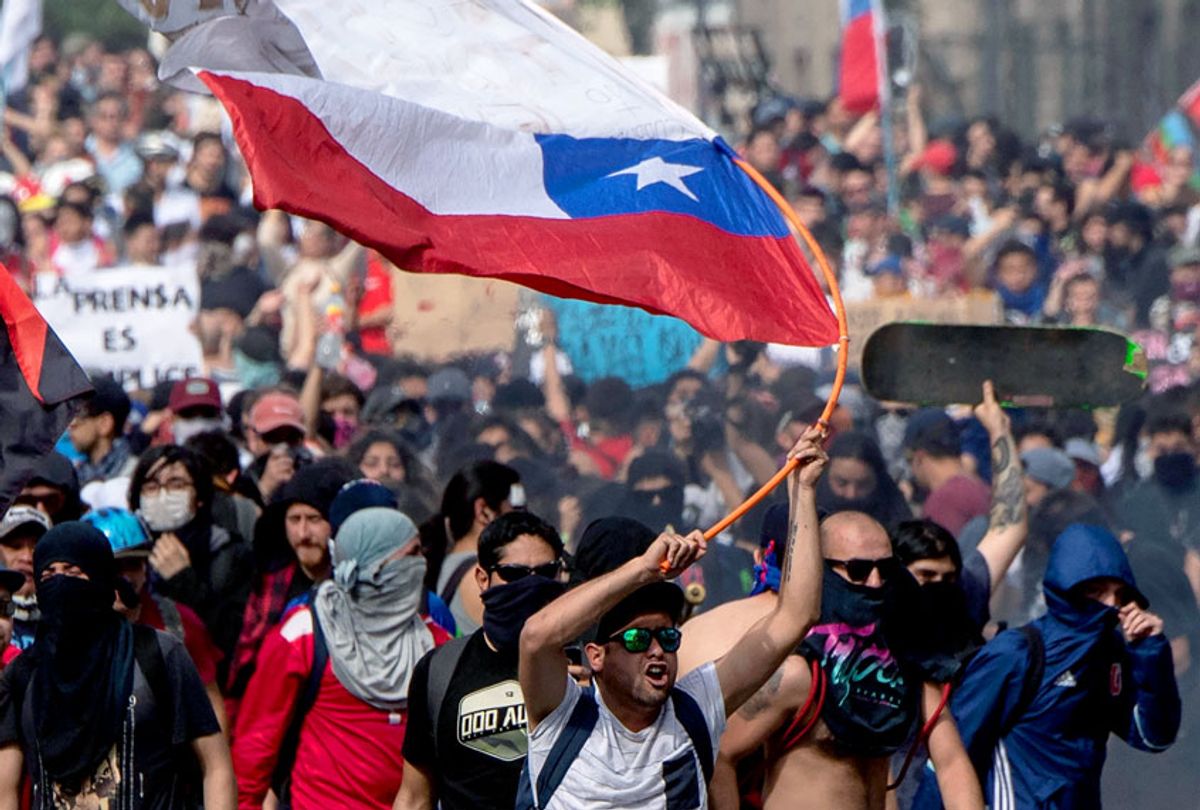 People demonstrate at Plaza Italia on the fifth straight day of street violence which erupted over a now suspended hike in metro ticket prices, in Santiago on October 22, 2019. - President Sebastian Pinera convened a meeting with leaders of Chile's political parties on Tuesday in the hope of finding a way to end street violence that has claimed 15 lives, as anti-government campaigners threatened new protests. (PEDRO UGARTE/AFP via Getty Images)
--

It’s all kicking off everywhere in 2019. Haitians are revolting against a corrupt political system and their President Jovenel Moïse, who many see as a kleptocratic U.S. puppet. In Ecuador, huge public manifestations managed to force President Lenín Moreno to backtrack on his IMF-backed neoliberal package that would have sharply cut government spending and increased transport prices (FAIR.org, 10/23/19).

Meanwhile, popular Chilean frustration at the conservative Piñera administration boiled over into massive protests that were immediately met with force. “We are at war,” announced President Sebastián Piñera, echoing the infamous catchphrase of former fascist dictator Augusto Pinochet. Piñera claimed that those responsible for violently resisting him were “going to pay for their deeds” as he ordered tanks through Santiago. (See FAIR.org, 10/23/19.)

Yet the actions that have by far received the most attention in corporate media are those in Hong Kong, where demonstrations erupted in response to a proposed extradition agreement with the Chinese central government that opponents felt would undermine civil liberties and Hong Kong’s semi-autonomous status. A search for “Hong Kong protests” on Oct. 25 elicits 282 responses in the last month in the New York Times, for example, compared to 20 for “Chile protests,” 43 for Ecuador and 16 for Haiti. The unequal coverage is even more pronounced on Fox News, where there were 70 results for Hong Kong over the same period and four, two and three for Chile, Ecuador and Haiti, respectively.

This disparity cannot be explained due to the protests’ size or significance, the number of casualties or the response from the authorities. Eighteen people have died during the ongoing protests in Haiti, 19 (and rising) in Chile, while in Ecuador, protesters themselves captured over 50 soldiers who had been sent in as Moreno effectively declared martial law. In contrast, no one has been killed in Hong Kong, nor has the army been called in, with Beijing expressing full confidence in local authorities to handle proceedings. The Chilean government announced it had arrested over 5,400 people in only a week of protests, a figure more than double the number arrested in months of Hong Kong demonstrations (Bloomberg, 10/4/19). Furthermore, social media have been awash with images and videos of the suppression of the protests worldwide.

One way of understanding why the media is fixated on Hong Kong and less interested in the others is to look at who is protesting, and why. 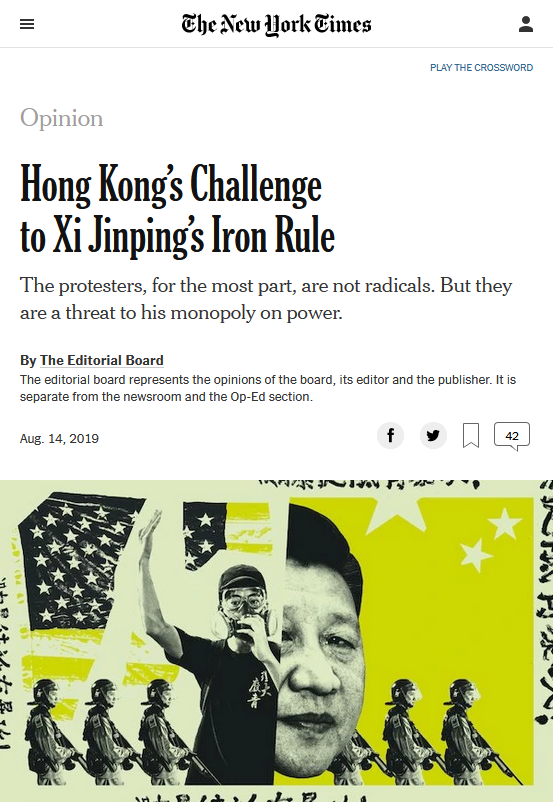 Over 30 years ago, in their book "Manufacturing Consent," Edward Herman and Noam Chomsky developed their theory of worthy vs. unworthy victims to explain why corporate media cover certain stories and why others are dropped. They compared the media coverage of a single murdered priest in an enemy state (Communist Poland) to that of over 100 religious martyrs, including some U.S. citizens, murdered in Central American client states over a period of two decades. They found that not only did the New York Times, Time, Newsweek and CBS News dedicate more coverage to the single priest’s assassination, the tone of coverage was markedly different: In covering the killing of Father Jerzy Popieluszko, media expressed indignation, demanding justice and condemning the barbarism of Communism. The killings of religious figures in Central America by pro-U.S. government groups, on the other hand, were reported in a matter-of-fact manner, with little rhetorical outrage.

In other words, when official enemies can be presented as evil and allies as sympathetic victims, corporate media will be very interested in a story. In contrast, they will show far less enthusiasm for a story when the “wrong” people are the villains or the victims.

On Hong Kong, the New York Times has published three editorials (6/10/19, 8/14/19, 10/1/19), each lauding the “democracy-minded people” fighting to limit “the repressive rule of the Chinese Communists,” condemning the Communist response as evidence of the backward, “brutal paternalism of that system,” in which China “equates greatness with power and dissent with treachery.” Hong Kong, on the other hand, thanks to the blessing of being a former British colony, had acquired “a Western political culture of democracy, human rights, free speech and independent thought.” (The Times has not elected to publish any editorials on the other protests.)

The Times also ridiculed the idea that “foreign forces” (i.e., the U.S. government) could be influencing the protests, calling it a “shopworn canard” used by the Communist government. Yet the U.S. National Endowment for Democracy (NED) has officially poured over $22 million into “identifying new avenues for democracy and political reform in Hong Kong” or China since 2014. The Times editorials did not mention this funding as possibly complicating their dismissal of foreign involvement in the Hong Kong protests as a “canard.” 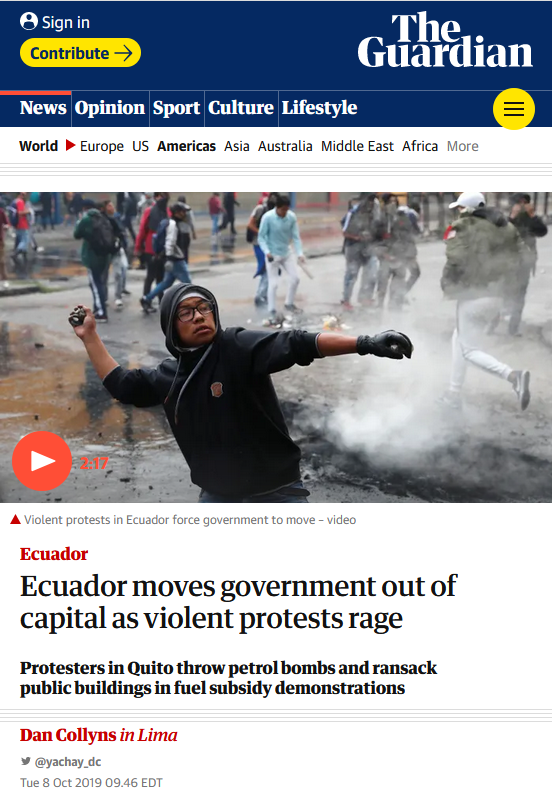 In the cases of the less-covered protests, the “wrong” people are protesting and the “wrong” governments are doing the repressing. As the Washington Post (10/14/19) noted on Haiti,

One factor keeping Moïse in power is support from the United States. US officials have been limited in their public comments about the protests.

On Ecuador, the State Department has been more forthcoming, issuing a full endorsement of Moreno’s neoliberal austerity package:

The United States supports President Moreno and the Government of Ecuador’s efforts to institutionalize democratic practices and implement needed economic reforms…. We will continue to work in partnership with President Moreno in support of democracy, prosperity, and security.

In other words, don’t expect any angry editorials denouncing U.S. client states like Haiti or Ecuador, or arguing that the Chilean government’s repression of its protest movement shows the moral bankruptcy of capitalism. Indeed, corporate media (e.g., Guardian, 10/8/19; CNN, 10/8/19; USA Today, 10/10/19) emphasized the violence of the Ecuadorian protesters while downplaying Hong Kong’s — the New York Times (6/30/19) even inventing the phrase “aggressive nonviolence” to describe the Hong Kong protesters’ actions, so eager was it to frame the demonstrations against China as unquestionably laudable.

Which protest movements interest corporate media has little to do with their righteousness or popularity, and much more to do with whom they are protesting against. If you’re fighting against corporate power or corruption in a U.S. client state, don’t expect many TV cameras to show up; that revolution is rarely televised.