The secret to growing giant pumpkins

Pumpkins can be 1 pound or 2,000 pounds. But to grow the really big ones, you'll have to learn from the masters 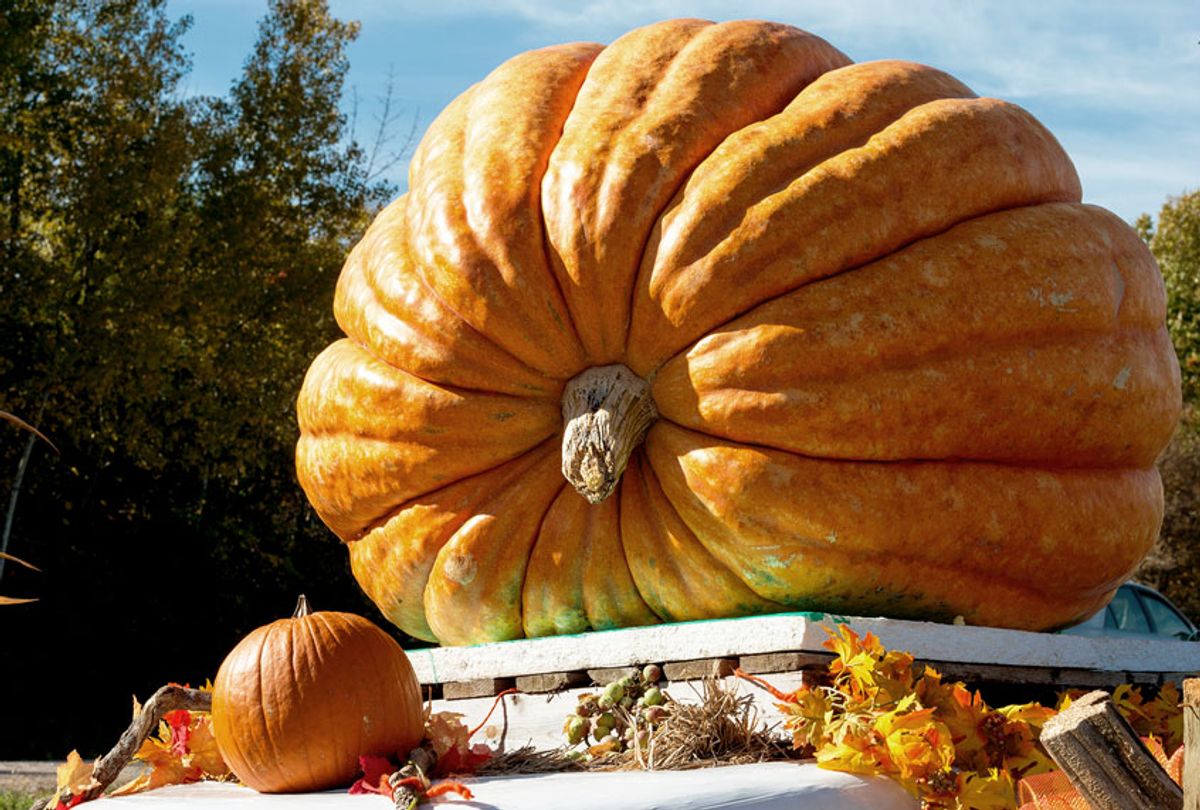 Giant pumpkin grown by local farmers weights 930 lbs on display at roadside out of a small village in Canada before Halloween. (Getty Images/Jun Zang)
--

October is a big month for California farmers. It's harvest season. It's fire season. It's also pumpkin season. And for those gardeners and farmers who participate in the annual Safeway World Championship Pumpkin Weigh-Off in Half Moon Bay, it is time to show off the biggest fruit of their labor: a giant pumpkin.

This year, Leonardo Ureña from Napa Valley won the contest, and its accompanying hefty financial reward. The prize awards the winner $7 per pound of pumpkin; Ureña's winning gourd clocked in at 2,175 pounds, netting him $15,225 for his one-ton pumpkin, plus another $1,000 for setting a new California record.

The contest is perhaps the most famous of its kind. As Ureña told The Sacramento Bee, it "is like the Kentucky Derby," of giant pumpkin contests.

Growing giant gourds is a relatively new hobby for farmers and gardeners. The story, according to a Time magazine article, is that in 1979, a farmer in Nova Scotia named Howard Dill grew a very large pumpkin and brought it to a fair near Philadelphia that was holding a weigh-off. His 438.5-pound Lilliputian won first place. At the time, it was a silly thing to do: bring a giant pumpkin to a contest to win a prize. The next year, his pumpkins were even bigger, the next year even bigger — which led to the beginning of the strain of now-famous giant pumpkin seeds known as the Dill's Atlantic Giant.

Pumpkins are an unusually size-variant fruit. (Yes, scientifically speaking, they are fruits, though most don't think of them that way.) Three orders of magnitude separate the tiny, sub-1 pound ornamental pumpkins and the 2,000 pound whoppers like Ureña's. Likewise, the pumpkins of centuries past were much smaller and bitter.  So how have they been able to grow into one-ton fruits, and nearly quadrupled in size since 1979?

First, humans played a part in creating the big ones — naturally-occurring pumpkins are never as large as the modern award-winning ones. Archaeologists discovered the oldest domesticated pumpkin seeds in Mexico, which date back to somewhere between 7000 and 5550 B.C. Native Americans ate and used gourds for millennia before European colonizers took to them. According to PBS, the first American pumpkin recipes appear in John Josselyn's book "New-England's Rarities Discovered," published in the 1670s, and which was the first book to identify New England animal and plant life.

Zachary Lippman, a professor of plant biology at Cold Spring Harbor Laboratory, told Salon via email that growing giant pumpkins has more to do with nature than nurture. Seeds that have been bred from giant pumpkins carry the genetic code for enormity.

"The way people push giant pumpkins to get so big is to start with superior genetics (seeds with giant pumpkin potential from previous generations of breeding)," Lippman said. "Lay over that an intense growth program . . . . and pruning of the plant and culling of smaller fruits [to] let the largest ones grow," he added. "There is more to the nurture part, but many giant pumpkin growers have their own 'recipe' for nurturing, if you will."

As far as genetics go, Lippman said the DNA of squash is not unique compared to other squash or plants generally. "Plant DNA shares many, but not all the same genes," he said. "That said, [pumpkin DNA] is certainly unique in the same way that my DNA has thousands or even millions of unique features (what we call mutations or polymorphisms) compared to your DNA," Lippman said. 'So in that respect squash DNA is unique. . . . but again, lots of DNA is shared."

In 2017, scientists at Boyce Thompson Institute (BTI) and the National Engineering Research Center for Vegetables in Beijing sequenced the genomes of two pumpkin species, Cucurbita maxima and Cucurbita moschata. They found that the pumpkin's genome is a combination of two ancient genomes from 3 to 20 million years ago, which make it a paleotetraploid — meaning it has four copies of each chromosome. However, pumpkin is considered a diploid today, which means it only has two copies of each chromosome.

"We were excited to find out that the current two subgenomes in pumpkin largely maintain the chromosome structures of the two progenitors despite sharing the same nucleus for at least three million years," Shan Wu, an author of the findings, said in a media statement.

Lippman said that when it comes to squash varieties, of which there are hundreds, their chromosomes and DNA content are similar enough to allow for them to be interbred.

"Many squash varieties are designated as distinct species but they can interbreed because their chromosomes (number) and DNA (content) are still similar enough for intercrossing and for the extremely important process of meiosis (making gametes) in the following generations after the intercross," Lippman said. "If the chromosomes are too different, especially in number, then crosses are typically not possible."

Interestingly, growing a one-ton fruit (or larger) is not a feat genetically limited to pumpkins.

"Most fruits can be bred to be larger and larger," Lippman said. "In fact, it is that exact process and goal for many crops that was responsible for domesticating wild plants to the crops that now feed us all."

He added that almost all ancestors of today's fruit crops were tiny berries or fruits.

"Now, can they get even bigger, up to a point probably yes, but then the genetics gets tapped out and the nurture can only do so much before the plant says, 'Hey, you're getting as much as you can out of me,'" Lippman said.

Perhaps that is where nurture comes in for the giant pumpkins. Lippman said the giant ones can grow 30 pounds per day or more during peak growth, if the grower puts in the proper time and labor necessary to keep the pumpkin happy.

Indeed, Ureña explained to the Sacramento Bee that a grower has "to kind of babysit" the giant pumpkin since the day it's born. He also believes in having conversations with them.