Warning of the pick's LGBTQ views, the ABA cited colleagues who called him "arrogant" and "lacking in knowledge" 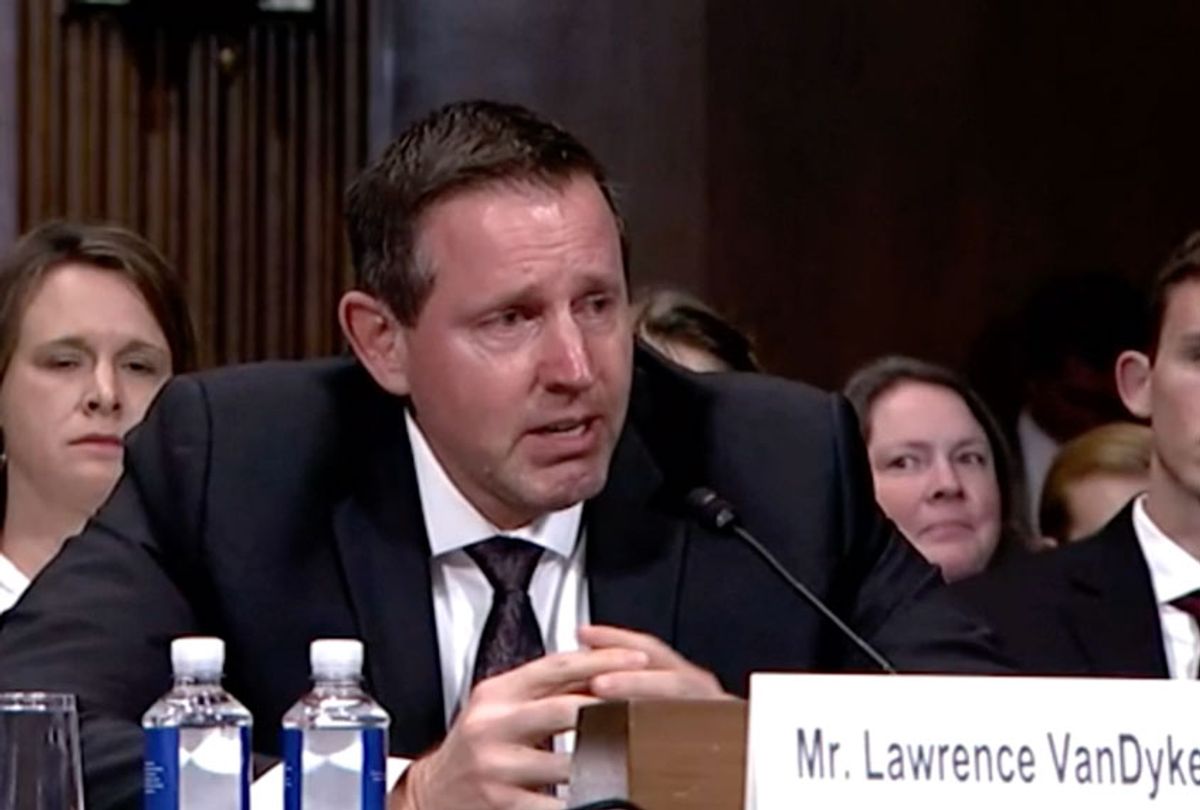 A Trump judicial nominee broke down in tears Wednesday during his confirmation hearing before the Senate Judiciary Committee over scathing criticism from the American Bar Association aimed at his anti-LGBTQ views.

The Bar Association (ABA) issued a strongly-worded statement declaring Lawrence VanDyke “not qualified” to serve on the Ninth Circuit Court of Appeals. In a letter sent to the heads of the Judiciary Committee, the ABA stated that VanDyke’s “accomplishments are offset by the assessments of interviewees that Mr. VanDyke is arrogant, lazy, an ideologue and lacking in knowledge of the day-to-day practice including procedural rules.”

The letter, based on 60 interviews, cited colleagues who accused VanDyke of lacking humility, having an “’entitlement’ temperament’” and an inconsistent “commitment to being candid and truthful.” The letter went on to say that VanDyke “would not say affirmatively that he would be fair to any litigant before him, notably members of the LGBTQ community.”

VanDyke, who currently serves as deputy attorney general for the Justice Department’s Environment and Natural Resources division, broke down in tears when Sen. Josh Hawley, R-Mo., asked him if it was true.

“Senator, that was the part of the letter . . .” VanDyke began before being overcome with emotion.

“I did not say that,” he said as he struggled to regain his composure. “I do not believe that. It is a fundamental belief of mine that all people are created in the image of God, and they should all be treated with dignity and respect.”

VanDyke then alleged that the ABA interviewer rushed through his interview.

But Democrats on the committee cited multiple instances when VanDyke opposed LGBTQ rights.

Sen. Dianne Feinstein, D-Calif., the top Democrat on the committee, pointed out that VanDyke supported a same-sex marriage ban when he served as solicitor general of Nevada. Sen. Pat Leahy, D-Vt., cited a 2004 op-ed written by VanDyke in which he claimed that same-sex marriage would “hurt families, and consequentially children and society.”

“My personal views have definitely changed since 2004,” VanDyke told Leahy.

Leahy said that he had never seen a letter like the ABA’s VanDyke criticism in his entire congressional career.

The Justice Department defended VanDyke in a statement to The Washington Post, touting his “long record of public service and his extensive litigation experience.”

“And as today’s hearing confirmed, Mr. VanDyke is deeply committed to the rule of law and to treating all people fairly,” the statement added.

Republican lawmakers responded to the criticism from the ABA by accusing it of political bias. Sen. Ted Cruz, R-Tex., accused the organization of “behaving as a partisan mouthpiece.” Mike Davis, a former aide to then-Judiciary Chairman Chuck Grassley who now heads the Article III project, which supports Trump’s judicial nominees, told CNN that the ABA is a “liberal dark-money group” and their process for evaluating nominees is “fatally flawed” and “oftentimes results in unfair hits on conservative judicial nominees.”

Republicans claimed that the ABA has a Democratic bias, but Trump has already appointed nearly 160 federal judges. Only six of those drew a “not qualified” rating from the ABA.

The ABA, for its part, denied any bias toward conservatives.

“The evaluations are narrowly focused, nonpartisan, and structured to assure a fair and impartial process,” William Hubbard, the chair of the ABA’s Standing Committee on the Federal Judiciary, said in a statement to The Post. He added that 97 percent of Trump’s 264 nominees had earned a “qualified” or “well qualified” rating and that the committee’s work was “independent” of any other activities at the ABA.

“I can’t help but notice that colleagues on both sides of the aisle don’t hesitate to herald the ABA process when it is supportive of a nominee that they would like to see get on the court,” he said.

VanDyke is not the only nominee who drew criticism from the ABA. Sarah Pitlyk, who was nominated as a judge for the Eastern District of Missouri after working for a firm that battled Planned Parenthood, also drew a “not qualified” rating from the ABA. Her confirmation vote is scheduled for Thursday.

“Ms. Pitlyk's experience to date has a very substantial gap, namely the absence of any trial or even real litigation experience,” the ABA said. “Ms. Pitlyk has never tried a case as lead or co-counsel, whether civil or criminal. She has never examined a witness. Though Ms. Pitlyk has argued one case in a court of appeals, she has not taken a deposition. She has not argued any motion in a state or federal trial court. She has never picked a jury. She has never participated at any stage of a criminal matter."