It’s about the oil, stupid: Trump wants to end the forever wars, except the one about oil and money

"I still can't believe we left Iraq without the oil," Trump told us in 2013. Now he wants to correct that mistake 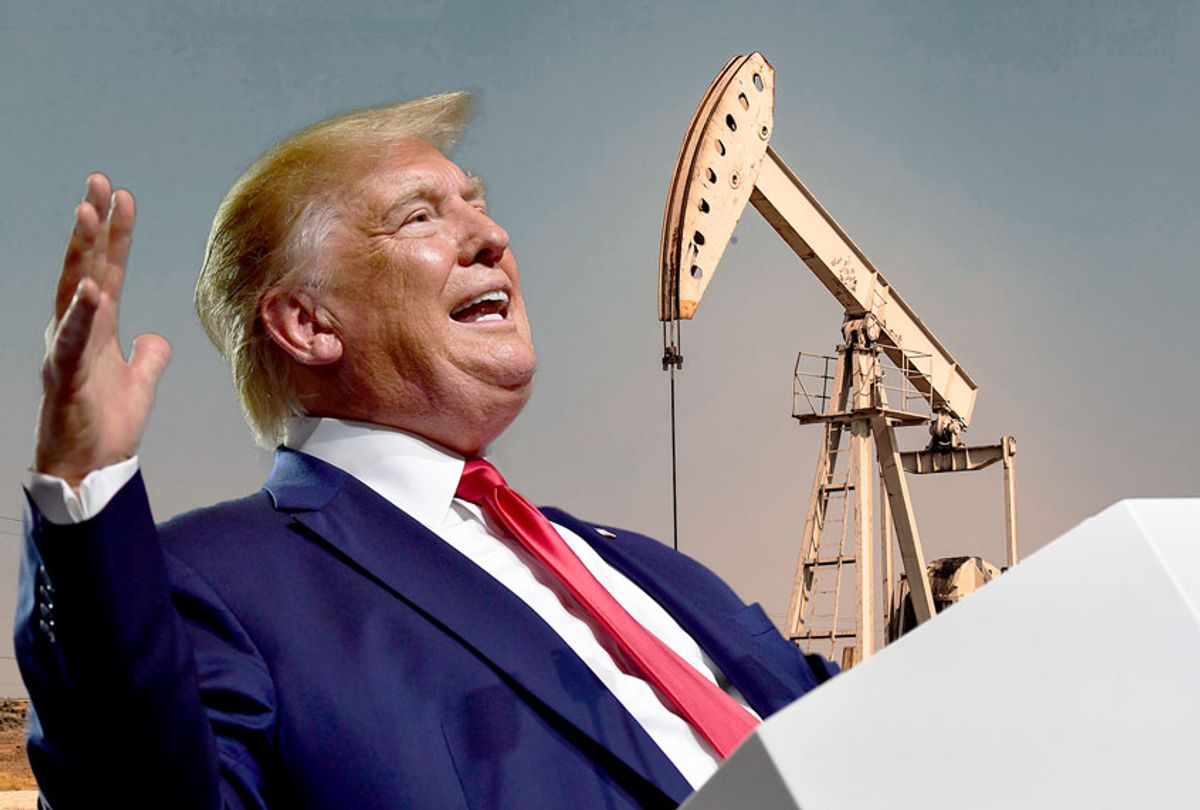 It was about anything at all except the oil, even after it was revealed that the first thing Vice President Dick Cheney did at the very first meeting of the Bush cabinet after he took office was to pass around a map of Iraq showing its oil reserves divided up between major United States oil companies. This was in February of 2001, months before the attacks of 9/11, and more than two years before the first American units would cross the Kuwait border in the invasion of Iraq.

Oil had nothing to do with it, we were told. Our hands were clean. Our motives were pure.

One guy knew better. Donald Trump. He tweeted back in 2013, “I still can’t believe we left Iraq without the oil.” “It used to be, ‘To the victor belong the spoils,’” he said at a “commander in chief forum” in New York during the campaign in 2016. “Now, there was no victor there, believe me. There was no victor. But I always said: take the oil.”

Axios reported last year that Trump brought up Iraq’s oil in a 2017 meeting with Iraqi Prime Minister Haider al-Abadi. “So what are we going to do about the oil?” Trump suddenly blurted out. Al-Abadi replied, “What do you mean?,” To which Trump said, “Well, we did a lot, we did a lot over there, we spent trillions over there, and a lot of people have been talking about the oil.” According to Axios, “Al-Abadi, explaining in what we assume was his best talking to a small child or very large idiot voice, reportedly responded, ‘Well, you know Mr. President, we work very closely with a lot of American companies and American energy companies have interests in our country.’”

Well, Trump is at it again, this time with more than campaign rhetoric or casual asides at meetings with Middle Eastern leaders. “We have taken it and secured it,” Trump said of Syria’s oil during remarks at the White House last Sunday, when he announced the killing of Abu Bakr al-Baghdadi, according to The New York Times. Latest reports are that after having moved about 1,000 troops out of northern Syria so Turkey could invade the region and create a so-called “buffer zone,” Trump is moving 900 troops back into northeastern Syria to “secure” the oil. “We may have to fight for the oil. It’s OK,” he said later. “Maybe somebody else wants the oil, in which case they have a hell of a fight. But there’s massive amounts of oil.” We might have missed our chance to take Iraq’s oil, but Trump has a plan for the oil we’re going to “secure” in Syria. “What I intend to do, perhaps, is make a deal with an ExxonMobil or one of our great companies to go in there and do it properly,” he said.

Former military commanders and international law experts agree that “taking” oil from Syria or anywhere else violates the Geneva Conventions, the basic international treaty on the laws of war. “Trump comment US intends to keep the oil in Syria. Guard with US armored forces. Bring in US oil companies to modernize the field,” Gen. Barry McCaffrey tweeted. “WHAT ARE WE BECOMING.... PIRATES? If ISIS is defeated we lack Congressional authority to stay. The oil belongs to Syria.”

“Oil, like it or not, is owned by the Syrian state,” said Brett McGurk, Trump’s former top official in the war against ISIS. According to The New York Times, “Mr. McGurk said that Mr. Trump’s first secretary of state, Rex W. Tillerson, had studied the issue and concluded there was no practical way for the United States to monetize its control over oil-rich areas.”

“Maybe there are new lawyers now, but it was just illegal for an American company to go and seize and exploit these assets,” Mr. McGurk said at a panel hosted on Monday by the Foundation for Defense of Democracies.

Trump is going to discover that there are other interests who have a voice in what happens to the oil beneath the sands of the Middle East. And he’s dreaming if he thinks 900 American soldiers can protect the oil fields of northeastern Syria. According to a story in The New Yorker by Robin Wright, who has been to the Syrian oil fields, production is already off significantly. “At its peak, Syria produced less than four hundred thousand barrels a day, which generated about a quarter of government revenues. But, as a result of the eight-year civil war and U.S. air strikes on oil installations seized by ISIS, production is down ninety per cent, to only about forty-thousand barrels per day,” Wright reported.

The recent Iranian drone attacks on oil production facilities in Saudi Arabia should have taught Trump a lesson: Oil fields are extremely vulnerable targets. The thing about oil is that once it comes out of the ground, it is wildly flammable. Remember what the Iraqi military did to Kuwait’s oil fields when were driven out during the first Gulf War? They lit half the country on fire. And even if you can get it out of the ground, oil must be transported either to coastal oil terminals for export or must be refined into gasoline and diesel fuel and other salable products. That means it must travel through pipelines or be carried overland in trucks. Either way, it’s vulnerable to attack by insurgents who may have other ideas about what should happen to Syria’s oil.

If Trump thinks ExxonMobil or any other American oil company can just move into Syria and start pumping oil and making profits, he’s dreaming. But the upside of his fantasy about “taking” Syria’s oil is that he’s showing his true colors. He won’t commit troops to protect American allies like the Kurds, but he’s all-in when it comes to going to war for oil.

Trump is all about one thing: money. He has used his presidency as a source of profits for his family business since the day he was inaugurated, and now he wants to use the bodies of American soldiers so his pals in the oil business can “take” Syrian oil. Trump has finally found a forever war he believes in wholeheartedly: one based on theft and profit.