With "Mrs. Fletcher," "Watchmen" and "See," female climax moves beyond novelty to become part of the story 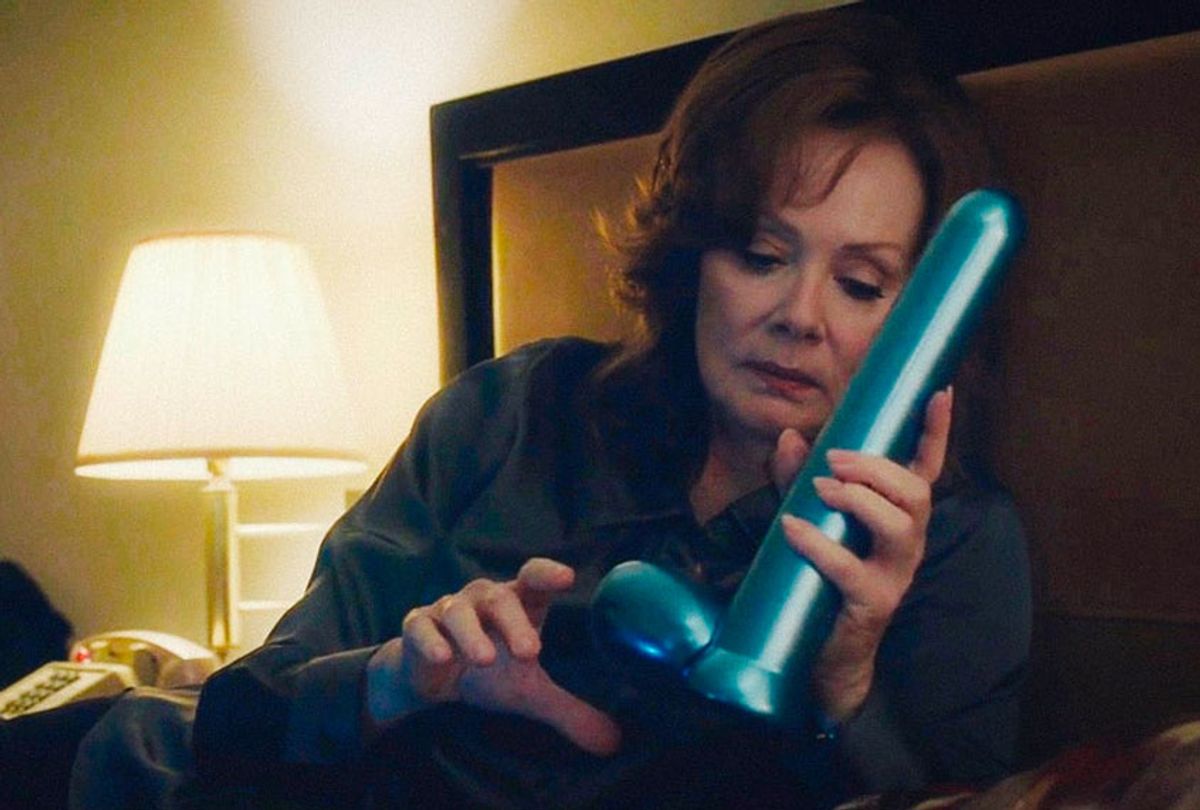 The following contains spoilers of a narrative and sexual nature from "Watchmen" and "Mrs. Fletcher," both on HBO, and the new Apple TV+ series "See."

This past weekend provided a couple of interesting entries into the still-very-brief history of the female orgasm on television. One of them had social media abuzz on Monday morning with the sheer comedic extremity of it, specifically a “Watchmen” scene in which FBI special agent Laurie Blake (Jean Smart) settles in after an exhausting day of field work.

Inside her hotel room she cracks open a locked briefcase — entering the combination of 667 to do so — and reveals the prizes within. One is visual stimulation, a vintage copy of Esquire magazine with an illustration of herself on its cover, wrapped around her old flame, the blue-tinted Dr. Manhattan.

Over on Apple TV+, meanwhile, viewers who got a gander at the Jason Momoa vehicle “See” were introduced to its evil villainess Queen Kane (Sylvia Hoeks), a blind woman who proclaims her divine right to rule and communes with a higher power by ringing her own bell.

In the first episode she declares she needs to pray, then gets busy with her digits. The second time we watch the queen frolic about her undercarriage, a subject is invited into her chambers to facilitate the process face-first.

During this sojourn into inner space, Queen Kane handily reveals her true reason for hunting a heretic roaming her lands. Turns out this man she has proclaimed to be an outlaw used to pray with her like this — twist! She tells this to the darkness, shuddering all the while, howling as she finishes.

Sexuality on television is no major shakes these days. Honest, accurate portrayals of female pleasure, however, are still enough of a novelty that when we see them depicted accurately, in their totality, and beyond the realm of premium cable, it’s worth noting.

Toni Collette made a few headlines when she proclaimed that her character’s on-screen orgasm in the 2018 series “Wanderlust” represents the first time BBC One has aired a scene of a woman climaxing (not so, as “Tipping the Velvet” viewers soon pointed out), but actually it’s sort of old hat by now. “The L Word” drowned out that novelty ages ago, along with “Sex and the City” and after that, the short-lived “Tell Me You Love  Me,” which alarmed critics by daring to show a depiction of a male character’s, ahem, bodily fluids.

In the case of HBO’s “Mrs. Fletcher,” taking her pleasure into her own hands is literally more than half of the entire plot. Once Kathryn Hahn’s empty-nester divorcee Eve no longer has to empty herself into the care of her son, she realizes that she’s spent so much time tending to others’ happiness that she has no knowledge of what brings her joy.

An Internet search or two later, along with the realization that she has the house to herself, allows her to explore new positions and every flavor of kink that makes her tingle, in addition to figuring out what doesn’t. In one particularly funny scene she flails around her living room, laptop nearby, spanking herself and talking dirty out loud . . . to nobody. Yet.

But “Mrs. Fletcher” and “Watchmen” are on HBO, the network that gave us all kinds of after-hours soft-core content and “Game of Thrones,” the series that notoriously inspired the term “sexposition.” The latter exploited female nudity and sexual violence against women to motivate male characters. Eve and Laurie, on the other hand, are women hooked on figuring themselves out first, or so these onscreen displays hint.

Queen Kane, a creation of Steven Knight ("Peaky Blinders"), is an entirely different and more puzzling vision, a woman whose conflation of spirituality and sexuality feels designed to intrigue and bewitch as opposed to serving up a commentary on power.

Then again, evil queens in popular culture are generally depicted as libidinous and dangerous. There’s a reason, for example, that the sensual and sinuous Angelina Jolie was cast as Maleficent as opposed to, say, girl-next-door Amy Adams.

But Hoeks’ wacky woman scorned is on another level: Her orgasms are pure sexposition that, at least in the first three episode of the series, feels gratuitous and slightly sinister. (The second interlude directly follows a murder of a political traitor. What’s sex without a little violence cherry as a topper?)

By way of innuendo, the female orgasm has been referred to in a number of creative ways on television, one of them being “seeing god.” To skirt the nervous Nelsons in broadcast network standards and practices, over the years network television writers have come up with a slew of more creative ways to talk about orgasms and sexual pleasure.

But we all know what Jerry, Elaine, Kramer, and George were talking about during the famous “Seinfeld” episode known as “The Contest.” And unless you’ve intentionally avoided all conversation about “Sex and the City,” you’ve watched Kim Cattrall’s Samantha Jones prioritize this hobby over just about everything else.

We’re betting even Samantha would be impressed by what Laurie Blake has in her toolbox, an intimate aid so gaudy and shiny that the first time she opens the briefcase, it glows like that never-revealed treasure in the case Vincent Vega and Jules Winnfield were guarding in “Pulp Fiction.”

Damon Lindelof is famous for leaving Easter eggs strewn about for eagle-eyed viewers to call out and analyze. Some are MacGuffins, like Quentin Tarantino’s golden glowing prize. But Laurie’s helper is different.

Few lures are more effective in getting the audience’s attention than injecting some sexuality into the mix. The agent's artful vibe is a tool meant to drive viewers to referencing the history of “Watchmen” and that of Laurie who, as the second Silk Spectre, enjoyed a romantic relationship with Dr. Manhattan.

If you aren’t inclined to read the comic or a few Wiki character breakdowns, Dr. Manhattan is blue god-like character best remembered for walking around stark naked with his unit hanging out, with nary a care for this world. The inclusion of Devo’s 1978 single “Space Junk” as a part of Laurie's sensual ritual, which is interrupted at the start of the episode, is a nice tip of the hat to that silliness, as is the revelation that she keeps a pet owl in a cage in remembrance of another lover.

The Owl’s totem gets fed live mice. Dr. Manhattan’s mechanical fetish, the episode (titled "She Was Killed By Space Junk") implies, receives another kind of tribute.

That sex toy, along with Smart’s episode-long joke that she recounts, tells several stories at once, all of them about Laurie:  Laurie was one of the only beings on Earth Dr. Manhattan cared about, but his divinity eventually overpowered his affection. He’s still a part of the “Watchmen” universe, living on Mars and contactable by some magic god phone inside of a gigantic phallus-shaped booth. Maybe he listens to his ex's messages . . . maybe. Who can say? Dr. Manhattan is the ultimate distant lover.

The part of Dr. Manhattan than Laurie could rely on, however, she has replicated and takes with her — and when dialing 667 isn’t enough, she's able to get what she needs with the human next door, a younger co-worker eager to impress his idol.

At any rate, the befuddled, shocked, and aroused viewer may choose to look up the backstory on all of this, or trust what they see in front of them. Either way, it works, and it’s kind of glorious to see a mature female character in this position, played not as someone who is bereft or pining for her lost love, but who has learned to take what she needs from humankind instead of waiting for a hero’s salvation.

That may be a lot of meaning to assign the appearance of a sexual device. But at least it has a more positive reason to be there than those lengthy post-apocalyptic scenes of  a cruel leader grabbing herself by the genitals, simply because when you’re a queen in a blind world, they let you do it.