Trump faces impeachment for chasing conspiracy theories, but Republicans can't stay away from the tinfoil hats 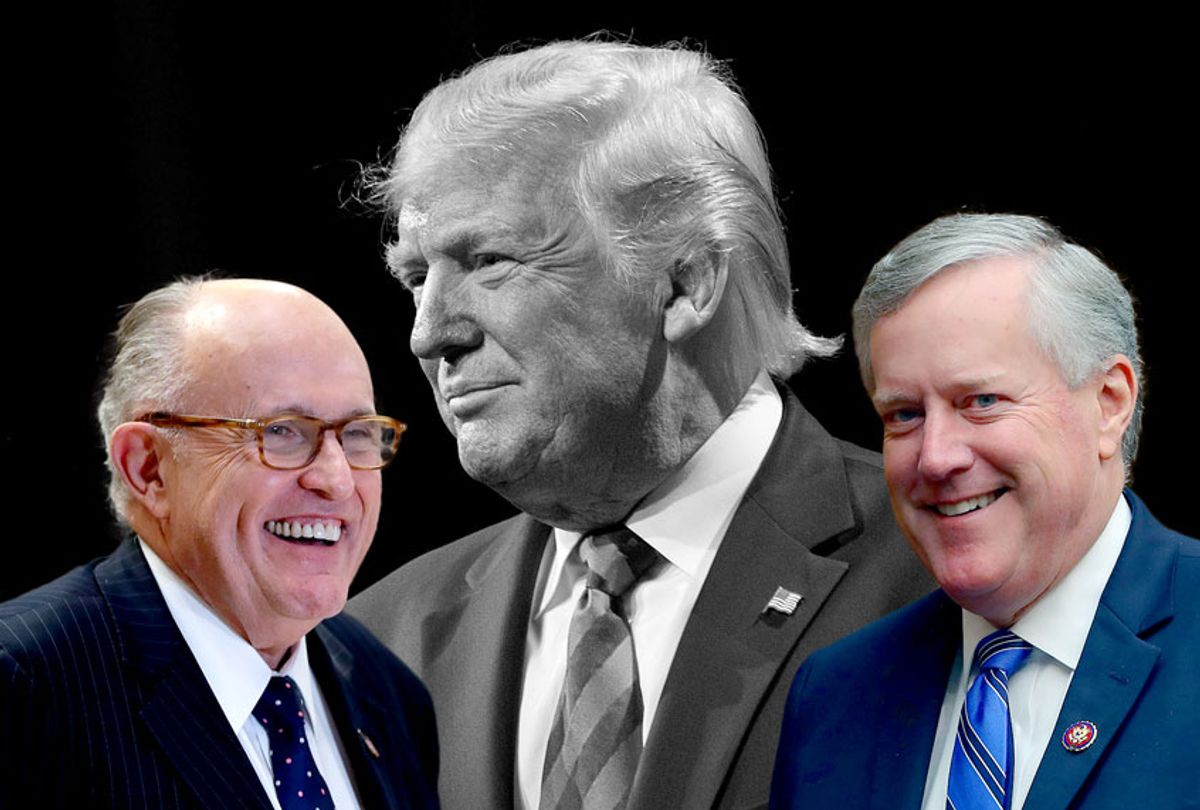 One thing is for certain: If Donald Trump weren't such a stan for outlandish conspiracy theories, he wouldn't be in his current impeachment mess. House Speaker Nancy Pelosi spent most of her first year back in the saddle dismissing calls to impeach Trump for all manner of criminal misbehavior, including his attempts to cover up for a Russian conspiracy to steal from Democratic officials and the fact that the president is openly using his businesses to launder bribes. But because Trump just can't resist trying to shore up his nutty conspiracy theories, he basically forced Pelosi to give in and start the impeachment inquiry.

That is, after all, what Trump was trying to get out of Ukrainian President Volodymyr Zelensky during the lengthy extortion scheme he was running, with the help of Rudy Giuliani and EU ambassador Gordon Sondland: Public support for conspiracy theories about multiple Democratic figures, including former Vice President Joe Biden. Getting the Ukrainian leader to validate these conspiracy theories with pointless investigations and press conferences was the principal or only reason Trump was holding up military aid that had already been authorized by Congress.

But even with this glaring proof that chasing down conspiracy theories can lead down a dark path into bad political decisions and outright criminal behavior, it appears that Republicans have not lost one bit of their enthusiasm for hyping misinformation and trying to generate misleading "breadcrumbs" that right-wing media can use to spin out ever more ridiculous conspiracy theories about perceived political enemies. If anything, in the wake of the impeachment inquiry, they're doubling down.

On Monday, the House Intelligence Committee released full-length transcripts of closed-door testimony from Marie Yovanovitch, the former U.S. ambassador to Ukraine, and Michael McKinley, former senior adviser to Secretary of State Mike Pompeo. These transcripts were notable mostly because they helped fill out the larger picture of Trump's Ukrainian extortion scheme, but, as a Washington Post analysis by Rachael Bade and Karoun Demirjian explains, the transcripts also expose Republicans' disingenuous and grasping efforts to defend Trump.

For instance, Republicans have publicly complained about the closed-door sessions, accusing the Democrats running the inquiry of hiding something. But in the depositions themselves, they've had the opposite complaint, complaining that information gathered in the sessions was being leaked to the public.

These transcripts also show that Republicans are shamelessly backing Trump's existing conspiracy theories, and keep on fishing for information that could be used to generate even more conspiracy theories meant to discredit the impeachment inquiry. They kept pushing Trump's false claims about Biden or his theory that the Democrats had worked with Ukraine to frame the Russians for the 2016 election interference, or hinting that Yovanovitch was leaking unflattering information about Trump, to which she didn't actually have access.

At one point, Rep. Mark Meadows, R-N.C. — one of Trump's most enthusiastic defenders — even tried to raise suspicions about Yovanovitch choosing to go by the name "Masha" instead of her given name, Marie. At this point, she replied, "Despite my posting to Ukraine, I’m actually half Russian, and it’s a Russian nickname."

Whatever "gotcha" Meadows was trying to run down, it seemed that was undermined by Yovanovitch's heritage, and he abruptly dropped that line of questioning.

While Republicans shake down witnesses for any crumbs they can use to create conspiracy theories to shill on Fox News, Giuliani — apparently completely undeterred by the fact that his the behavior led to the impeachment inquiry in the first place — is apparently still working on the plot to smear Biden with false allegations of corruption.

As Broderick explains, Telizhenko has been out hustling in the right-wing media for some time now, pushing the bonkers conspiracy theory that Democrats stole their own emails and threw the election to Trump in order to frame the Russians for it. Fans of this theory — which again, accuses Democrats of throwing the election to Trump — include Giuliani, Trump sycophant Rep. Devin Nunes, R-Calif., and Attorney General Bill Barr. It has also been promoted by Ken Vogel at Politico, before Vogel moved on to the New York Times, where he has continued to elevate Trump's conspiracy theories while ignoring Trump's crimes.

Telizhenko's motives are obscure, though Broderick believes he may simply Telizhenko enjoy the access and attention that peddling conspiracy theories brings him. But it's also true that Trump's now-imprisoned former campaign manager, Paul Manafort, was really interested in hyping this conspiracy theory, which likely pleased his Ukrainian contacts who are purportedly tied to Russian intelligence.

Of course, as those previous paragraphs show, there is no way to debunk right-wing conspiracy theories these days without sounding a bit like a conspiracy-monger yourself. Which is of course part of the point. All these endlessly complicated and confusing stories and competing claims couldn't be better designed to convince ordinary people that it's pointless to figure out who is lying and who is telling the truth, and they may as well throw up their hands and give up on politics altogether.

This is why Republicans continue to push wild conspiracy theories, even after the impeachment inquiry ought to have reminded them what such behavior can lead to. The grim fact is that conspiracy theories work. At the end of the day, they're a propaganda tactic meant to flood the discourse with so much noise and distraction that it's impossible for regular people to figure out what is true and what is not.

On Tuesday, a free speech group called Freedom House released a report showing that propaganda may be a bigger threat to public discourse than censorship. Authoritarians trying to preserve their power find that flooding the airwaves and the internet with lies is more effective at obscuring the truth than any direct attempt to crack down on the flow of information.

"Many governments are finding that on social media, propaganda works better than censorship," Mike Abramowitz, president of Freedom House, said in a statement.

Trump and his fellow Republicans know this instinctively. They can't stop the flow of factual information coming out of the impeachment inquiry, but they can try to undermine or counteract the truth with firehose of lies and conspiracy theories. Tell enough lies, and eventually the public can't tell up from down and black from white. The result, perversely, is that central instruments of democracy, including freedom of speech and the free press, are being weaponized in order to dismantle it.

So Republicans continue to chase down conspiracy theories, even at considerable personal and political risk, because they don't have any better option. The truth is too damning and censorship isn't actually possible. Their most viable path to victory, then, is to tell so many lies that the truth can't climb out from under the pile to see the light of day.