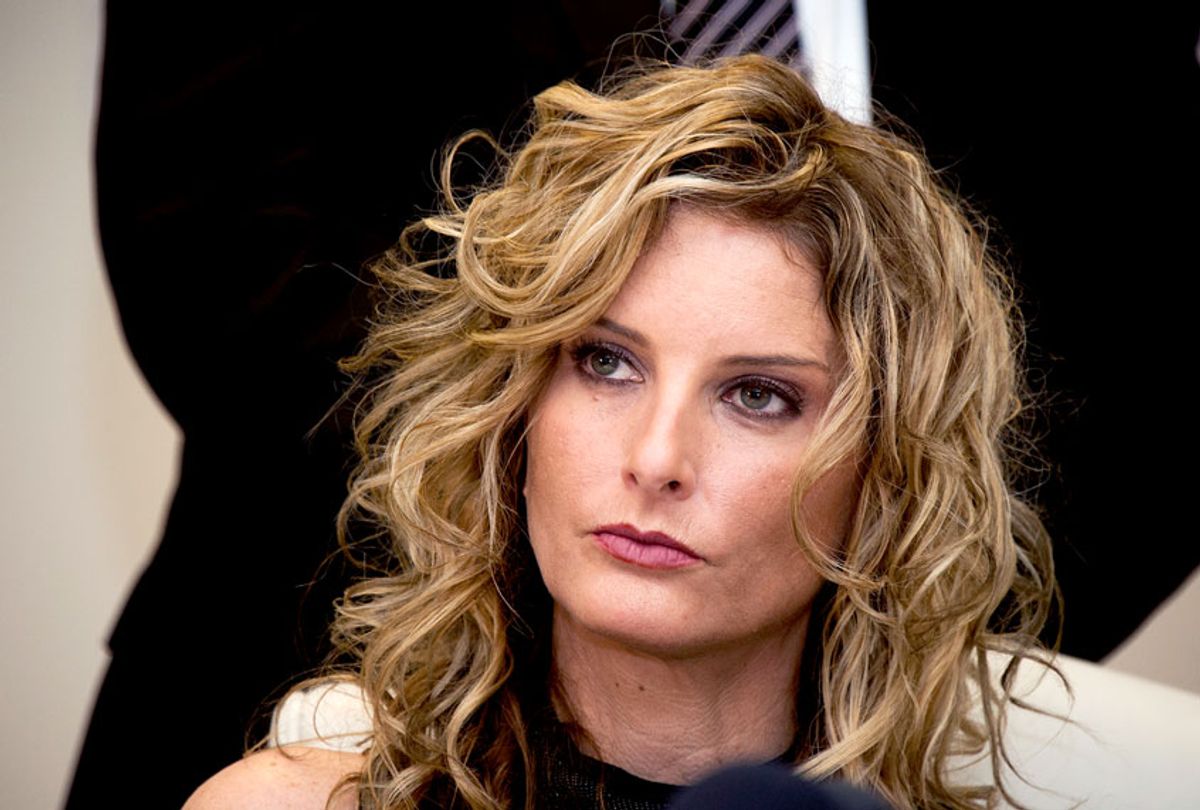 Summer Zervos attends a press conference with her attorney Gloria Allred (not seen) to announce the filing of a lawsuit against President-elect Donald Trump, in Los Angeles, California, on January 17, 2017. The lawsuit alleges that Trump had engaged in sexually inappropriate conduct with her. (VALERIE MACON/AFP via Getty Images)
--

President Donald Trump's cell phone records show he made a call to former "Apprentice" contestant Summer Zervos on the day she claims that he kissed and groped her without her consent, according to her lawyer.

Court filings obtained Monday by the Associated Press indicated that Zervos received a call from Trump's phone in December 2007, when she says he rang to invite her to dinner. She claims that she agreed to go in the hope of receiving some career advice, but Trump sexually assaulted her when they met.

The records suggest that Trump called Zervos the day after — and then several other times during the following months. Her lawyers say the phone calls back her allegations against the president.

Trump lawyer Marc Kasowitz said Monday that Zervos' claims were "entirely meritless and not corroborated by any documents."

Zervos, a California-based restaurateur and Republican, appeared on the Trump-hosted reality show "The Apprentice" in 2006. Zervos alleges that she later contacted Trump in the hopes of furthering her career.

She claims that the then-businessman made unwanted advances toward her twice in December 2007: once in his Trump Tower office in New York and later at the Beverly Hills Hotel in California.

The phone records show "that numerous specific details that Ms. Zervos has provided about those interactions are true," her attorney, Mariann Wang, wrote in a previously redacted portion of an Oct. 24 court filing. (At the time, Trump's lawyers were reportedly objecting to the public disclosure of the phone records but have since dropped their opposition.)

The phone records, which are for a now-defunct Trump cell phone number that leaked during the campaign, reveal a call was made to Zervos from Los Angeles on Dec. 21, 2007, when Trump's calendar indicates that he was due to fly there and head to the Beverly Hills Hotel.

A call to Zervos from Beverly Hills followed the next afternoon — the day Zervos claims that she briefly met Trump at his Los Angeles-area golf course.

The phone records also show two calls from Zervos to Trump's cell phone on Dec. 26, 2007. Zervos claims that she received what she considered a low-salary job offer from the golf club. She alleges that she told Trump she felt she "was being penalized for not sleeping with him."

The records reportedly reveal two more calls from Zervos in January and February 2008. She has claimed that she had "a subsequent conversation about a job" with Trump and was told to stop using his private number.

Zervos is among more than a dozen women who came forward with sexual assault accusations against Trump during the 2016 campaign. She is suing Trump for defamation after he called her a liar when she accused him of assault that October.

Zervos claims that she contacted lawyers about the allegations as early as 2011 and reached out to Fox News about the matter in 2015, CNN reported last month, citing the Oct. 24 court filing.

"The fact that plaintiff sought legal counsel in 2011 and spoke about this to others, including a news organization — years before the events of 2016 at issue in this case — strongly supports the inferences that her core narrative is true," Zervos' lawyer Mariann Wang states in the filing, citing calendar entries and emails to support the claim.

Zervos is reportedly seeking a retraction, an apology and damages.

Trump has denied assaulting Zervos, and his lawyers have argued his statements were opinions, which he had free speech right to express. His attorneys have reportedly tried to get the case dismissed — or at least delayed — until he is no longer in the Oval Office.

The two sides reportedly agreed to a Jan. 31 deadline for the president to undergo a deposition.

The news came hours after prominent advice columnist E. Jean Carroll, who accused Trump earlier this year of sexually assaulting her more than 20 years ago, filed a defamation lawsuit against the president.

The suit, filed in New York State Supreme Court, alleges that Trump "through express statements and deliberate implications, accused Carroll of lying about the rape in order to increase book sales, carry out a political agenda, advance a conspiracy with the Democratic Party and make money."