John Mulaney needs to play all of history's weird men

From the mustachioed J.J. Bittenbinder to Henry David Thoreau on "Dickinson," the comedian occupies a unique niche 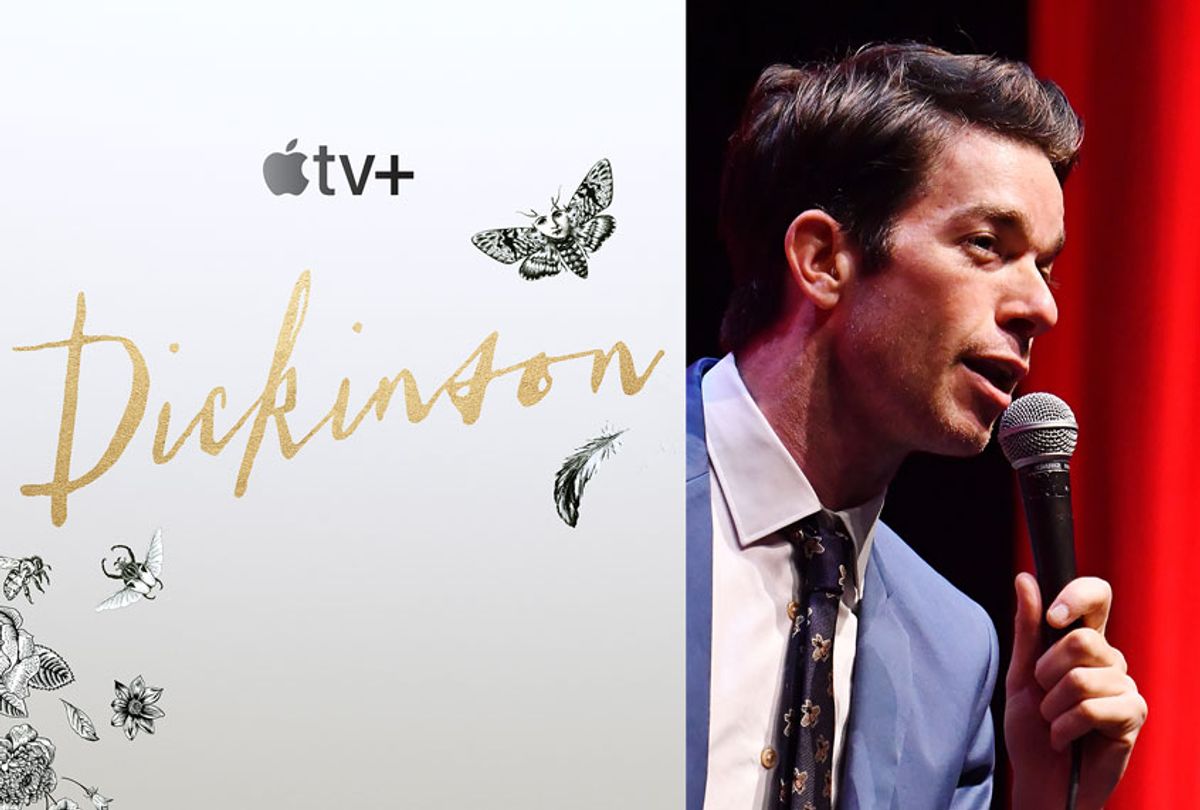 I’ll just go ahead and say what everyone is thinking; the new Apple TV+ streaming service that debuted on Nov. 1 is kind of a bust. Of its handful of  original offerings, the sci-fi series “See" starring Jason Momoa is a show that thinks it has BDE — that’s, uh, “Big Dystopia Energy." It's presented with such sincere ambition that, as a viewer in a post-“Game of Thrones” world, you want the execution to match up to the attitude (but so far, it doesn’t). “For All Mankind” plods through alternate history and space. Other than the scenes of Jennifer Aniston yelling at Bad Men, “The Morning Show” is underwhelming.

But I’m here to tell you that you should still at least sign up for the streaming service’s one-week free trial for one immensely compelling reason: comedian John Mulaney’s turn as Henry David Thoreau.

In the fourth episode of “Dickinson” — a Billie Eilish and Lizzo-scored, twerk-filled rendering of the titular poet Emily Dickinson's life — Mulaney embodies the famously misanthropic essayist. He’s on screen for only approximately seven minutes, but it’s such an uncannily, unexpectedly perfect reconsideration of Thoreau that it renders the episode completely memorable amidst the sludge pile that is Apple TV+’s otherwise forgettable content.

I say reconsideration because while Thoreau is remembered, thanks to works like “Walden,” as a man who sought the truest version of himself in the wilderness — alone and completely reliant on the natural world around him — he was famously arrested by the town jailer for tax evasion who caught him while running his weekly errands in town. He was a man who “wanted to live deep and suck out all the marrow of life, to live so sturdily and Spartan-like as to put to rout all that was not life,” but who was a man-child whose mother did his laundry.

In her 2015 New Yorker piece, “The Moral Judgments of Henry David Thoreau,” Kathryn Schulz wrote that “it is true that Thoreau was an excellent naturalist and an eloquent and prescient voice for the preservation of wild places.”

In many ways “Walden” is a “Christmas in Connecticut” story; though instead of scribbling the “Diary of a Housewife” column in a cramped urban apartment in the style of Elizabeth Lane, Thoreau probably munched on the food his sister often delivered to him while writing about eating only the food his hands had raised. As someone with half an MFA, I can assure you that this hypocrisy was and will continue to be the fodder of many English department happy hours.

And it is the backbone of Mulaney’s performance as Thoreau.

In this episode of "Dickinson," Emily (Hailee Steinfeld) treks to Walden Pond in hopes of meeting Thoreau and convincing him to write a letter that will persuade the railroad company that received the greenlight to cut through her town to spare her favorite tree in the construction.

“This is not how he described it in the book,” Emily says to her companion, George (Samuel Farnsworth), as she surveys the pond packed with visitors picnicking on the shore. “Yeah,” he responds. “It’s way more fun.”

There they meet Thoreau’s mom, laundry basket in hand, who offers to lead them to her son’s cabin; she has to collect his dirty trousers anyway. That’s when Mulaney, in a stained shirt and full-on neckbeard, answers the door in a huff, “Oh, more cheap society.”

His mother scolds him that he should be more pleasant to his guests, and he finally invites them in. “I hope you’re not hungry,” he says. “Because all I have is beans.”

(This is, by the way, not just a great line; it’s one that nods to actual historical fact. Thoreau was straight-up obsessed with his bean garden, writing of it, “I came to love my rows, my beans, though so many more than I wanted. They attached me to the earth, and so I got strength like Antaeus.”)

Over the next few minutes, Thoreau deftly crushes Emily’s spirit by displaying his callousness and hypocrisy, before finally spitting out the final line: “Never meet your heroes.”

Through his work as a writer on “Saturday Night Live,” his turn on Broadway as a crotchety Upper West Sider in “Oh, Hello!” and in his standup, like the critically acclaimed 2018 Netflix stand-up special “Kid Gorgeous at Radio City,” it's apparent that Mulaney has a knack for personifying eccentric characters in intensely memorable ways.

Right now, I’m thinking of "Kid Gorgeous" larger-than-life personality J.J. Bittenbinder — a real detective who, according to Mulaney's colorful account, visited the comedian's school when he was a child. Bittenbinder wore three-piece suits, a pocket watch, and a cowboy hat and delivered his own version of “Stranger Danger,” which he dubbed “Street Smarts.”

“‘Let’s say a guy pulls a knife on you to mug you. What do you do? You go fumbling for your wallet. And you go fumbling for your wallet. Well, in that split second, that’s when he’s going to stab you. So here’s what you do. You kids get yourselves a money clip. Okay, you can get these at any haberdashery. You put a $50 bill in the money clip then when a guy flashes a blade, you go, ‘You want my money, go get it!’”

Bittenbinder is now part of the pop culture lexicon (though the real Bittenbinder isn’t exactly glad to be there), much in the way of Bill Hader’s breakout character Stefon, which Mulaney helped create. His take on Thoreau can join those ranks. Through his work, Mulaney embodies men who are bizarre and flawed and totally singular. As Thoreau wrote, “Go confidently in the direction of your dreams. Live the life you have imagined.” I imagine a life where Mulaney plays all of history’s weird men.

"Dickinson" Season 1 is available to stream in its entirety on Apple TV+. "Kid Gorgeous" is currently streaming on Netflix.