Milwaukee mayor blames Trump after Latino man burned with acid, told "go back to your country" 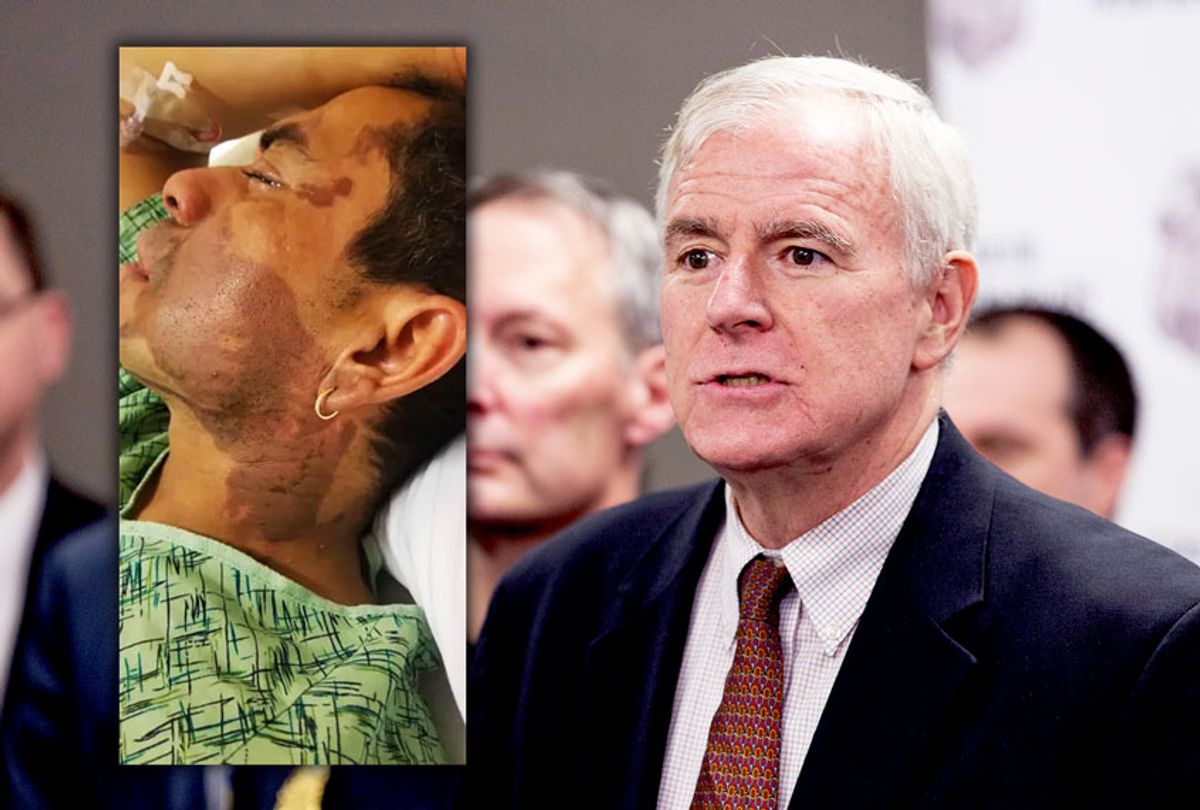 Milwaukee Mayor Tom Barrett blamed President Trump after a Latino resident — who is an American citizen — was attacked with acid on the street by man who called him an “illegal” and told him, “Go back to your country.”

Barrett said the attack was “obviously” a hate crime. A 61-year-old man was arrested in connection with the attack, WISN reported.

The attack comes just months after Trump joked about a fan calling for immigrants to be shot at the border and told a group of Democratic congresswomen of color “go back” to countries “from which they came.” (All but one of the four were born in the U.S.)

Mahud Villalaz, a 42-year-old U.S. citizen who was born in Peru, said at a news conference on Monday that a man began accusing him of invading his country while Villalaz parked his truck near a restaurant.

“I think I pissed him off because I told him, ‘This is my country. This isn’t your country. Everybody came from somewhere else here,'” Villalaz told WISN.

As Villalaz went to enter the restaurant, he said, the man threw acid at his face.

"The feeling was burning, and I tried to defend myself, but I couldn’t because I couldn't open my eyes," he said.

WISN reporter Chernéy Amhara shared photos of Villalaz’s facial injuries after the attack and reported that he suffered second-degree burns.

"I believe (I) am a victim of a hate crime because (of) how he approached me telling me to 'get out this country,'" Villalaz told Amhara. "This is pretty much a terrorist attack."

"Thank God he didn’t have a gun and shoot me," he added.

Surveillance video of the incident shows the suspect raise his finger at Villalaz. Villalaz is seen motioning back at the man before the suspect throws liquid at his face.

Villalaz’s family has started a GoFundMe campaign to raise money for his medical expenses.

His sister, Priscilla Villalaz, wrote on the page that the encounter began because her brother parked in the wrong place. After her brother moved his car, the man yelled, “You guys come here and don’t obey my laws. You and your people are invading my country,” she wrote.

“Today, my brother can't see with his left eye and half of his face is burned,” she wrote. “My brother is a welder. Because of his injuries, he will not be able [to] work until his burns heal and he is fully recovered.”

The Milwaukee Journal-Sentinel later identified the suspect as 61-year-old Clifton Blackwell, a military veteran whose family says he has been treated for PTSD. He was previously convicted of false imprisonment and intentionally pointing a firearm at another person. He was deemed not competent to stand trial and committed to an institution before being released. A neighbor told WISN that Blackwell, who is retired, could be “very rude, confrontational, very aggressive, so it doesn’t surprise me.”

“We need those elected officials who are spreading racial hatred to knock off the rhetoric that is designed to divide us,” he said. “Instead, we need to work to heal the wounds that have been gashed open in the last few years. We as a country are better than this. Milwaukee is better than this.”

Darryl Morin, the president of Milwaukee-based advocacy group Forward Latino, said at the news conference alongside Villalaz that he believes the attack was planned.

"I don't see how it could be anything else, as this is, sadly and tragically, a textbook case of hate," Morin said. "I dare say it was premeditated — because no one walks around with a bottle of acid and hangs out in a predominantly Latino neighborhood for no reason."

Villalaz said at the news conference that he was at a loss for what to tell his son after the attack.