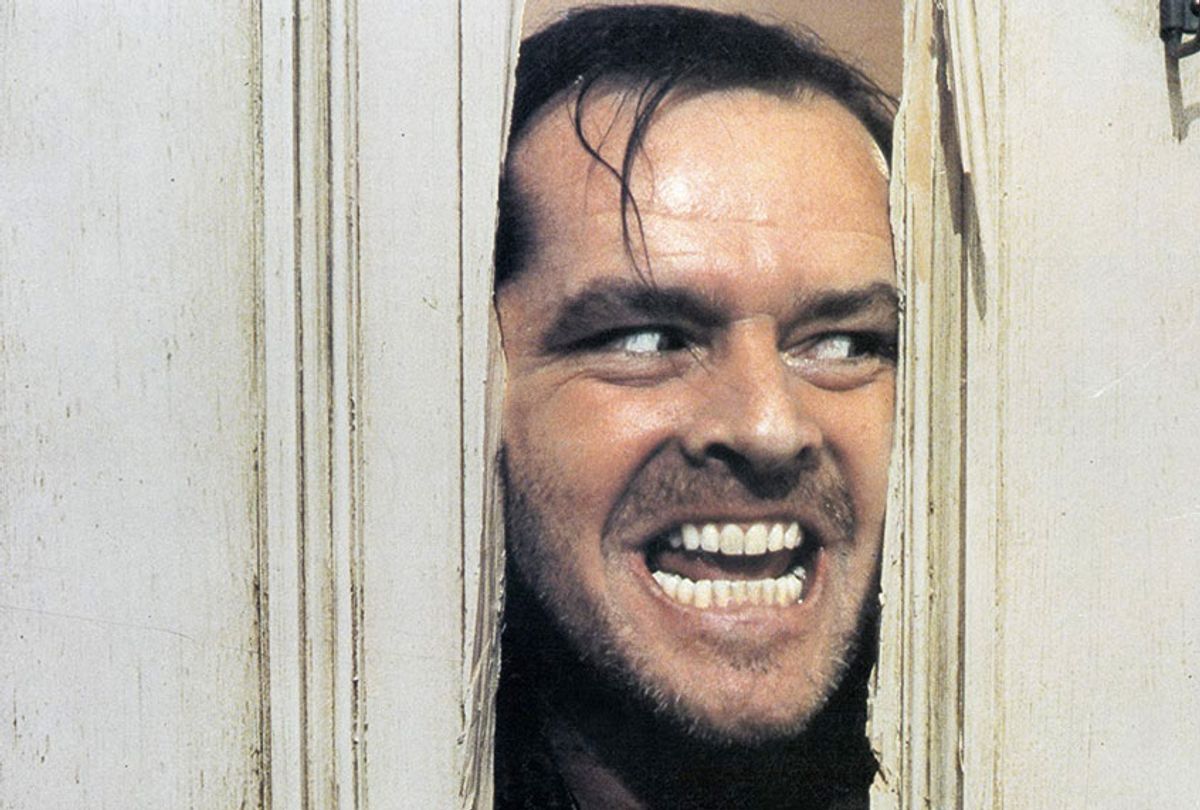 If there is one thing you should know about "The Shining" (1980), it is that the classic Stanley Kubrick film isn't just scary — it is also, in its own odd way, defined by a hopeful perspective on life and death.

This isn't obvious at first glance. When casual moviegoers think of "The Shining," their minds instantly conjure up some of the most iconic scares in the history of cinema: alcoholic hotel caretaker and aspiring writer Jack Torrance (Jack Nicholson) smashing a bathroom door with an axe and gleefully proclaiming "Here's Johnny!"; young child Danny Torrance (Danny Lloyd) having visions of elevator doors opening up and releasing waves of blood through the hallways; Danny riding his tricycle through the hotel and encountering two young girls, both ghosts, who urge him to "come play with us, forever and ever"; the word "redrum" being repeated by Danny until his mother realizes that it is "murder" spelled backward; dutiful and timid wife Wendy (Shelley Duvall) reacting with terror as she sees that her husband spent the countless hours in his study not writing a book, as he claimed, but retyping the sentence "All work and no play makes Jack a dull boy" thousands of times.

Yet despite its famous scary moments, "The Shining" is at its core an optimistic film — or, at least, as optimistic a movie as a cold, cynical filmmaker like Kubrick was capable of creating — and that fact is one of many that needs to be understood by anyone who wants to fully appreciate the long-awaited sequel "Doctor Sleep" (which, like "The Shining," was adapted from a Stephen King novel of the same name).

Indeed, before seeing "Doctor Sleep," there are several things that you should first know about "The Shining."

1. Stanley Kubrick believed that ghost stories were fundamentally hopeful because they implied that there is life after death.

As film scholar Norman Kagan wrote in the 1989 book "The Cinema of Stanley Kubrick" (which I highly recommend to Kubrick fans), the director opined that "ghost stories appeal to our craving for immortality. If you can be afraid of a ghost, then you have to believe that a ghost may exist. And if a ghost exists, then oblivion might not be the end."

Kubrick reportedly expressed a similar thought to King while working on the film. In the 2000 book "The Complete Kubrick" by David Hughes, the famous story is recounted, courtesy of a Stephen King interview with American Film magazine. The author received an early morning phone call from Kubrick who shared his theory about ghost stories being fundamentally hopeful. King replied, "But what about hell?" Kubrick paused and then simply stated, "But I don't believe in hell."

This metaphysical philosophy is suffused throughout "The Shining." Although Jack dies at the end, the final shot confirms what the rest of film had hinted at — that he was the reincarnation of a previous hotel caretaker, and by implication that his soul would return to this world. Kubrick himself said that the last image of his movie "suggests the reincarnation of Jack." Also noteworthy is how Wendy and Danny aren't overcome by the evil of the hotel, but instead prove through their actions that they are good human beings. Since happy endings are not guaranteed in Kubrick's filmography, the fact that they not only survive but do so with their morals intact is significant. Danny resists the hotel's attempt to make him murder his mother, and Wendy, despite originally making excuses for her husband's physically abusive behavior, learns how to stand up to and ultimately defeat him. In that sense, "The Shining" is as much a story about how the human spirit can prevail as it is one about its capacity for malevolence.

2. Jack was a bad guy before he moved the family to the Overlook Hotel.

In one of the many deviations from the novel that King found objectionable, Kubrick's movie depicts Jack not as a good man corrupted by an evil hotel, but as a bad man whose inner evil is brought to the surface when he returns to the literal demons that always haunted him. Prior to going to the hotel he had dislocated his son's shoulder in a fit of alcoholic rage, was condescending to his wife, and could be considered to be in a "good mood" when he was merely passive aggressive instead of aggressive. As Kubrick later observed, "There's something inherently wrong with the human personality. There's an evil side to it." This simmered beneath the surface in Jack long before he went to the hotel, and the Overlook doesn't change him so much as grotesquely exaggerate those latent qualities.

In a sense, the plot of the movie is merely the unmasking of Jack's evil personality for his family to see. The story begins with Jack dragging his family to the Overlook Hotel, where he learns that a previous caretaker had murdered his wife and two daughters. Despite being warned that the isolation of caring for the remote building could lead to madness, Jack stays anyway and is drawn to the evil specters that haunt both the estate and his own soul. (It is likely not a coincidence that Jack is a recovering alcoholic, nor that his literal intoxication at the hands of the ghosts coincides with his figurative intoxication by the hotel.) Ultimately, he tries to murder his wife and child — and succeeds in murdering Dick Halloran (Scatman Crothers), the hotel's head chef — before being killed himself when he is tricked into getting lost in a giant hedge maze, eventually freezing to death.

Because these horrors are all derived from one man's twisted personality, the plot is best understood in the context of Jack Torrance being a bad person whose capacity for evil is finally realized. Yet because Kubrick's film posits that there is life after death, and the two innocent characters are spared death altogether, it emerges as an inspiring tale rather than a merely tragic one for all of its main participants.

3. Kubrick's movie was also about how violence is cyclical — the times and characters may change, but the acts of aggression never do.

The most obvious example here is how the murders of the earlier caretaker's family members is echoed by Jack's attempted homicides against his wife and child, and the movie certainly establishes that those two events are connected to each other. Yet the movie also touches upon a seemingly unrelated subject — the legacy of colonial exploitation. While the movie could have settled with using "hotel built on a Native American burial ground" as a simple excuse for why the building was haunted, Kubrick gives Jack throwaway lines about "the white man's burden." He feels a kinship with the American pioneers who settled the Wild West, speaking glowingly of them even as he tells the gruesome story of the cannibalistic Donner Party. He repeats a racial slur about the African American Dick Halloran and in one scene angrily and repeatedly throws a ball at Native American artwork displayed in the hotel. The legacies of racial violence are quite present here.

So too is the theme of domestic violence and misogyny.  Jack shows open disdain and dismissiveness toward his wife even before they go to the Overlook Hotel, and while there, he doubles down on patriarchal behavior. He expects her to take care of him while he "works" at writing his non-existent novel, screams and orders her around at arbitrary moments, and talks to other ghosts about how "you can't live with or without" women. This makes it all the more satisfying when Jack is unable to assert the ultimate form of domination over Wendy (by taking her life), but it doesn't erase the fact that her life was for a long time defined by her husband's violent behavior.

Even the design of the hotel seems like a metaphor for how violence is inescapable. With its labyrinthine hallways and massive rooms, it is daunting if not impossible for Wendy and Danny to figure out how to run away from the evil that surrounds them. Not only does it confuse them, but it also exhausts them physically and emotionally . . .  much as living with an abuser physically and emotionally drains its victims. Since the hotel is itself violent (or, to be more precise, brings out the latent violent tendencies in others), it becomes the literal manifestation of violence from which it seems there is no escape. This makes it all the more rewarding when Wendy and Danny do escape from it: Their triumph feels earned, given the daunting odds against them.

4. If "Doctor Sleep" is going to be a worthy sequel to "The Shining," it needs to be equally intelligent.

Because "Doctor Sleep" director and writer Mike Flanagan has said his film is a sequel to the movie of "The Shining" and not the book, it is reasonable to say that he needs to achieve the lofty heights of Kubrick in this movie. Flanagan's resume suggests that he may be up to the challenge. He has made great horror movies like "Absentia" (2011), "Oculus" (2013), and "Ouija: Origin of Evil" (2016), as well as the Netflix series "The Haunting of Hill House" (2018). At the same time, being so immersed in the horror genre could have its drawbacks. Kubrick's "The Shining" seems to transcend the typical trappings of horror because Kubrick himself had never and would never again make a so-called "scary movie." His previous films ranged from lavish historical epics, tragic war stories, and hardboiled crime dramas to dystopian thrillers, cerebral science fiction, and subversive political parodies. Because he was a masterful director, Kubrick could work in multiple genres and still tell stories that felt unique to his detached, misanthropic style of analyzing the human animal.

It is that intellectual Kubrick — the one who prepared for "The Shining" by reading Sigmund Freud's essay "The Uncanny" and Bruno Bettelheim's book "The Uses of Enchantment" — that Flanagan needs to channel if his film is to be worthy of its predecessor. Because "The Shining" is one of the greatest movies ever made, it will not be satisfactory if "Doctor Sleep" is merely good. Kubrick was a man who famously forced his actors to do dozens of takes because he wanted his films to turn out perfectly. Flanagan will need to have applied a similar zeal to his project, and it will need to be evident on the screen, for him to live up to "The Shining."

"The Shining" is available to rent on demand. "Doctor Sleep" is in theaters on Friday, Nov. 8.