With the help of teachers unions, the climate strikes could be moving into phase two 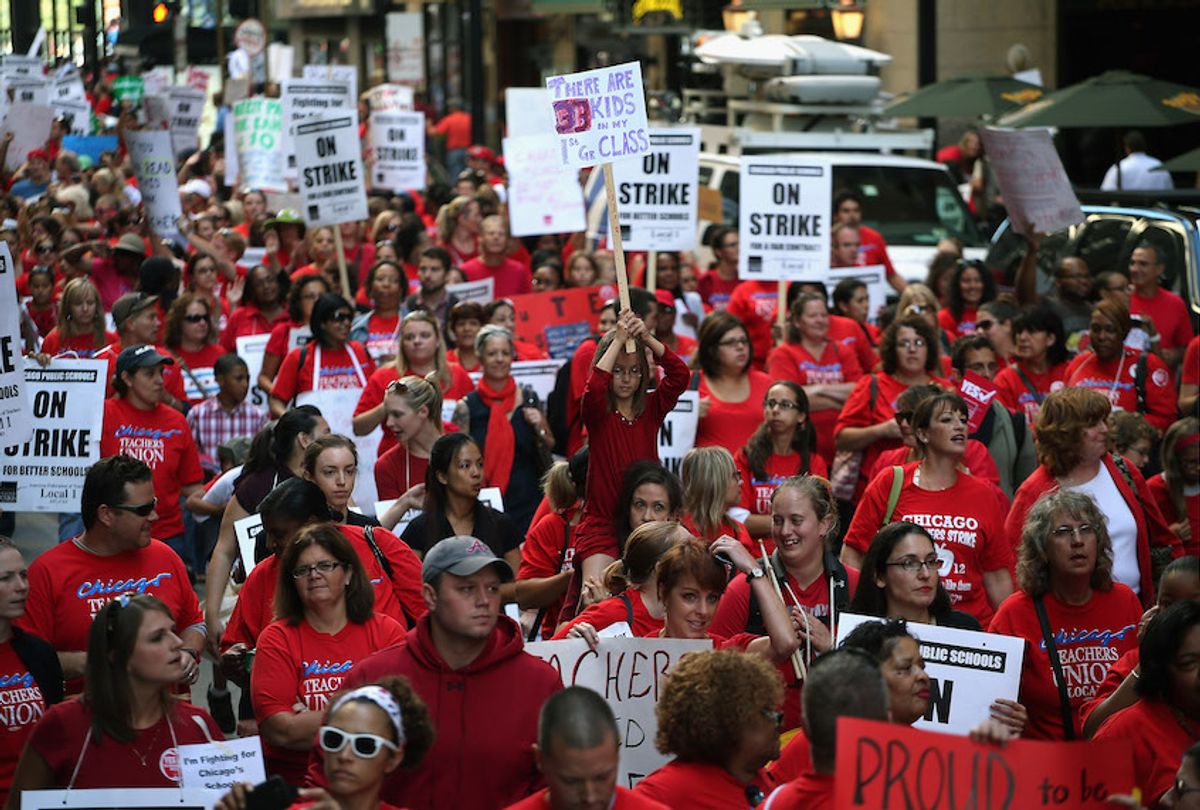 Thousands of Chicago public school teachers and their supporters march through the Loop and in front of the Chicago Public Schools (CPS) headquarters on September 10, 2012 in Chicago, Illinois. More than 26,000 teachers and support staff hit the picket lines this morning after the Chicago Teachers Union failed to reach an agreement with the city on compensation, benefits and job security. With about 350,000 students, the Chicago school district is the third largest in the United States. (Photo by Scott Olson/Getty Images) (Photo by Scott Olson/Getty Images)
--

As young people across the country join the global movement to mobilize school strikes to demand climate action, one group is starting to think more seriously about how to best support those efforts: their teachers.

Educators, like those in the California Federation of Teachers and the Massachusetts Teachers Association (MTA), are beginning to leverage their power both as teachers and union members to push the bounds of climate activism.

Kurt Ostrow, a high school English teacher in Fall River, Mass., has helped lead his union to the forefront of the climate movement over the last few years.

“Climate to me has always been the major crisis that needs to be addressed, and even though in the classroom I really try to prioritize it, it just doesn’t feel always enough,” he says. “So I have been trying to use the leverage that we have a as union of 110,000 people to support the movement.”

In his first year of teaching five years ago, Ostrow went as a delegate to MTA’s annual meeting, where the union’s social justice caucus — Educators for a Democratic Union — sought a teacher to introduce a resolution (known as a “New Business Item”) recommending the divestment of state pension plans from coal. Ostrow’s college friends had been leaders in the campus divestment movement, and he had always participated in their actions as an ally, so he was happy to volunteer to introduce it.

“We lost a quorum, so we weren’t able to take a vote on it, but the next year we did it again and it passed,” he said. “That was really how I first dipped my toes in.”

When the youth climate strikes took off last year, Ostrow, who now serves on the board of his statewide union, began thinking harder about how teachers could help them. At its March board meeting, he decided to introduce a resolution that the MTA would support the youth climate strike scheduled for March 15. It passed unanimously.

At the union’s next annual meeting, held in May two months later, leaders of the social justice caucus deliberated over what environmental resolutions they should introduce to best support the Green New Deal.

“I knew we could put forward a resolution that said MTA supports the Green New Deal, and I think that would have passed easily, but I really wanted to create a decision point, like a ‘which side are you on’ moment that would really force teachers to confront their own conscience,” he told In These Times. “So I decided to go radical, and I put forward a New Business Item calling for the MTA to propose a national teachers strike in support of the Green New Deal.”

It’s illegal for teachers to strike in Massachusetts, and following Ostrow’s impassioned speech at the conference, there was some heated debate. In the end, though, it passed.

Ostrow was pleasantly surprised. “I’m a member of the Sunrise Movement, and my dream is to try and coordinate our efforts with Sunrise’s long-term vision of striking for a Green New Deal,” he said. “So I was just trying to plant the seeds in members’ brains, but to be honest I hadn’t done any organizing around it. I wasn’t calling other locals and saying, ‘hey there will be this NBI and will you support it?’”

At the National Education Association’s (NEA) annual meeting in July, an MTA delegate introduced a resolution for the national union to also call for striking in support of the Green New Deal. It failed, with too many members nervous about the legality of such a move.

The next month, two high school students who were organizing for the September 20 global youth climate strike came out to the MTA’s August board meeting and asked the union to pass something backing their efforts.

The union did, and also upped its engagement in the weeks leading up to September 20.

“For the March strike, we just endorsed it, issued a press statement, and Max Page [the union’s vice president] spoke at a rally,” said Ostrow. “There wasn’t a lot of coordinated effort.”

Leading up to this strike, explained MTA’s president Merrie Najimy, the union did more outreach, and organized a statewide conference call with members to discuss how to get involved. “Our legal department wrote an advisory where the gist was to say you have this right to participate, and as an organizer you can push your principal, your superintendent, to make this a field trip day,” she said. “You have the right to take a personal day.”

On the day of the strike, Ostrow took his students down to a climate rally as part of a class field trip. He knows he was fortunate: In New York City, the school district, despite saying students could receive excused absences for participating in the climate strike, issued an order that barred teachers from going. The city’s education department decided that any employee participation, including class field trips or even staging walkouts on school property, would violate rules of ensuring a “politically neutral learning environment.”

The MTA’s work has continued since the strike. Last month at its latest board meeting, the union officially endorsed the Green New Deal, and a new member-driven climate crisis team is holding its first meeting in November. “Our goal will be to figure out how we can push the MTA to take more and more radical actions in support of the Green New Deal,” Ostrow said. One possible tactic is taking collective sick days. “If you can take off to take care of your kids, well the fact is Mother Earth is sick,” he said.

MTA is not the first teacher union to endorse the Green New Deal. In March, the 120,000-member California Federation of Teachers passed a resolution in support of it, and was actually the first statewide labor organization in the country to adopt a climate justice agenda in 2016. That agenda includes support for fossil fuel divestment, for enacting climate legislation, and for educating members and students about the crisis.

So far the national teacher unions have been more guarded.

AFT president Randi Weingarten marched with union members in New York City during the September 20 strike, but the statement she issued did not commit her labor organization to any real political action beyond educating children about the issues. “If we can help students learn about the science of climate change, help them understand free speech and citizen advocacy as part of civic education, and encourage their belief in themselves, we’ve done our job in helping the next generation secure their future,” Weingarten said.

Lily Eskelsen García, president of the NEA, has taken a similar approach. In a statement provided to In These Times, García said, “Educators around the nation are proud that their students are leading on climate change because they know it is an urgent threat. We teach our kids to be leaders in the classroom and their communities, so it is inspiring to watch them speaking up to demand action on the climate crisis from elected leaders.”

The NEA provides educators with resources to teach about climate change, and while delegates voted down the proposed resolution for a national strike at its most recent annual meeting, delegates did pass two less controversial measures — to encourage locals to compost, and to recommend schools incorporate the causes, effects, and solutions to climate change in their science curriculums.

Najimy, the MTA president, is more optimistic about growing activism from teacher unions. She pointed to a new working group on climate justice that’s forming with the national Bargaining for the Common Good network, a coalition of labor and grassroots organizations dedicated to leveraging union contracts for social justice. “When we go back to the bargaining table, we can use our power in labor to negotiate new ways of acting for the climate,” she said.

College faculty, like their K-12 counterparts, are also starting to organize in support of their students.

Leading up to September’s climate strike, a small group of professors organized an open letter calling on fellow educators to cancel classes and strike. Almost 830 people signed it. Two of the organizers, Jonathan Isham, an economics and environmental policy professor at Middlebury, and Lee Smithey, a peace and conflict studies professor at Swarthmore, co-authored a Guardian op-ed in late August urging the same thing. “We risk losing credibility with an entire generation of students if we cannot take action in support of the defining cause of their generation,” they wrote.

Isham works at Middlebury with environmental activist Bill McKibben, and he taught McKibben’s seven 350.org co-founders back when they were college students. In an interview, Isham said he understands it can be easier in some ways for college faculty to take off compared to public school teachers. He praised his university’s HR department for being supportive of faculty who wanted to cancel classes for the strike, as professors were given the option to take a personal day off. Isham doesn’t even teach on Fridays, so it was especially easy for him to participate in Middlebury’s rally that day.

“I think the number-one thing educators can do is educate, and share what we know about the climate crisis and climate instability with our students,” he said. “That is our primary job, but I like to say the classroom has porous walls, and I think it’s important to also get out in the world and stand up as a citizen."